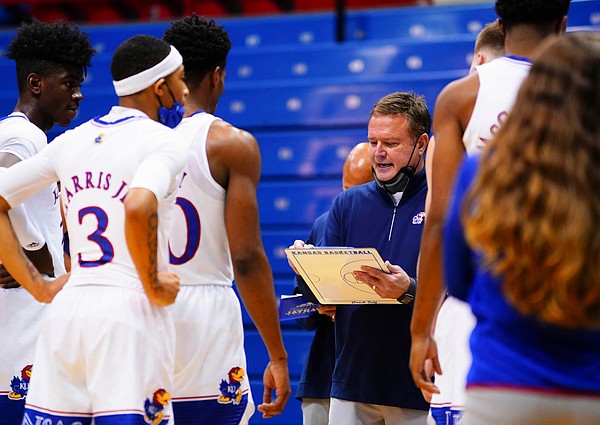 Kansas head coach Bill Self draws up a play late in the second half on Saturday, Dec. 5, 2020 at Allen Fieldhouse. by Nick Krug

A couple of quick notes of interest from Sunday’s Bill Self presser, previewing Tuesday’s season-opening game with Michigan State at the Champions Classic in New York City.

The game is slated for a 6 p.m. tipoff from Madison Square Garden. It will be televised on ESPN and followed by a showdown between No. 9 Duke and No. 10 Kentucky.

Already a fan of the event, Self said this year's two-game extravaganza may have a little extra juice, both because it's back in New York City and because it features the first game in the final season of Duke coach Mike Krzyzewski, who announced his retirement from coaching during the offseason.

"That definitely adds a lot of bounce and energy to it," Self said.

• Third-ranked Kansas will leave for New York early Monday afternoon and arrive in the early evening. From there, it's a business trip, with a team meal and regular prep on Monday night followed by a walk-through, shoot-around and team meetings on Tuesday.

Self said having the early game was a big advantage, as much for not having to wait around as for returning to Lawrence late Tuesday night/Wednesday morning at a reasonable hour.

• It sounds like Self is prepared to plug senior transfer Remy Martin into the starting lineup against the Spartans.

Without saying it directly, Self referenced Martin as a starter on a couple of occasions Sunday. The most notable came when he was asked about KU’s size against the length in Michigan State’s starting lineup.

“If Jalen (Wilson) was out there, I would say that we probably match up really well. Both teams,” Self said Sunday. “Taking Jalen out and inserting a 6-foot point guard — and they know we switch a lot — that is some positional challenges.”

Martin is one of two players on KU’s roster listed at 6-foot, and he is more of a true point guard than Drake transfer Joseph Yesufu.

Fifth-year senior Chris Teahan, a walk-on, started the exhibition game over Martin. But Martin played more minutes and was among the team’s leading scorers and assist men. What’s more, Martin appears to be built for games just like this one, making the move of little surprise to anyone paying attention.

Assuming he starts, Martin is expected to join Dajuan Harris Jr., Ochai Agbaji, Christian Braun and David McCormack in KU’s starting five. With Harris and Martin notably shorter than most of Michigan State’s lineup, Self said the size differential needed to be addressed.

• Super-senior guard Jalen Coleman-Lands is available to play against Michigan State. The transfer from Iowa State missed KU’s exhibition victory over Emporia State because of a toe injury that kept him out of practice for about a week. Self said Sunday that Coleman-Lands practiced twice since then.

“He’s practiced the last two days,” Self said of Coleman-Lands, who could help KU offset the absence of Jalen Wilson, who will miss Tuesday’s game while sitting out the second of a four-game suspension. “He’s not 100%, but he should be available to play unless he has a setback.”

• Self continues to sing the praises of the Champions Classic as the perfect way to open a college basketball season. When it first began, the event was typically the second or third game of the season for the four teams involved. But a few years ago, the NCAA moved it to opening night, giving the sport what is essentially must-see TV on Day 1.

“It’s a great way to tip off the basketball season,” Self said Sunday. “All eyes will be on the four teams that are playing there. There are other teams playing across the country (on Tuesday), but none of them are going to get the same exposure we’ll get that night, so I think I’m excited for that. You do this for a long time because there’s certain things that kind of get your motor running and your juices flowing. This is a great way to do that, not only with players, but for coaches as well.”

• Self said last week that he anticipated having a redshirt or two this season and that he would talk with his players after the exhibition portion of the schedule to see what they’re thinking and who might be open to the idea.

There was no news on that Sunday, but, from the sound of it, there could be soon.

“Nothing concrete at all yet,” Self said. “But you’ll know something if we do anything. By Tuesday. I promise."

I never thought I would ever find myself pulling for Duke. Just want to catch, or pass, UK this year for most wins. How big would that January 29th game be if we were one game behind or tied with them at the time?

Duke will kick Kentucky around like a rusty can. I will have to hit the “mute” button to avoid the Coach K adoration.

Well, we know he's going to redshirt Cuffe Jr., but who else? Pettiford seemed to get some good minutes and looks pretty solid for a Fr., but not likely to find his way into the rotation, so likely both of those guys get the red this year. Self can always pull Pettiford's redshirt if there is an injury or if extra mativation really needed to be metted out, but with Martin, D'Jaun, Yesufu, Braun, and Och I don't see those guys getting on the floor

Cuffe would make sense. He was originally supposed to be in HS this year anyway.

Pettiford seems like an unlikely RS to me. He’s the #3 PG without experience. He needs to get some because Yesufu, Braun, and Och are not PGs. At some time this season we might really need another PG. It’s the position where a lack of experience would be most noticeable/detrimental.

One of the 2 frontline freshmen would seem to be the other RS possibility to me.

In the past, I’m recalling the answer to size difference being ball pressure. I wouldn’t be surprised to learn (though we never will) that Coach Self was thinking ahead to this game when he didn’t start Remy in the last game. Even after the game when Remy played well, Coach chose to mention his defensive pressure as an area that needed improvement.

The good news is that Remy seemed to get it. Fully accepted responsibility for being to casual. Most people operate well below optimum (10). Even competitive athletes sometimes have to relearn each season to ramp up from practice (9 or less) to competition. The great ones compete at 11. That’s always Coach’s goal.