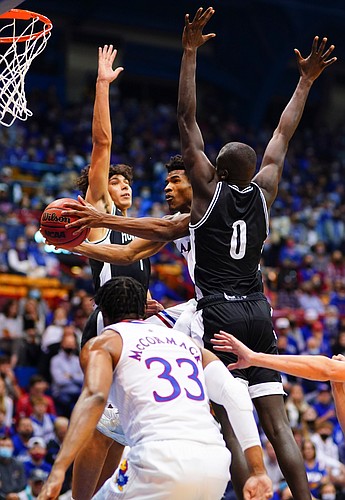 Kansas guard Ochai Agbaji (30) cuts through two defenders for a bucket during the first half on Wednesday, Nov. 3, 2021 at Allen Fieldhouse. by Nick Krug

If you’ve followed Kansas basketball at all in the past 18 years, you’ve surely heard KU coach Bill Self talk about the ball sticking.

Whether that’s from a player holding it too long on the wing before passing it or someone dribbling the leather off of the ball above the 3-point line, Self despises when players interrupt the flow of the offense by holding onto the basketball in an indecisive manner.

With the 2021-22 roster featuring so many newcomers who are still trying to figure out how to play for Self and what can earn them playing time, any tips or tricks that hammer home the message surely are welcomed.

Wednesday night, after the Jayhawks’ 86-60 exhibition win over Emporia State, Self provided one. And it’s something he picked up from San Antonio Spurs coach Gregg Popovich, who forever has utilized the rule with the Spurs and heavily emphasized it while coaching Team USA during the past couple of years.

“(It’s the) Gregg Popovich point-five rule,” Self said. “If you catch it, within .5 seconds you have to shoot it, drive it or pass it. And we’ve got guys that hold it. So that’s what we need to correct.”

That response came in a reply to a question about senior guard Remy Martin’s shot selection on Wednesday. Self said Martin may have taken one questionable shot during the Jayhawks’ easy win. But, overall, he sounded pleased with the way Martin got his 15 points, knocking in seven of 10 shots, including one of two from 3-point range.

There were times when Martin over-dribbled a little, and other moments when his lack of body movement — pass and go away — forced the ball to stick. But correcting that kind of thing, as Self eluded to in his answer, is something that will continue to be emphasized with all 18 KU players. That includes returning starters Christian Braun, Ochai Agbaji and Jalen Wilson.

Newcomer or veteran, old or young, the belief is that players can always improve in this area. That’s why Popovich continues to demand it from some of the best players in the world, and why so many coaches around the NBA have openly adopted the policy, too.

“A point-five mentality, it’s stolen from the Spurs like everyone else has stolen it from them," said Denver Nuggets coach Michael Malone in a 2019 article by thednvr.com, when talking about Popovich’s signature strategy. "A point-five mentality means don’t hold the ball. We don’t want guys holding, dribbling, iso-ing. If you’re open, shoot it. If you’re not open, get off the ball with a point-five mentality. That makes you and us as a team really hard to guard because the ball is going to move a hell of a lot quicker than the defense can.”

Getting rid of the ball quickly promotes body movement, which promotes lots of cutting and spacing, which leads to open looks and can lead to easy points.

“Basketball is a pretty easy game to figure out,” Self said. “You want to get as many easy baskets as you can and you don't want to give up many.”

The more these guys play together and blend their styles within Self’s system, the easier all of this will become. You have to know and trust your teammates fully before you’re comfortable flipping the ball to anyone of them with less than a second to make your decision.

For Self’s best teams, the point-five philosophy often has been second nature by mid-season. That’s why every practice, every rep and every game-day opportunity is so important for this Kansas team.

“I think we’re playing together and everybody likes each other,” said sophomore point guard Dajuan Harris Jr. “The chemistry, I don't think it’s there yet, but it’s getting there.” Self agreed.

“I think the chemistry is getting better,” he said. “But I don't see us being in mid-season form until mid-season.”

'Death to the weavers' era has just begun. It's bout time, coach.

Point-5 offense is exciting, fast, but can lead to lots of TOs - unless the team has sharp shooters + high confidence in shooting. And we might have the right players this season..