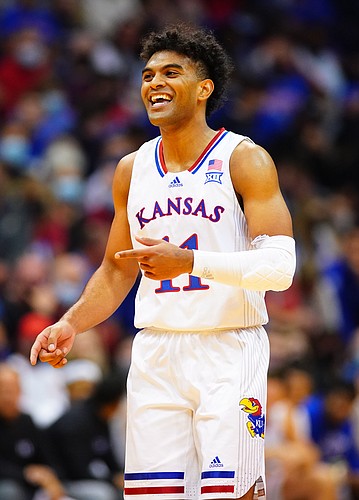 Kansas guard Remy Martin (11) flashes a smile after a bucket during the first half on Wednesday, Nov. 3, 2021 at Allen Fieldhouse. by Nick Krug

While all of the past numbers and preseason honors certainly painted Kansas guard Remy Martin as an automatic, Day 1 starter with the Jayhawks this season, Kansas coach Bill Self showed Wednesday night that nothing is a given with this program.

And Martin, who finished with 15 points, four assists and one turnover off the bench in the 86-60 exhibition victory, seemed to both understand that and receive the message loud and clear.

“I think I have to respond better in practice and do better things to deserve getting on the court,” Martin said when asked about not starting in his first unofficial KU game. “It’s something that I’ve got to figure out, and he’s challenging me, which I appreciate. It’s just all for the better of myself and the team.”

Before diving into the topic any further, it’s important to point out that Self has been nothing but complimentary of Martin’s effort and desire to do the right things since he first arrived.

Self doubled down on that stance following Wednesday’s victory.

“Remy’s been great,” Self said. “He’s got a great personality. He’s not defiant. He's coachable.”

From there, things got interesting, with Self qualifying the “coachable” comment by saying that it only extends to a certain point.

“He’ll listen to what you say and then sometimes it kind of goes in this ear and exits a different ear,” Self said. “Because he’s used to doing things his way. That’s not all bad. He’s stubborn, which is an attractive quality most of the time.”

The most important part of the whole equation is that very little of what Martin does on the floor ever seems scripted or overly thought out. He rides the wave of emotion more than almost any Kansas player I can remember in recent years, and he leads with things like passion, heart, fire and flash.

“It looks like he may not be doing (what you want at times),” Self explained. “But he can go get two points that you can't coach.”

That can lead to problems and breakdowns. But it can also lead to some unprecedented highlights and incredible energy, both of which benefit KU a great deal.

In the same way that Martin understands what and why Self is doing when coaching him, Self seems to understand that Martin has to be afforded a certain level of freedom to be fully effective.

Finding that sweet spot, where both are happy and operating on cruise control, will be one of the biggest keys to the 2021-22 season.

Self said the two have talked a little about that during Martin's first few months with the program, with most of those conversations being fairly one-sided.

“I wouldn’t say a lot of meetings or talks,” Self said. “We’ve had a lot of me talking to him about what we like and expect. You guys can see it. If he can tighten up a couple things, he could be a really nice guard, without question.”

Whether it’s for his own benefit, the good of the team or because he still wants to win a national championship before his college career is over — or all three — Martin appears to be fully committed to giving everything he can to Kansas and this team as their journey together begins.

Why else would a guy concern himself with plays that weren’t made during an exhibition victory that was never in doubt?

“I saw (teammate Ochai Agbaji) in the corner one time and I just let him know, ‘I see you,’” Martin recalled of a time when he drove to the rim for a layup instead of kicking to the corner. “Against Michigan State, that layup of mine might not be there, so I just let him know that different situations in different moments require me to do different things.”

“We all want to win,” he added. “And we all want to make the best out of this whole experience. So that, ultimately, is the number one goal.”

Martin praised his teammates, the progress of the squad in general, the coaching staff for “getting me right,” and the Kansas basketball culture and environment.

“It’s unbelievable, man,” he said Wednesday night. “I really do love this place. And being on this side is something that I’m not taking for granted and I’m super-grateful for.”

Sometimes, when you pair that appreciation with the joy with which he plays, things happen that haven't always happened at Kansas. Tongues come out mid-drive. Fists fly in the air. Roars of emotion follow every big moment, but Martin or one of his teammates.

“I’m fired up to be here," he said. "But I also just love the game itself and I love playing. That’s just who I am. Being my first game (in front of the) fans, I wanted to make sure I give them a glimpse of who I am and what they may see for the rest of the year.”

It Martin’s style of fun can coexist with a Self's love of player efficiency, this KU team and its fans will find that the time is always right for Martin to do his thing. And the Jayhawks will benefit a great deal when he does.

Looking a lot less likely, that's for sure. I'll prepare myself to chalk that one up as an L.

I do think there will be games where that will happen though. Maybe not at game point, but if he's able to become a facilitator, too, he and this team could be incredibly tough to stop.

They are pretty young, not as bulky as usual this year, but super LONG at every position.