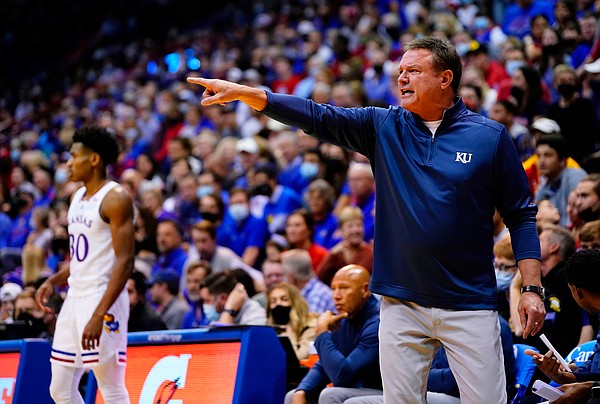 Kissimmee, Fla. — Kansas basketball coach Bill Self drew a comparison between this week’s ESPN Events Invitational and the NCAA Tournament when talking about his preparation for the eight-team tourney.

With that pre-scout already done on the four teams KU could face on Sunday, Self is confident that there will be enough time to put together a quality game plan for Sunday’s opponent no matter who it is or what’s on the line.

“That’s good that you’ll be prepared, but we have that day off in there (on Saturday),” he said. “So the staff will have them scouted, but then that gives me an extra 48 hours or 24 hours that you normally don’t have in a three-day tournament to scout whoever we’re playing that last day, regardless of what we’re playing for.”

Self said this week that North Texas would provide Kansas with enough of a challenge to make that the only game worth worrying about up to this point. And he noted that the Mean Green operating out of the spotlight of college basketball could benefit KU’s opponent in the opener.

“It’s harder sometimes to scout teams that you don’t see play on TV near as much,” he said. “If you watch us or Duke or another Big 12 school, you’re familiar with the personnel so you kind of have an understanding.”

To that end, Self said he liked the Orlando field because it featured quality teams one through eight. They might not all have “headliner” status like the blue bloods of the college basketball world.

But Self said their current spots in the national rankings made this an underrated field.

Of the seven other teams in this week’s tournament, only Alabama (No. 10) is ranked in the current AP Top 25. Drake is also among those teams receiving votes.

Regardless of which teams are ranked where, the Jayhawks themselves know that anything can happen in any given game in events like this. And their emphasis will be on executing what they want to do to the best of their ability.

“Just take it one game at a time and focus on the task at hand,” super-senior Jalen Coleman-Lands said before the team left Lawrence. “I know that’s going to be different, depending on the (opponent), but keeping our core values and playing how we know we’re capable of playing (will be the key).”