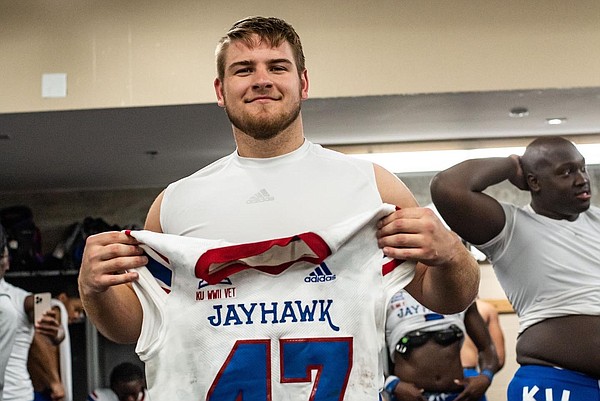 Kansas tight end Jared Casey holds up his No. 47 jersey in the visitors locker room after making the game-winning catch on a two-point conversion at Texas, on Nov. 13, 2021.

Entering last Saturday's final walk-through for the KU-Texas game, Kansas football walk-on Jared Casey had no idea that his life would suddenly be so busy in the coming days.

But there he was, after becoming a star following his game-winning, 2-point conversion catch, making commercials, doing all kinds of media sessions and still waiting for the reality of it all to sink in.

Wednesday, at KU's regularly scheduled player availability session, Casey talked about the whirlwind few days and his first dabbling with acting. He said he never was even in any kind of school play growing up and noted that, because his acting chops were a little raw, the whole experience of making a commercial for NIL partner Applebee's took a long time.

Here, in case you haven't seen it, is a look at Casey's Applebee's commercial, which was filmed in Lawrence earlier this week.

None by Hannah King

KU football folk hero Jared Casey talks about his catch, his NIL deals & the aftermath of all of it by KUsports.com

I thought he did very well in that commercial. His acting was really good.

A natural unless it took 30 takes to get it right. Fun and memorable, but the Jayhawks need to continue building on the one Big 12 win at TCU. Rock Chalk.