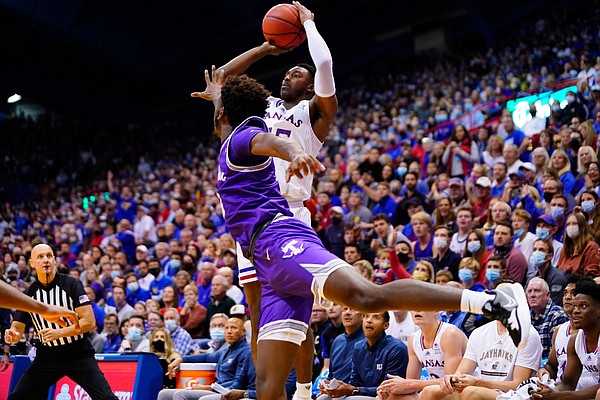 Kansas guard Jalen Coleman-Lands (55) puts up a three after saving an out-of-bounds ball and catching a pass on the wing during the second half on Friday, Nov. 12, 2021 at Allen Fieldhouse. by Nick Krug

As the Kansas men’s basketball team sits on the brink of getting one Jalen back from suspension in the coming days, head coach Bill Self delivered some serious praise for the other Jalen on the roster on Wednesday.

In the team’s first two regular season games without sophomore Jalen Wilson, super-senior Jalen Coleman-Lands has averaged 7.5 points in 11 minutes per game while picking up some of the slack created by Wilson’s absence.

All of that came while Coleman-Lands battled a toe injury, which Self said he reaggravated during Tuesday’s practice.

Self revealed Wednesday that Coleman-Lands’ injury, which was believed to be improving last week, is a cracked bone in one of his big toes. It’s not an injury that keeps him on the sideline, but Self said the opportunity to bother it exists pretty much every day.

“In basketball, there’s a chance somebody can step on your toe at any time,” Self said. “But he’s been good.”

So good, in fact, that Self recently pulled him aside to deliver positive feedback and a message of encouragement in hopes of inspiring Coleman-Lands to keep pushing through the discomfort as he waits for the toe to heal.

“I said, ‘I know I’m on your butt, but I promise you I notice that you haven’t complained one time, you don’t mope around, we know you’re not 100% — you’re probably at 80% — you get treatment all the time, you do everything you’re supposed to do,’” Self said. “And, to me, that’s a form of maturity and toughness.”

While Self felt good about picking the Iowa State transfer up with a few ‘atta boys,’ he also recognized that words can only do so much and that Coleman-Lands would probably be far happier to be playing at 100% again.

“I see it,” Self said of the veteran guard’s good attitude. “But it still hasn’t allowed him to be who he is yet.”

Despite the injury, Coleman-Lands has shown a willingness to bring maximum effort to the floor for all 21.5 minutes he has played. That has been particularly evident on the defensive end, where he slides and works to guard as hard as just about anybody on the roster.

On the offensive end, Coleman-Lands has hit 5 of the 9 shots he has attempted, including 3 of 6 from 3-point range, which was largely considered to be his specialty when he arrived at Kansas.

A career 37.1% shooter from 3-point range, Coleman-Lands shot 39.5% from 3-point land at Iowa State last season and is off to a good start at KU. In last week’s win over Tarleton State, he hit all four shots he attempted, including a 2-for-2 clip from 3-point range.

The third-ranked Jayhawks (2-0) return to action at 7 p.m. tonight versus Stony Brook at Allen Fieldhouse.

Bill Self: People will be ‘pleasantly surprised’ with how different KU looks when Jalen Wilson plays by KUsports.com

Freshman KJ Adams on fitting in and contributing for KU basketball by KUsports.com