Kansas QB Jalon Daniels earned latest opportunity long before last Saturday's win at Texas; Now, what will he do with it? 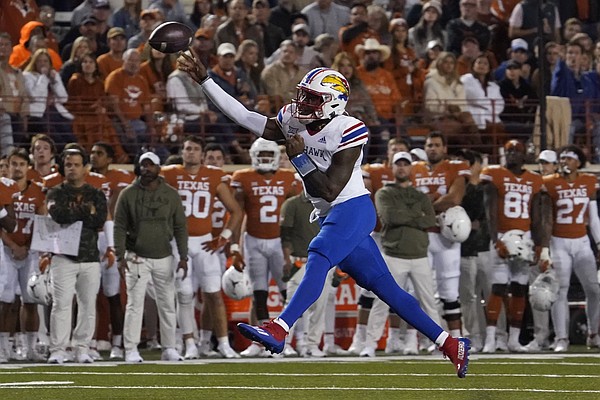 A Kansas football season that began with uncertainty at the quarterback position is on the brink of ending with at least a little clarity there.

That’s all thanks to the way both head coach Lance Leipold and sophomore quarterback Jalon Daniels handled things during the past four months.

Their poise and commitment to the process came to the forefront on Tuesday, when Leipold announced that he had left the decision whether to play or not in the final two games of the season in the hands of Daniels and his family.

Bravo, coach. After watching what Daniels did against Texas, that was the only way to move forward.

From Daniels’ perspective, choosing to play rather than aiming to preserve his redshirt was also a no-brainer decision.

Now we get to see what the 19-year-old QB from California can do with a little bit of confidence, both in himself and from his head coach and teammates.

Daniels earned the opportunity to make this decision long before leading the Jayhawks to victory over Texas, though. From Day 1 of this summer’s quarterback race, Daniels put the program first.

He said throughout the summer that, as much as he wanted to win the job, he wanted his team to win more than anything. That sentiment came to a head at media day, on Aug. 17, when Daniels was asked about battling for the job and responded by saying that if the right move was for KU to go with someone else, he didn’t want to win it.

He simply wanted the best player lining up at the game’s most important position.

As it turns out, that may be him.

Junior transfer Jason Bean won the job initially and had both good moments and bad. An injury in the Kansas State game, however, opened the door for Daniels, and rather than stepping through it with a chip on his shoulder, he sprinted through it with the enthusiasm of a kid running to the front of the line for his favorite ride at Disneyland.

We saw that same vibe from Daniels as a true freshman. But he’s a different quarterback today than he was back then.

Daniels isn’t perfect by any means. But it’s clear that the time he spent serving as the team’s third-string QB with plans to redshirt was put to good used.

He got better. He gained confidence. He improved his accuracy. He gained a different perspective. All of those were critical for a young QB who started way sooner than he ever should’ve during the 2020 season and did a lot of what you’d expect an 18-year-old, true-freshman QB to do while playing college football for the first time.

He flashed in spots and showed off his big arm at times, but also was chewed up and spit out by the biggest and best the Big 12 had to offer.

Now, he gets what amounts to a redo. It’s also an audition of sorts for his immediate KU future.

Perform as well as he did in the next two games — Saturday at TCU and home vs. West Virginia on Nov. 27 — and he might just cement himself as the Jayhawks’ quarterback of the future.

Time will tell on that, of course. But thanks to a solid and sound approach by all parties involved, we now get to find out.

And, for most still paying attention, actual intrigue around Kansas football in the month of November is as rare as beating Texas in Austin once was.

No doubt he will choose to play. This is great news for the last two games. With him playing, we have a chance for a win or two. That would be great for the mindset of our team as well s for recruits. And he will still have three years left to play.

The other good news is this, assuming Bean doesn’t transfer, we have two pretty talented guys, with experience, returning next season.

If Daniels does win the job, then I could still see Bean being used in special packages that take advantage and f his speed.

I know it won't happen, but I still wish he would red-shirt. I'd rather have him for 3 years than 2 years and I realize you play to win, but it isn't like Bean hasn't been good this year. He will hold his own against TCU and WVU and either QB gives us a chance to win.

However, will I be sad if he plays not one bit and if we could get both of the games at the end, and claw out of the cellar (even close to 8 or 9th) it would be a much improved team.

What would even be better is if ISU and OSU beat OU and TX loses a couple more...than you could see the Big XII giving up the 4th and 10th place team in the conference.

In another article about Jalen, it states he is eligible to take advantage of the NCAA’s blanket COVID waiver, and can come back as a virtual sophomore next season. That means he can still play three full years after this one. Plus, he could even redshirt and stay four more years, theoretically. Pretty unlikely, though.

Jeff - Last year was a CV-freebie so Jalon has at least 3 years remaining.

What is less certain is 70% completions and 4 TOs. All were necessary for a W. Jalon hadn’t been completing that many passes even a week ago.

The most important thing is continued improvement. It is fun to dream of Todd and Kerry v.2.0

After checking the data, let’s put an asterisk by my previous comments. Jalon was 60% or less in really limited pass attempts in the first 2 games this season but was 68% in an emergency role against the purple kitties. That’s more encouraging.

If we are competitive and/or win either of last two games, this will look like the right decision. If we get blown out, it will be regretted. Simple as that.