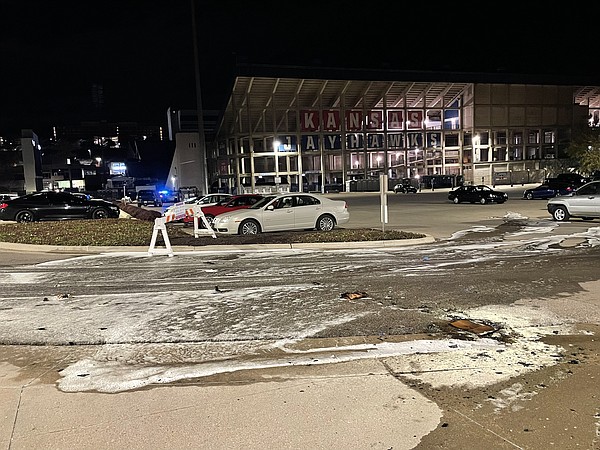 The remnants of a couch fire rest in the David Booth Kansas Memorial Stadium parking lot on Saturday, Nov. 13, 2021. by Matt Tait

According to KUPD officers on the scene, efforts were made by some fans who wanted to storm the field and go after the goalposts. But by night’s end, the goalposts remained standing and the celebration was largely incident free.

A crowd of between 100-200 KU fans celebrated the victory near the southeast corner of the stadium, chanting and cheering the Jayhawks’ first Big 12 road victory in 13 years.

In the background, music was blaring from house parties along Mississippi Street and KU fans were cheering and honking their horns around campus. A few fireworks even soared into the sky.

Saturday's win was not just some run-of-the-mill victory for Lance Leipold's Jayhawks. It snapped a 56-game road Big 12 losing streak and a stretch of 18 consecutive conference losses. The Jayhawks, who were a 31-point underdog, won for the first time in 101 games as an underdog of 24 points or more. And the 57 points were the most in a road game in KU history.

Clearly, there was plenty to celebrate, not the least of which was the fact that this win was the second for Kansas in its past five games against UT. In their last trip to Austin, in 2019, the Jayhawks narrowly missed out on what would have been a third win in five tries.

Saturday's celebration around the stadium lasted less than an hour and included a couch fire near the southeast corner of the stadium’s east parking lot. A fire truck from the Lawrence-Douglas Country Fire Medical Department was dispatched to put out the fire and the area was mostly quiet by 11:40 p.m.

Conversations between KUPD officers on hand indicated that the celebration included “mostly good enthusiasm” and that “no one got hurt that we’re aware of.”

One officer on the scene told the Journal-World that she encouraged the students who were celebrating to send and post their videos to members of the football team to show they were there supporting them.

The victory improved KU to 2-8 on the season and dealt the Longhorns their fifth consecutive loss.

Next up, KU will play at TCU at 3 p.m. next Saturday before closing out the season at home against West Virginia on Nov. 27.

They wouldn’t let the students into the stadium, so they started a fire…. pic.twitter.com/hXFMmbIIvH 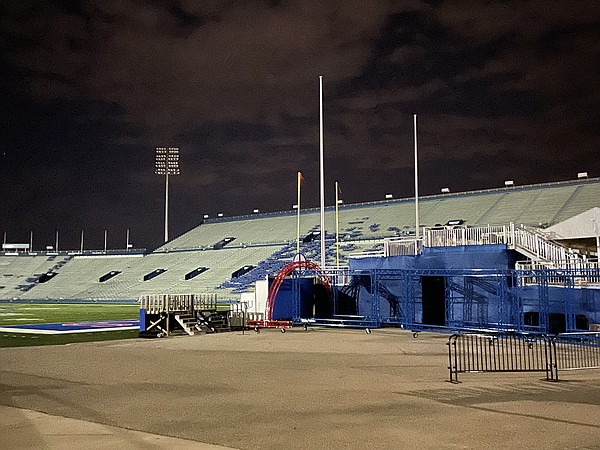 Efforts were made to storm the field and tear down the goal posts at David Booth Kansas Memorial Stadium on Saturday, Nov. 13, 2021, but, by night's end, the goal posts were still standing. by Matt Tait

Sorry. It's just not a big win if the goalposts aren't in the pond.

Seriously...couch fire? We've gone 100% full kentucky mode here. For a program with a highly prestigious bball program, we sure act like we've never won anything.

Also, when was the last time there was a couch fire for a bball win?

I laughed at the couch fire. Think they’re traditional for championships. Not sure if it happened in ‘08 or ‘88. Did see one at another uni during grad school. Glad the officers and everyone had a good time.

Now we need to build on the W through the end of the season into recruiting and the off-season.

Someone tweeted to protect the goalposts near the end of the game. Thought it was sarcasm. Laughing at being wrong.

Still wondering when someone from the athletic department is going to consult either with the school of engineering or a consultant to design and build goalposts that can’t be torn down. It’s been done elsewhere. Or they can keep blaming the students.

Within three years, I believe that the goalpost tradition will be over. Because we will expect to contend and win.