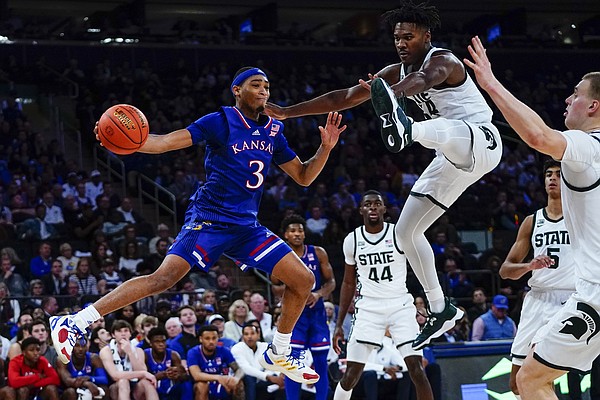 New York — Kansas men’s basketball coach Bill Self has never put too much stock into what happens at the Champions Classic — win or lose.

It’s early in the season. Mistakes are inevitable. And most of the Kansas, Duke, Kentucky and Michigan State teams that have played there in the past 11 years have transformed into something drastically different — both good and bad — as the seasons have progressed.

So, yeah; Self was happy his team won on Tuesday night, knocking off a tough Michigan State team 87-74, behind a career-high 29 points from senior guard Ochai Agbaji. But the rest of the week has been about Tarleton State (Friday's opponent) and getting ready for Stony Brook (Nov. 18) and the upcoming Orlando tournament far more than what went down at Madison Square Garden on the first night of the season.

“I don’t think this game means a ton in February,” Self said after Tuesday’s victory. “It’s too early in the season. I do think it’s one of those games that (when) you look back and start adding good and bad, this is definitely a mark in the good space for us.”

It’s Self’s job to make sure they do that, and he was already pushing that message on Tuesday night.

“We can’t be happy with winning,” he said. “We’ve got to get better. I don’t know my team that well yet, but any time you play Michigan State or leave this Classic with a win, it’s a very positive thing.”

The list of things that need to be addressed is long.

Putting the pieces together and finding consistent flow and rhythm on both ends only figures to get more complicated three games from now, when returning starter Jalen Wilson is back from his four-game suspension.

Self said Tuesday night that he cannot foresee playing 10 or 11 guys on a regular basis throughout the season. So, distributing the minutes and figuring out how to give everyone on this roster what they deserve likely comes down to who earns it — day by day and week by week — and a few situational coaching decisions.

Beyond that, Self does not seem to think that playing super-small, with Dajuan Harris Jr. and Remy Martin on the floor together for large chunks of time, is a sustainable way to compete at the highest level.

And then there’s the ongoing effort of figuring out just how Martin and his game fit into the Kansas basketball philosophy. Other individuals also have areas they can — and need to — improve in, as well. Most notably, senior big man David McCormack needs to show that his slow start in the season opener will not translate into a slow start to the season like it did a year ago.

All of those issues and the others that will show up on film, when the Jayhawks rewatch this one, are easier to stomach because of the outcome.

Said Self of the annual season opener: “It’s not a game that hurts you if you lose, but it can help you if you win.”

From a confidence and good vibe perspective, that’s exactly what the 1-0 Jayhawks got.

“It was extremely fun,” Martin said after the win. “And it means a lot. We know it’s a long season and we’ve got a lot of games left, but Michigan State was a great first matchup.”

i like the makeup of this team and how the current players fit . I took a peek at 4 players that transferred out Enaruna ,Thompson,Muscadin, and Grant-Foster 2 players are starters on their current teams Enaruna at Iowa State and Grant -Foster at Depaul . Gethro Muscadin as a non-starter was most productive per minutes played while Enaruna was in the Meh category .

Here is each players statline after 1 game

1 game does not make a season but what we lost was worth losing because we gained Remy Martin Coleman-Lands Pettiford Clements Yosefu and Adams Had those guys not left we wouldnt have had the roster spots open .Addition by subtraction . I will admit Muscadin is intriguing and didnt get time here and if he would have stayed no guarantee Self would have played him but we will never know . If Clemence develops as good player behind D Mac losing Muscadin wont be a big deal

But again I like the team we have now , but wishing last years guys that left all the best