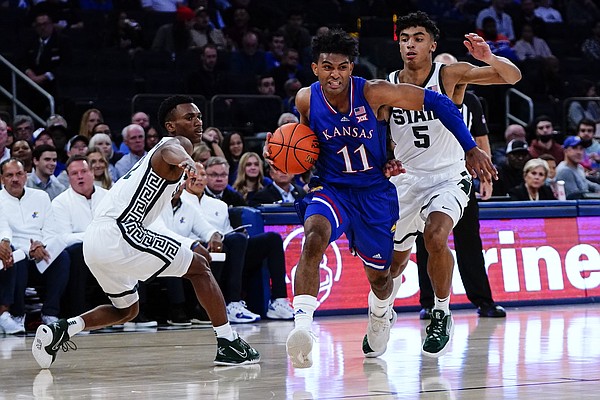 New York — Kansas senior Remy Martin’s official KU debut will be remembered for three things — a slow first half, a strong second half and a victory.

And that’s just the way Martin likes it.

Surrounded by around a dozen members of the national media, all wanting to hear for themselves what the free-spirited Martin expects from his final season of college basketball, the first-year Jayhawk left nothing to the imagination in repeating a refrain that he has uttered often since he committed to KU.

On Tuesday, during the Jayhawks’ 87-74, season-opening victory over Michigan State at the Champions Classic inside Madison Square Garden, Martin had moments where he contributed to the victory.

He also had moments where he sat on the bench or deferred on the court, and he was fine with all of the roles he played in the opener because of the outcome.

If Martin and the Jayhawks are going to win at the level they all want to, Martin is going to be a big part of it. But he showed on Tuesday night that he is mature enough to pick his spots — when to put the pedal down and when to pull back, when to attack and when to facilitate.

The funny thing about that dichotomy is that it really requires very little thinking by Martin.

“I just go out there and play my game,” he said after Tuesday’s victory. “These guys want me to play how I play, and I love it here. I love the Kansas culture and I’ve bought in and I just want to win.”

It does not take long to see that Martin is driven, in almost everything he does, by pure emotion.

Before Tuesday’s game, while the nine other players starting for their respective teams gathered near mid-court for the opening tip, Martin was under the south basket, leaning up against the support padding while talking to himself to get into the right frame of mind for the game to go live.

He lingered there so long that senior standout Ochai Agbaji, who led all scorers with 29 points in the Kansas victory, could be seen looking around, almost as if he was searching for Martin or whoever was supposed to be KU’s fifth player on the floor.

It’s those moments — Remy being Remy — that will become more familiar to his new teammates and the KU coaches as the season progresses. But it’s not as if there’s some sort of timeline that indicates when it’s all going to click.

Because he’ll be at Kansas for just one year, and because he’s still so new to everyone at KU, the work to understand who Martin is, how he plays and what he does best and why likely will be an ongoing effort that lasts from the season’s beginning to end.

All parties involved can accept that because they all know it going into it. But Kansas coach Bill Self is hoping that Martin, over time, will fully examine what his new coaches are asking him to do and what his new team needs him to be.

“I haven’t quite figured Remy out,” Self said after Tuesday’s win. “And I don’t mean that in a negative way. He’s a guy that gives energy and plays with personality. So, he’s going to be a big bonus for us in that regard. But if he can get 15 a game the way we play, it’s going to be a huge, huge bonus for us.”

The key to that will be Martin getting his within the Kansas system. Agbaji did exactly that on Tuesday night, which made his 29 points seem a little on the quiet side. And Martin did that in the second half, when Self elected to spread the floor more to give him space and lanes to attack.

The result was 15 points on nine shots in 16 second-half minutes, with Martin playing with more aggression and purpose than he did in the first half, when he did not attempt a single shot.

Again, the two halves showed that the KU guard has a clear — albeit early — understanding of what’s possible for him at Kansas.

During his days at Arizona State, there was no decision to be made. It was go, go, go and then go some more. Both Self and Martin referenced that in Tuesday’s postgame press conference, with Martin explaining the way he thinks now and Self emphasizing that even better days are ahead for Martin as long as his mindset remains in the right place.

“If Ochai has a hot hand, I’m going to get him the ball,” Martin said. “If Dave (McCormack) is sealing, give it to him and get out the way. If those guys can do those things, my job, as a point guard, is to win basketball games.”

1st half: Martin played coach's way. 2nd half: Martin played to win - with his style. That is to score a bunch. We need this guy to play to his best known for: unpredictable & score. Agbaji can't do it alone - 80 something points - thanks to Remy, too. Forget about pounding it to the big guy/DMac. He's too inconsistent, wouldn't say he didn't improve. I'd say, free Martin up, coach. That's how he can be most effective.

I have no issue with feeding DMac. Even if he is a bit inconsistent and awkward to the bucket he draws attention and it just opens things up for Braun and Martin. Plus, Mac is only getting better.

DMac needs to finish he scored 10 points on 11 shots and a couple of those points were from free throws he missed mostly bunnies only 2 rebounds doesnt exactly blow my socks off given hes that close to the rim .

i looked the Kentucky basketball site . They are aware that we are 3 games behind them that they are keeping a running total of victories by both schools