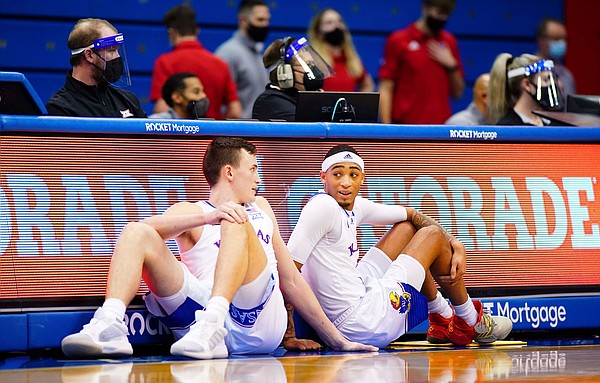 Kansas forward Mitch Lightfoot (44) and Kansas guard Dajuan Harris (3) have a chat while waiting to check in during the second half on Thursday, Jan. 28, 2021 at Allen Fieldhouse. by Nick Krug

Kansas men’s basketball coach Bill Self has not yet said who will be in the Jayhawks’ starting lineup when the regular season opens on Nov. 9 against Michigan State in New York City or on Wednesday in the exhibition game against Emporia State.

But in the wake of Sunday morning’s Jalen Wilson arrest, it seems like a safe bet that Wilson will not be in it.

In fact, if the past is any indicator of what’s to come, Wilson may not be in uniform for those game and perhaps several more after that.

In response to the redshirt sophomore from Denton, Texas being arrested on suspicion of DUI early Sunday morning, Self said in a statement Sunday evening that he was still gathering information and that “potential consequences” would be determined once the KU program had all of the details.

What those consequences will be is anybody’s guess. But in 2009, then-KU guard Brady Morningstar was arrested on suspicion of DUI in early October and he wound up missing the entire first semester because of a team suspension handed down by Self.

Morningstar was 23 at the time of his incident. Wilson will turn 21 on Thursday.

The semester-long suspension in ’09 cost Morningstar nine games. His first appearance of the 2009-10 season came in a Dec. 19 victory over Michigan, when he logged 22 minutes in his season debut. During his suspension, Morningstar did not play or travel with the team. He was allowed to practice and participate in all other team activities. He finished the season averaging 21.4 minutes per game in 27 appearances.

According to KU’s academic calendar, the 2021 fall semester is slated to end on Dec. 17. If Wilson were to receive a suspension similar to the one Morningstar received 12 years ago, he, too, would miss nine games.

All of this is speculative at this point, of course. And Self likely will update Wilson’s status in the coming days.

However, assuming Wilson misses time — whether it’s a game, a semester or anything in between — the Jayhawks will enter the season with three returning starters instead of four.

Based on recent comments and the makeup of the roster, it seems like a safe bet that seniors Ochai Agbaji, Remy Martin and David McCormack, along with junior Christian Braun, are in line to start for the Jayhawks this season.

If Wilson was going to be the fifth starter, that spot could now be up for grabs, even if just temporarily.

With that in mind, here’s a look at the top candidates who could fill out KU’s starting five if Wilson is not available.

• Sophomore guard Dajuan Harris - Arguably the one player who has received the most consistent praise from the coaching staff from April through today, Harris would give the Jayhawks a pass-first point guard on the floor and another impact defender. That would open things up for Remy Martin to be more of a scoring point guard at the 2. Harris’ small stature could be a concern here, but Self said recently that he likes the idea of playing Harris and Martin together. This gives him the opportunity to do just that from the opening whistle.

• Sophomore guard Joseph Yesufu - Another small and dynamic guard, Yesufu would bring more scoring punch to the lineup and would fit in just fine if the Jayhawks want to play fast on both ends of the floor. He started seven of 31 games last season at Drake and has been with the team since June.

• Freshman guard KJ Adams - Adams is an intriguing option because of his size and skill set. Like Wilson, he’s big enough to get on the glass and do some damage down low, but he also has guard-type skills and his athleticism allows him to play on the perimeter, both as a shooter and a defender. He is still just a freshman, so inexperience could be the biggest factor here. But Adams’ coaches and teammates have had plenty of good things to say about him during the first couple of months of practice.

• Super-senior forward Cam Martin – At Big 12 media day in mid-October, Self said that he was less likely to play Martin and McCormack together than once thought. Martin is likely to enter the season as a McCormack back-up and therefore, plugging him into the starting five, though helpful in terms of size, may not be the best thing for the rotation overall.

• Super-senior guard Jalen Coleman-Lands - There’s a lot to like about Coleman-Lands’ game. He’s a pure shooter. He has good size and athleticism. And, at age 25, he’s mature and has played a lot of college basketball. From the sound of things, though, his defense is not quite where the coaching staff wants it to be yet. Could it get there before the opener? Perhaps. But if it doesn’t, that would likely keep him from sliding in as a starter.

• Super-senior forward Mitch Lightfoot – You’ve all seen veterans who Self trusts and can rely on get extended opportunities early in a season. Could the sixth-year Lightfoot be an option because of that? In addition to his experience and willingness to do whatever, whenever, Lightfoot also plays the right position here and would be easy to insert at the 4. It still seems like a bit of a longshot, given the other options available to Self. But the potential for Wilson to be out of action for a while certainly increases Mitch’s chances at minutes early on even if he doesn’t start.

With all of that said, if Wilson does miss any amount of time because of his recent run-in with the law, here’s my projected starting lineup for the Jayhawks on Nov. 9 against Michigan State:

We’ll find out soon enough whether a new starting five is needed and what it might look like. Before the regular-season opener, though, we’ll get a sneak peek at what Self and company might be thinking, when the Jayhawks play host to Emporia State at 7 p.m. Wednesday in their only exhibition game of the season.

The Jayhawks are going to get pounded on the glass. Thanks, Wilson!

not piling on this kid--everyone makes mistakes--i just dont understand with Uber and Lyft how people still get DUIs--not that it was an excuse before not to take a cab but now it's at the touch of your finger tips it doesn't make sense to me. why are driving on a night out to start?

obv most importantly no one was hurt hopefully he'll learn and move on.

The big difference being that Morningstar was legally able to drink and Wilson is still underage. Bonehead move.

Rae - Part of what we know is that alcohol impairs, whether that be operative in driving or mental in deciding you’re not impaired. This will help reinforce the message about making decisions in advance.

Interesting to learn about JCL (my first thought) being a little slower on the D learning curve. I thought I read when he first announced his transfer that D was a strength but it’s a different animal under Self. The great video series with Self from the CV summer gave a glimpse into some of the subtleties that most of us never realize.

It would seem that part of the purpose in Remy coming to KU was the opportunity to be more of a lead guard, so starting him alongside Harris seems counterproductive in the long run.

I think David showed (and Coach spoke of) him needing to do more than just preventing his man from getting the rebound (which led to Jalen getting more).

A smaller lineup seems more plausible in the exhibition against a smaller team. Not sure about MSUs lineup or other teams to start the year.

trust me i know--i've made uncountable regrettable decisions under impairment. At this stage i am just surprised people even start the night with their car--i.e. use an uber at the get go and not just to get home

Should have started with, “As always, great article Matt.”

Our bench is so thin. If he gets suspended, what are we down to 17 players then? LOL

Probation and evaluations costs and

Vehicle can be impounded for 1 year

Rodney - I think you meant 'driving' privileges will be suspended for 30 days. Not sure what effect a conviction has on your drinking privileges. Hopefully they're suspended, too. LOL

you are right Nick. lol

I would prefer we go with a bigger line up. We need more bigs out there!

I know Coleman-Lands is old, but I believe he's only 25.

Good call. Typo. It's fixed now. He turned 25 on July 15 and I believe he and Mitch Lightfoot are a day apart. Wild stuff. Thanks!

Jalen Wilson is an important player on this team, but unlike last year when we were lacking in talent, toughness, and hunger, this year we have plenty of talent, and if Remy Martin's attitude rubs off on the rest of the team, they should be tough and hungry. I think we'll be just fine without Jalen for however long Coach Self decides to suspend him.

And frankly, he should be suspended for the rest of the fall semester just like Brady Morningstar. As Kyle pointed out above, Brady was at least legal drinking age when he got popped for a DUI, but Jalen is underage. So his punishment should be as stiff as Brady's punishment was.