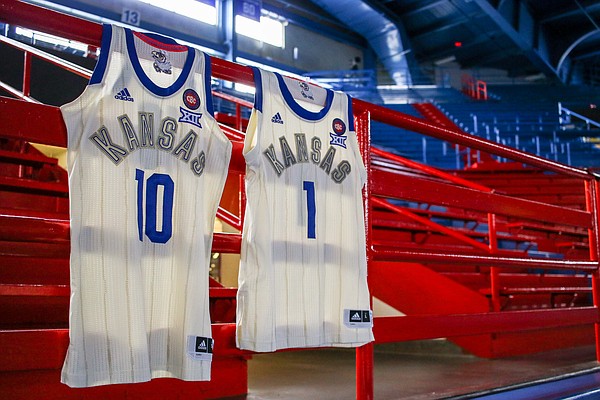 The Kansas men’s basketball program officially released its updated roster this week, with seven new names and eight familiar ones on it.

Ochai Agbaji and Jalen Wilson, KU’s potential returners who are testing their NBA draft stock, both are listed on the updated roster, with the words “Has declared for the NBA Draft but is eligible to return” written in the column labeled class.

Both players have until July to decide their futures, so it’s not likely that the distinction will be changing any time soon.

This year’s draft is slated for July 29 — roughly a month later than normal — and the draft combine has also been moved back from May to June.

Draft hopefuls invited to participate in this year’s combine will do so from June 21-27. The exact details of how the combine will run, in light of continued COVID-19 protocols, remains to be determined and it’s possible that this year’s format will be a hybrid of the virtual experience from 2020 and the normal, in-person workouts and interviews of the past.

Also of note on the updated KU men’s hoops roster are the jersey numbers claimed by the seven newcomers.

Here’s a quick look at what each new Jayhawk will wear during the 2020-21 season:

The former Louisville commitment who signed with the Jayhawks in April becomes the latest Jayhawk to wear No. 0, directly following former National Player of the Year Frank Mason III and 2020 Naismith Award Defensive Player of the Year Marcus Garrett. Thomas Robinson and Drew Gooden are the only other Jayhawks who have ever worn No. 0. Talk about a big tank top to fill.

The former Drake standout will be wearing the same number he wore while playing for the Bulldogs and for at least part of his prep career at Bolingbrook High outside of Chicago. Wayne Selden Jr. and Dedric Lawson are the two most recent Jayhawks to wear No. 1.

Cuffe reclassified to arrive at Kansas a year earlier than expected and snatches the number that most KU fans probably associate with Keith Langford. Quentin Grimes (2018-19), Evan Manning (2013-16) and Jeff Withey (2010-13) also recently donned No. 5, along with a couple of old school Jayhawks in Howard Engleman and Charlie Hoag and all-time fan favorite walk-on Terry Nooner, who is now the associate head coach with the Kansas women's basketball program.

Clemence, a stretch 4 type of player with the athleticism and skills to play both inside and out, is wearing the number he wore throughout his career at Sunrise. Clemence will be the first scholarship player to wear No. 21 since Joel Embiid during the 2013-14 season. Walk-on Clay Young wore 21 from 2016-18.

Although you don’t always think about a ton of Jayhawks wearing the number that Michael Jordan made famous, there have been a few sensational ones. Wayne Simien and Ben McLemore are the two biggest of the Bill Self era.

Adams wore the number in high school and he will become the 16th player in KU history to wear No. 24, making it the program’s second most popular roster number of all-time behind No. 22.

The Division II transfer who shot 45% from 3-point range during his senior season at MSSU opts for the Scot Pollard/Jamari Traylor number, which could make all those 3-point shots he hoists look a little strange.

According to the updated roster, all of KU's returning players, including Agbaji and Wilson if they elect to come back for the 2021-22 season, are slated to wear the same numbers they wore last season — Christian Braun (2), Dajuan Harris (3), Jalen Wilson (10), Chris Teahan (12), Michael Jankovich (20), Ochai Agbaji (30), David McCormack (33) and Mitch Lightfoot (44).

Matt, is there a reason there is no link to the roster on kusports?

If my memory isn't failing, didn't one of the Morris twins wear 21? And the other wore 22?

That's correct. But that was also before Embiid and Clay Young. Could've mentioned it. Just didn't want to start listing every player to wear every number with each one.

Matt, I used to be able to get a current roster (basketball and football) on kusports but they have not been available for a year or two. Is there a possibility of the rosters again being available here? thanks.