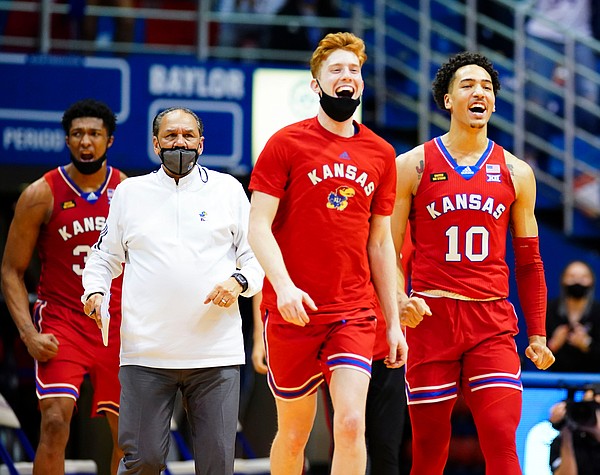 The Kansas bench empties to celebrate during a timeout in the second half on Saturday, Feb. 27, 2021 at Allen Fieldhouse. by Nick Krug

After weeks of grinding through the Big 12 Conference basketball schedule, 13th-ranked Kansas is ready to try something new.

And it’s likely that Thursday’s 7 p.m. regular season finale against UTEP at Allen Fieldhouse will provide the Jayhawks with both the opportunity to stay sharp and a small taste of the quick turnarounds and short prep times that dominate the month of March.

But those facts do not mean that Kansas coach Bill Self and his team are taking Thursday’s contest any less seriously.

While the rest of the Big 12’s programs are putting the finishing touches on their conference slates, the Jayhawks have had the advantage of spending the past few days catching their breaths.

Fresh off of last Saturday’s thrilling 71-58 win over No. 2 Baylor, Kansas (18-8 overall, 12-6 in Big 12 play) entered the week with 11 days between the end of the Big 12 season and its opening game in the Big 12 tournament. That’s why Self and company sought out UTEP, which also was looking for a game to play to stay sharp.

Adding Thursday’s non-conference matchup gave both programs a challenge to look forward to and focus on while also providing the opportunity to catch some rest.

Self said after the Baylor victory that he could envision a scenario where his team took Sunday and Monday off and still had time for two intense days of practice before facing UTEP.

After that, KU will get another opportunity to mix down time with prep time leading up to its opening game in the Big 12 tournament on March 11 against a yet-to-be-determined opponent.

“We should be fresh by the Big 12 tournament,” Self said.

Never did that look more advantageous than on Tuesday night, when No. 3 Baylor and No. 6 West Virginia waged an all-out battle in Morgantown, W.Va., that went to overtime, with the Bears winning 94-89 to clinch the Big 12 regular season title.

Both of those teams still have two more games to play this week, with three of the four coming against ranked foes.

Like Kansas, they’ll get some time off between the end of the regular season and the start of the Big 12 tournament. But the schedule certainly seems to favor the Jayhawks more than any other team in the conference and they’re looking forward to mixing it up with UTEP on Thursday night.

“That’s something that can help us out a lot,” senior guard Marcus Garrett said. “It’ll give us (some) preparation so we don’t just go into the tournament with no (recent) games.”

Added Self: “It came down to 11 days is a long ways to go without playing games this time of year. I know people have done it, with COVID and pauses and things like that. But if you don't have to do it why do you do it? Hopefully it'll help prep us and keep us sharp going into the postseason.”

Basketball Friends | What We Learned From KU's Win Over Baylor by KUsports.com