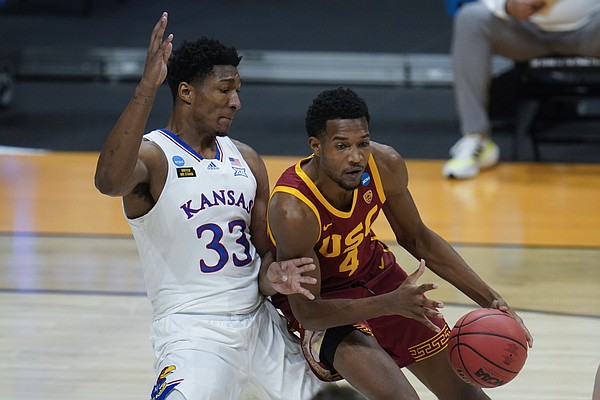 Kansas forward David McCormack (33) guards USC forward Evan Mobley (4) during the first half of a men's college basketball game in the second round of the NCAA tournament at Hinkle Fieldhouse in Indianapolis, Monday, March 22, 2021. (AP Photo/Paul Sancya) by Associated Press

It’s been nearly a week since the 21 Kansas men’s basketball team was knocked out of the 2021 NCAA Tournament and the Elite Eight is now set.

With two double-digit seeds still remaining and eight coaches who have never won a national title, the next three rounds figure to be as wild and crazy as the first three.

We were this close to seeing Oral Roberts make history as the first 15 seed to ever reach the Elite Eight. And, somehow, it’s three Pac-12 schools — not Big 12 or Big Ten — that make up nearly 50% of the schools still in the hunt for this year’s national title.

I know plenty of Kansas fans have already written off this year’s tournament and will not be interested in watching the rest unfold. But for those of you who are still paying attention, here’s a quick look at the Kansas connections — direct or deep reaches — to all eight of the teams still playing.

The first two tickets to next weekend’s Final Four in Indianapolis will be handed out on Monday night, with the two other teams joining them on Tuesday.

1 - Gonzaga – The obvious tie is that the Zags beat the Jayhawks in the 2020-21 season opener, 102-90, to kickstart their quest for a perfect season. But let’s not forget that former KU walk-on Evan Manning, the son of KU legend Danny Manning, is on Mark Few’s staff and will be looking to do what he couldn’t while at Kansas by reaching the Final Four with the Zags.

6 - USC – You all know what happened, so we won’t restate the obvious. Quick question, though: Did seeing what the Mobley Brothers did to Oregon on Sunday night make last Monday’s KU loss in Indy any easier for you to swallow?

1 - Michigan – You’ve got to go to a couple of six degrees of separation type of connections for this one, but they’re there. First off, Michigan, you may remember, is the program that current KU starter Jalen Wilson initially committed to and almost picked again after reopening his recruitment following the departure of former Michigan coach John Beilein. Current Wolverines coach Juwan Howard recruited Wilson hard but he wound up choosing Kansas after viewing the situation as an opportunity at a do-over. Beyond that, Michigan’s roster includes former Wake Forest wing, Chaundee Brown, who KU temporarily recruited before then-Wake coach Danny Manning convinced him to join the Demon Deacons.

11 - UCLA – KU was supposed to play the Bruins in the Wooden Classic this season but wound up playing Gonzaga in Fort Myers, Fla., instead. Beyond that, there’s the obvious tie of KU recently passing UCLA for most consecutive regular season conference titles AND most consecutive weeks ranked in the Associated Press Top 25.

1 - Baylor – KU was one of just two teams to beat Baylor this season and the connections between these two Big 12 brothers are obvious. It’s hard to know exactly how the entire KU roster feels about it, but it seems likely that at least a couple of current Jayhawks are pulling for the Bears to win it all, even if for no other reason than to say they beat the champs. Gonzaga’s clearly the team to beat and Baylor has its hands full with the Razorbacks, but if they can get to next Monday night, they’ve got enough offense and defense to give the Zags a run for their money.

3 - Arkansas – This one goes back to former KU player turned coach Rex Walters, who spent a season (2018-19) working for Arkansas head coach Eric Musselman when Muss was at Nevada. The opportunity came right after Walters’ stint as an assistant coach with the Detroit Pistons and right before he hooked up with Manning at Wake Forest. And Walters will be happy to tell you at any time how much respect, admiration and appreciation he has for Musselman. Here’s another deep connection: Arkansas assistant coach David Patrick played for the Syracuse team that knocked off KU in the Elite Eight in 1996 in Denver en route to a spot in the national championship game.

12 - Oregon State – There’s not a whole lot here, which makes sense when you consider the distance between Lawrence and Corvallis, Ore., and the distance between these two programs of late, a fact that has kept them from even bumping into each other on the recruiting trail. Remember, this Oregon State squad entered the 2020-21 season picked to finish dead last in the Pac-12 Conference and wasn’t even in the tournament until winning the Pac-12 tourney. Having said that, I found one connection via a bit of a reach. Oregon State sophomore Rodrigue Andela hails from Cameroon, the same country that produced former KU big man and current NBA mad man Joel Embiid. No word on whether Andela has told any tales of killing a lion with his bare hands, but the hometown connection is there. Embiid is five years older than Andela, but both list Yaounde, Cameroon as their hometowns.

2 - Houston – Quentin Grimes, of course. But it goes deeper than that. Before we get there, though, it’s worth pointing out that the Grimes that has played at Houston these past two seasons — which has been spectacular — likely would never have shown up in Lawrence. It was clear in his first year at KU that the fit just wasn’t there. So give the kid a ton of credit for staying confident, finding a place that did fit and making the most of his opportunity. Beyond that, every time they show Houston coach Kelvin Sampson, who coached at Oklahoma for 12 seasons, KU fans no doubt flash back to the Senior Night when a junior Jayhawk named Paul Pierce went off in what turned out to be his last game at Allen Fieldhouse, inspiring Sampson to step onto the floor and smack him on the backside after Pierce drilled another jumper.

I have to root for the Big 12. Plus my son graduated from Baylor, so support the family. Don't have a second favorite.

Grimes made AP 3rd Team All America this year. I still do not understand why "KU was not a good fit" for him. Root cause anyone?

As for great Freshman, Cade "Cangaroo Cid" Cunningham made AP 1st Team. And the other 3 Freshmen who made AP 2nd Team are still alive and kicking! Jalen Suggs, Evan Mobley, and Hunter Dickinson.

So, of the 8 Teams left competing , I will sum up their number of AP All Americans:

Could this be the year when Gonzaga finally "cuts down the nets"?

I always thought Quentin Grimes wasn't really doing what Self needed him to do in playing better than Devon Dotson and he wasn't willing to wait until Devon was likely to go to the League, since Quentin was supposed to be the one and done. I do wish we had him this year (and potentially next year).