3rd-seeded Jayhawks prove, once again, they can win while playing someone else's style 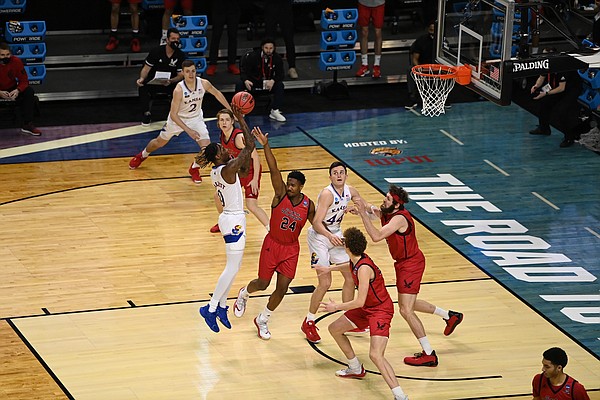 Indianapolis — In Round 1 of the 2021 NCAA Tournament on Saturday afternoon, third-seeded Kansas faced a team that liked to score and had to climb into the 90s to get the victory.

The last time KU crossed the 90-point threshold came six weeks ago, when KU blitzed Iowa State 97-64 at the outset of a five-game winning streak that sparked a late-season run of nine wins in 10 games, counting Saturday’s 93-84 Round 1 win over Eastern Washington.

In the days between the two 90-point outbursts, the Kansas offense averaged 67 points per game and held its opponents to a paltry 58.4 points per game.

Eastern Washington scored 26 points more than that on Saturday — that’s darn near like giving a team an extra half’s worth of offense given the way the KU D had played of late — and the Jayhawks didn’t blink.

Beggars can’t be choosers in March, though. And even if your team would prefer to play its games in the 60s, as Bill Self’s Jayhawks would this season, sometimes Cinderella or Uncle Mo have other plans.

If you can’t adapt, you won’t last. The Jayhawks can. And they proved it on Saturday.

Nobody’s going to call Kansas the team to beat after knocking off a No. 14 seed. Nor should they. But it’s more the way the Jayhawks won than it is who they beat that made Saturday’s win stand out.

And now the Jayhawks move forward knowing they can win while playing a number of different styles.

Look no further than Texas’ first-round loss to Abilene Christian on Saturday night for proof of the importance of being able to play different styles.

The Longhorns, who had the nation’s 28th best offense according to KenPom.com’s efficiency rankings, got caught up in a defensive battle with ACU and lost 53-52.

Abilene Christian’s defensive efficiency rank according to KenPom? Twenty-fourth. The Wildcats played their game and won.

Here’s a look at a handful of the different ways Kansas has won this season:

• Crushing a team from start to finish while clicking on all cylinders? Check.

• Suffocating teams with nasty defense and needing to score in the low-60s to win? Check.

• Coming back from 15 down in the second half against a team you’re heavily favored to beat? Check.

• Playing a great first half, falling apart in the second and still finding a way to close down the stretch? Check.

• Scoring 90+ in an NCAA Tournament game in which you trailed by 10 in the second half? Check.

“Hopefully this will give us some confidence, offensively, but also be a reality check,” Self said after Saturday’s victory. “We have to start grinding on the defensive end.”

No one would be caught off guard by Self emphasizing the importance of defense. But his theory about the two ends of the floor co-existing in a productive manner in March goes back to real world data that one of his past teams experienced.

“We played Carolina in the NCAA Tournament and it’s like 48-48 halftime or something,” began Self, recalling an Elite Eight game in 2012 that was tied 47-all at the half. “And our guys were so confident at halftime because they knew that wasn't us. That's not how we play. We played their game and we still were tied. So now, if we play our game, we'd be in good shape.”

The Jayhawks most certainly were. After giving up nearly 50 in the first half of that one, the Kansas D clamped down and held the Tar Heels to 20 points in the second half en route to an 80-67 victory that sent them to the Final Four.

“I'm hoping we kind of feel this way now,” Self added Saturday. “I'm happy we scored some points, but that's not real. What's real is we’ve got to defend and we’ve got to rebound. If we do those things, we can play with folks.”

Kansas gave up 46 points to Eastern Washington on Saturday and then held the Eagles to 22 through the first 15 minutes of the second half while reclaiming control of the game heading into the final five minutes.

“If you’d have given me those numbers before the game, I’d have said we won,” Eastern Washington coach Shantay Legans said after the loss before his face gave way to an involuntary half-laugh, half-smile of astonishment.

They didn’t. Kansas did. Because the Jayhawks showed they can play more than one style while finding moments to rely on what they do best.

The Jayhawks took care of the ball while eventually getting the Eagles to make a lot of turnovers.