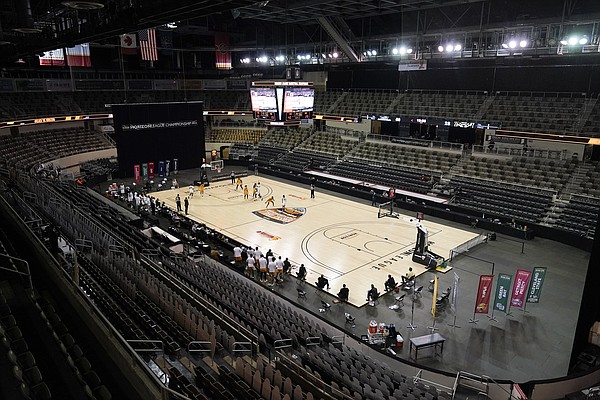 Oakland and Cleveland State play at Indiana Farmers Coliseum during the second half of an NCAA college basketball game in the men's Horizon League conference tournament championship game, Tuesday, March 9, 2021, in Indianapolis. The coliseum is one of six venues hosting NCAA Tournament games later this week, and is where No. 3 seed Kansas will take on No. 14 seed Eastern Washington at 12:15 p.m. Saturday, March 20, 2021. by Darron Cummings/AP Photo

But the third-seeded Jayhawks will be able to check both of those feats off of their list again on Saturday, after they face 14th-seeded Eastern Washington inside Indiana Farmers Coliseum in Indianapolis.

Located on the Indiana State Fairgrounds property and constructed for $1 million in 1939 as part of President Franklin D. Roosevelt’s New Deal, Farmers Coliseum is the current home of the Indiana University-Purdue University Indianapolis Jaguars.

But there’s much more to this building than its current tie to its Horizon League tenant, as some of the biggest names in United States history once passed through the venue that has had a variety of names throughout the years, including Indiana State Fairgrounds Coliseum, Pepsi Coliseum and Fairgrounds Coliseum.

John F. Kennedy once campaigned for President inside the building in 1960. And The Beatles, in 1964, made their only appearance in the state of Indiana inside the old school venue that locals say has a hint of the same flare and style that makes Butler’s Hinkle Fieldhouse, just down the street, one of the better known venues in college hoops.

The Indiana Pacers called the building home during their American Basketball Association days from 1967-74, and the Indiana high school basketball state championship was held at the coliseum from 1943-45.

Farmers Coliseum closed in 2012 and reopened in 2014 after undergoing $63 million worth of renovations to modernize the facility.

Per the NCAA Tournament’s COVID-19 guidelines for the 2021 event, all venues hosting this year’s tournament in and around Indianapolis that will be used for March Madness will be allowed to have up to 25% capacity.

That allows for a crowd of roughly 1,650 fans for the Kansas-Eastern Washington game on Saturday.

A KU spokesman told the Journal-World that the school received an allotment of 350 tickets for the Jayhawks’ Round 1 game. All of them are going to player/staff family and/or donors.

It is not yet known what KU’s allotment will be for Round 2, if the Jayhawks advance, because of the potential to switch venues between rounds, the spokesman said.

Tickets for Saturday’s KU-EWU game also are available on the secondary market for anywhere between $133-$344 dollars.

Basketball Friends | How will COVID scare affect Kansas in NCAA Tournament? by KUsports.com