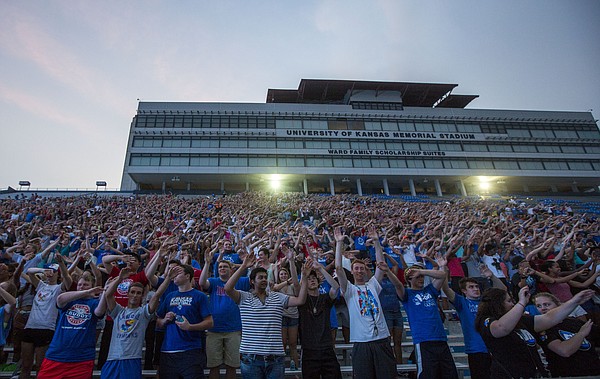 Incoming freshman learn how to wave the wheat at KU Traditions Night Saturday evening at Memorial Stadium. The annual event held before the start of each new school year aims to teach incoming freshmen about the traditions that make KU unique. by Mike Yoder

The last time KU had an opening for an athletic director, I received a handful of calls from a few former KU football players touting Mike Harrity, then at Notre Dame, as a guy that Kansas should consider.

Today, with that job open once again, the man who coached a lot of those players who called me is throwing his support behind Harrity, who is now a Deputy AD and COO at Army.

Former KU football coach Mark Mangino took to Twitter on Thursday afternoon to offer up what he dubbed, “My 2 cents” about Harrity.

“KU should approach Army Deputy Ath. Director/COO, Mike Harrity for their AD position,” wrote Mangino. “Mike is a KU grad. He worked in Ath. Administration there as well as Notre Dame. He’s smart, hardworking & well liked. He was my go to guy as HC. #cantmiss.”

According to his bio, Harrity currently leads Army’s daily operations in the areas of Sports Performance (sports medicine, strength and conditioning, and performance nutrition), Strategic Communication (athletic communications, digital and social strategies, creative and video services, and broadcasting) and Licensing and Branding.

Hired in February of 2020, he also has helped oversee the Development area, as Army West Point Athletics has embarked on a major capital campaign, and assisted with the administration oversight for Army Football in addition to serving as a sport administrator for other varsity sport teams.

His connection to Army Football and Army coach Jeff Monken, who has been named on several lists as a potential successor to Les Miles at KU, no doubt would intrigue Kansas fans. Whether Harrity could deliver Monken — or if Monken would even be interested in the job — remain unknowns at this point.

Harrity grew up in Kansas City, Kan., and earned a journalism scholarship to The University of Kansas, where he was the first person in his entire extended family to graduate from college.

Full disclosure: Harrity and I were classmates at the J School, which puts him somewhere around the age of 42, and I remember him being very well liked by everybody he came in contact with.

At KU, Harrity was responsible for developing, coordinating and executing the Kansas Athletics staff’s community involvement, outreach and relationship-building while also heading up relationship-building and outreach to former student-athletes who have achieved success in professional athletics and business.

A few years back, I talked with Harrity about one of his crowning achievements outside of a college athletic department, his 2012 book titled “Coaching Wisdom,” in which he solicited the help of 13 college coaches who had won a combined 103 championships — including Lou Holtz and John Wooden — to examine the creation of cultures of sustained excellence.

The book is definitely worth checking out. And Harrity might be, as well.

His young age and limited experience with hiring coaches are certainly obstacles that could be tough to overcome. And he's probably a long shot to get involved. But even though it's been more than a decade since Mangino left town, his words still mean a lot to the KU fan base, so it's worth passing along.

If we hire an AD that is endorsed by Mark Mangino...does that put an end of "The Curse of the Mangino"...?

My worry on this one, is the AD might be good, but the hiring would focus likely on Monken and i would fear the run only offense.

There aren't many people KU fans wouldn't hire if it was guaranteed to end "the curse"... Mike's probably a pretty big long shot here, but I'm never going to skip looking into something/someone whose name surfaces. You just never know.

You mean the run only offense that almost beat OU at OU? Or the one that put a group of 2 star recruits into the top 25? Monken’s offense works against the best competition over and over and over again. Sounds like a plus. Not a minus.

Obstacles? We've had three straight ADs make a total mess out of things, I'm fine with the obstacles you mention. I'm so tired of retread hires like Weiss, Miles, Long. We should have hired Dave Doeren when we had the chance!

Brett is right for once. Run only uses the clock and gives defense fewer snaps. Throw in a great punter and a great fg kicker and you would already see a big difference. Rcjh