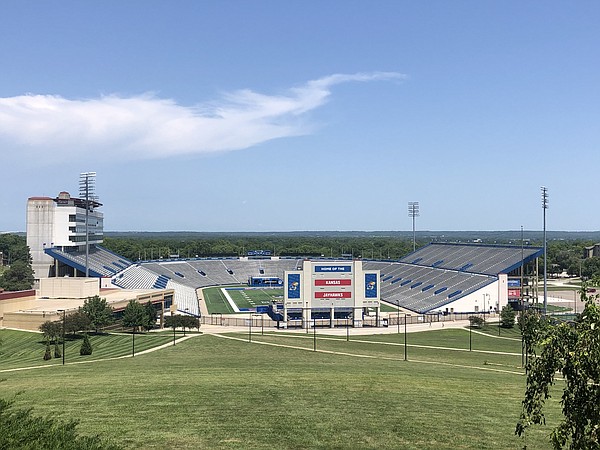 The view of David Booth Kansas Memorial Stadium from the top of Campanile hill in July 2020. by Matt Tait

Editor's Note: This blog was posted just a couple of hours before KU Athletic Director Jeff Long and Chancellor Douglas Girod announced that Long was stepping down as KU's AD.

Anyone can make a coaching candidate list. And if you look right now you’ll find no fewer than 25 such lists out there that correspond to the suddenly vacant football job at the University of Kansas.

We’ll have our list, too. And it likely won’t be the last one we make, depending, of course, on how long the process of hiring a replacement for Les Miles takes.

Could be weeks. Could be months. A lot of it may depend on what Kansas does with the interim head coaching tag — we have our thoughts on that here and here — and whether KU AD Jeff Long is looking to hire a new head coach for the 2021 season or if he’s willing to let an interim coach run the show for the upcoming season, therein giving KU time to do a proper search and bring in the best candidate possible.

A lot of the names on the aforementioned lists that are circulating right now are names you’ve heard before. Many of them have been tied to past coaching searches at Kansas. Many of them also have been in the mix for other open jobs during the past couple of years.

There’s little doubt that KU will be able to pick from a pool of quality coaches, regardless of where it looks, how much it wants to pay or even who’s making the hire.

As things stand today, Long, with the help of a search firm, is in position to do that. But there’s a segment of the Kansas fan base — which may include some pretty influential names — who would just assume someone else make the pick this time around.

We’ll see how all of that plays out and what that means for the search in due time. But no matter what happens or who’s making the hire, it should not have any bearing on what Kansas is looking for in its next head football coach.

The bottom line is this: The KU job is not for the faint of heart. Nor is it a popularity contest. The next man who occupies the corner office at the Anderson Family Football Complex needs to be a grinder. Plain and simple.

Who cares if he sells tickets or looks good on posters?

Who cares how old he is? Or how young he is?

Who cares what his resume looks like or what programs he has ties to in the past?

Who cares if he runs the Air Raid, the Triple Option, The West Coast Offense or some version of what Don Shula ran with the Dolphins?

Scheme and talent alone do not win at Kansas.

Even having a chance at finding success in Lawrence requires someone with a proven system and unbelievable work ethic. Passion — for the sport and his players — is also a plus.

And when it comes to that coach’s system, whatever it is, it’s best if it has proven to work at multiple places and with more than just one great quarterback.

For more than a decade now, this program has lacked a true culture and a foundation upon which it can build. Bad hires and quick triggers are to blame for some of that. And that’s why identifying a new head coach who will bring an established culture and identity with him should be a top priority this time around.

The list is long of coaches who can sit in an interview and tell you what they’re going to do, how they’re going to do it and get you excited about their vision for the future of Kansas football. It’s what the interview process is all about from that side of the table. And it can be an awfully exciting time.

But it must be adhered to closely if KU’s going to crawl out of the gutter and win back the support of its fan base.

I agree and add to that the ability to develop players, we will never get many 4 stars, a 5 star dream on, so that means that we have to develop the 3 star players we get, and perhaps most importantly we have to devise our schemes to match the talent of the players we have, not the one we wish we had.

Also in terms of being a grinder, we need someone who is not ashamed to do things that might look old fashioned, or be boring, but just might give the team a chance to win. Clock management, a great punter and a great field goal kicker, those things would do wonders.

Speaking of grinding, Jeff Monken would be my first choice. But would he even consider coming? He seems happily entrenched at Army, with a healthy program and great support of the administration. But I hope KU gives it their best shot to get him.

Bring back turner gill! Firing him was a mistake.

Drop football. This shyte-show just gets better and better. Right now our football program is the worst of the worst. Save money and spend it on basketball. On the basketball front it would have been better for the program to plead no contest and by now we would be off probation already. So far there has been a lot of smoke and mirrors by the NCAA but it is affecting recruiting with no end in sight.

Ran across a couple of articles... at first I thought no way, then I read the articles and watched the video. Hmmm, maybe this guy, Kevin Kelley, would be worth a shot... or not. Maybe... Bill Bellichick sure seems to be high on this guy...

This seems to be another roll of the dice we've been guilty of the last several hires, and the opposite of the "grinder" Matt talks about in the article. Also, Notre Dame tried this exact scenario with Gerry Faust in the early 1980s. Didn't work.

A quality list of candidates no matter how much we pay?

And the winner is: Dropping football and joining the Big East Conference.

And keep him 8 years.

No Robert, you mean the American Conference where we can play Wichita St, 2 times a year at least.

Big East is made up of all Catholic Schools, of course we could change our orientation, the state has tried to destroy the university anyway.

And for those who want to get rid of Coach Self, this is guaranteed, he has always said he will not coach at a non top 5 conference school, so there you have it all wrapped up in a bow.