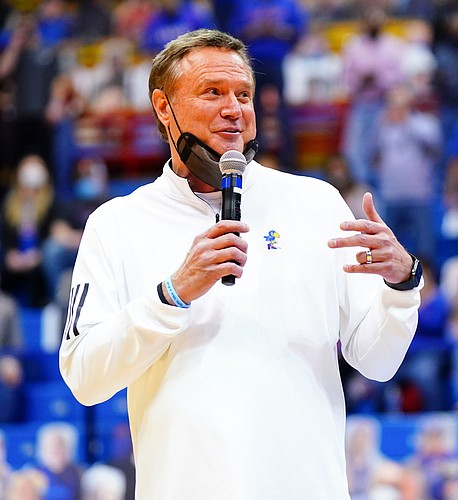 As the Kansas men’s basketball program full of new faces reaches the end of June, head coach Bill Self believes the team may actually be a little ahead of schedule compared to a season ago.

A big reason for that is the fact that the pandemic kept the Jayhawks from being on campus for the entirety of the summer of 2020.

This summer, it’s been back to normal, with most of KU’s players reporting to campus in early June. That has allowed the Jayhawks to workout together, stay in touch with the coaches and build the kind of chemistry they believe will be a key part of the 2021-22 season.

Coming together as a team will be particularly important for the 2021-22 Jayhawks given the fact that the roster is expected to include 10 players who are completely new to the program — eight scholarship players and two walk-ons.

While bringing so many new faces to town already has made this offseason different from most, Self recently told the Journal-World he was not at all worried about putting it all together.

“I think that’s our job to get them to do that,” he said during a recent phone interview. “And we have the whole summer together. Last year, with not having the summer and the way everything was moved back, I think it set back the quality of ball, especially for young kids entering the program. I don’t think it’ll be that way this year. I think the quality of ball will be better right off the bat just because we would have had June and July.”

Beyond the timeline working in KU’s favor, Self said he believed his coaching staff, which includes Jeremy Case still working in the role of interim assistant, is more eager than ever to get back to work and tackle the challenge of welcoming so many new players into the KU family.

“This is fun,” Self said during a recent appearance on the Courtside with Greenberg and Dakich podcast. “And it's also a little scary because they don’t have a clue yet on what you really want or what you think is important, which is fine. You’re not going to win any games in June anyway. But I think it's been refreshing and fun.”

Despite KU’s status as a consensus top-five program in the offseason polls, Self is well aware of the fact that getting all of these newcomers on the same page is far from automatic.

But he also noted that focusing on what each player needs to do individually to improve and be ready for the season will increase the odds of things coming together when the season gets rolling.

“We all struggle with different things, and experience does matter,” Self told the Journal-World. “We don’t want to play games in August and September. But I really believe that if we do our jobs and they come with the right mindset and the right attitude, we could be a team by the end of the year next year that's as cohesive as any team.

“Sometimes it works a little better than others. Guys get used to playing with each other and all these things. But that’s not the concern. My concern would be the talent, the work ethic, the responsibility, the discipline, the athletic ability. That would be my concern. Putting them together would be the easier part of it.”

For what it’s worth, a couple of KU’s top returners who have been through roster turnover before believe there’s plenty of time to gel.

“It's definitely been hectic, with all the new guys,” KU senior David McCormack said. “I've never been on a team with so many new people, but I think we have a great group of guys.”

“It's just building relationships every day,” Braun said. “We're here in the summer for a reason and one reason we come up here as early as we do is to get to know each other as people, more importantly, and then we'll get on the court and figure it out there. But we’ve got a lot of guys that are really talented, there’s a lot of competition and I think we’ll be ready.”

KU may have a lot of talent in 2021-22, but Bill Self will find a way to waste that talent in March as he always does (assuming the NCAA will allow us to play in March this season, that is...). Why, oh why did we let this guy have a "lifetime contract"?

Are you day drinking?

Why YES - - YES - - Brian I believe ol Bryce - -just might well be hitting the bottle - maybe a little too much. What other possible sane possibility could there be lol. - -ROCK CHALK ALL DAY LONG BABY

Have you found a new more successful team to cheer for yet?

Coach K is leaving Duke and will be KU's coach in a season or two. You didn't hear that? Yeah, you finally are getting the higher ups in the athletic department to listen to your valued insight. Just be patient.

Hey Bryce, are you wearing purple jammies with little cats all over them?? You sound like a KSUck fan!!

I'm pumped and think this team will regain its rightful status as the team through which others must go if they want the b12 championship. We got this!

Hey Brett- are you going to let Mr. Landon upstage you like that? He's doing you better than yourself. better step up your game! :)

8 scholies, does that mean Martin decided to join KU?

Editor: there is no value to Mr. Landon's ongoing presence here. He is the definition of a troll and does not provide meaningful ideas, rather harping on the purported failures of post-season, no matter the actual contact of the post the LJW has presented. Please warn and then remove him when (a given) he again fails to respond to specific content.

ANOTHER CLASSIC post Bryce - - Well done - - well done indeed. - did you by chance give ANY thought to what the H - - - came out of your mouth or does that just comes Natural ? lol - -Always look forward to your so enlightening comments. - Absolutely Priceless. - -Pssst please. Do us all a favor just don't bother if you can't do any better then that. - - ROCK CHALK ALL DAY LONG BABY