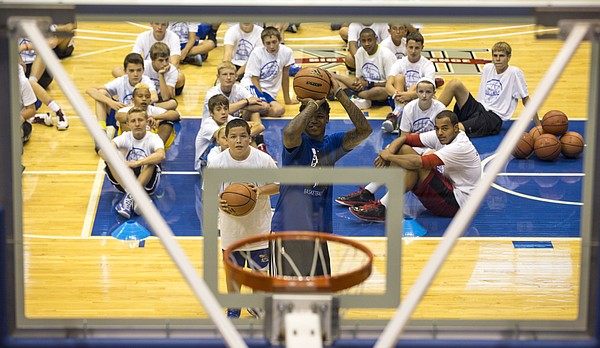 Eleven-year-old Chris Fields waits for his turn to shoot as he and former Kansas University player Ben McLemore duel it out in a game of knockout as other campers watch during the Bill Self basketball camp Saturday at Allen Fieldhouse. by John Young

After a year off because of the pandemic, Bill Self Basketball Camps at KU are back in full swing and, in some ways, better than ever.

“Our first camp, in late June, was very successful, even though it was different,” Self told the Journal-World this week when looking ahead to the final two sessions at the end of the month.

The camps, which typically feature instruction and interaction with current and former KU players and coaches, are open to boys in 3rd through 12th grade and girls in 3rd through 6th grade.

The next two camps are slated to run July 23-25 and July 26-28 on KU’s campus. Like the first one, both have become day camps instead of overnighters because of COVID-19 protocols on campus. But Self said that was the only difference between past camps and the ones taking place this year.

“Our players worked with the kids every day of the camp and I think there has been more individual attention from our players and staff this year than ever before,” Self said. “It’s a great opportunity for kids to see our program as up close as you can get.”

For more information on the camps, contact the men’s basketball office at 785-864-3056 or via email at kuteamcamp@gmail.com.

To reserve a spot online, you can head to the Bill Self Basketball Camp home page to register for either session.

While it’s understandable that boys and girls could be grouped together when young, it would seem there should be opportunities for JH and HS girls.

Glad the kids are getting a chance to return. Must be a thrill. Oh to be 12 again though 12 year old me didn’t have the aptitude or resources to attend.

I now work with a nonprofit that takes kids on outings. Part of what I appreciate is there are always spots reserved for kids needing financial assistance though they are never identified in the groups. Do the KU BB camps give need based scholarships?

I went to camps when I was this age, but I was told it was so I wouldn't burn down the house accidentally while my parents were at work. You launch one model rocket that ends up landing on the roof of the building where your mother is working and trust goes right out the window (true story). Like I could figure out a launch trajectory when I was 12.