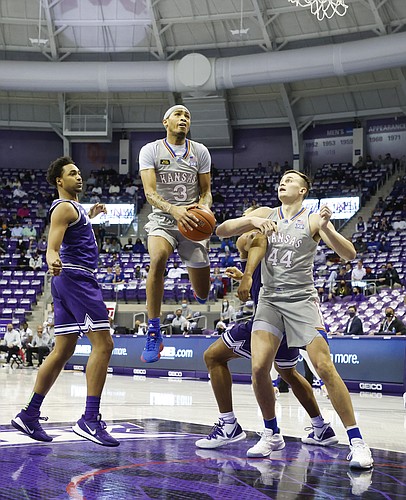 Kansas freshman Dajuan Harris Jr. goes up for a layup during a game against TCU Tuesday night at Schollmaier Arena in Fort Worth, Texas on January 5, 2021. (Photo/Gregg Ellman) by Associated Press

Kansas freshman Dajuan Harris knew well in advance of Tuesday’s 93-64 victory at TCU that senior Marcus Garrett might be out because of a head injury and that he might be asked to step up in Garrett’s absence.

And he played like he was perfectly comfortable with that being the case.

In 27 minutes of running the show for the sixth-ranked Jayhawks (9-2 overall, 3-1 Big 12), Harris scored seven points, dished seven assists and flashed the kind of steady play and poise that you’d expect from a point guard.

That he was doing it just 11 games into his first season as a college basketball player was noteworthy. That he did it so smoothly on a night when Kansas, as a whole, needed a big time bounce-back after being drubbed at home by Texas just three days earlier made the performance all the more impressive.

“We don't ever want to play without (Garrett),” Kansas coach Bill Self said after Tuesday’s victory. “But you can't rush something like that. And he wanted to be out there. But I thought 'Juan did a lot of really good things. … I thought he was really solid and got the ball where it needed to go.”

Even in the short span of Harris’ KU career thus far, that has been what the 6-foot-1, 170-pound guard from Columbia, Mo., has made his signature.

More often than not, when Harris is on the floor, the Kansas offense looks better, runs smoother and finds ways to get more easy baskets.

Credit Harris’ vision and skills as a passer for some of that. But credit his approach for the rest. Never one who looks to score first, Harris is happy to set others up and always has been, since he began playing basketball.

ESPN color analyst Fran Fraschilla called him a pass first, second, third, fourth, fifth and sixth point guard during Tuesday’s broadcast. And Harris’ teammates and coaches have consistently praised him for that very same thing throughout his first two years in Lawrence.

Added sophomore Tristan Enaruna, who broke out with career-highs in points (12) and rebounds (7) to help fill some of the void left by Garrett being on the bench: “We knew as a team we could trust him.”

"Obviously, it's hard when you lose your starting point guard,” Enaruna added. “But I think (Harris) did a good job. I think he kept his head calm. And he did everything he could to fill Marcus' spot, gave everybody good looks, got himself some good looks. He made the ball move really well."

Even Garrett himself came away impressed by what he saw from his understudy.

Although the Kansas senior did not talk to the media after Tuesday’s game, he did make his thoughts on Harris’ play known on Twitter, when he wrote the words “Dajuan Harris is the tweet" around an emoji of a goat, which, in the sports world, commonly stands for “Greatest Of All-Time.”

Harris may not be there yet. But Tuesday’s performance was a big step in his process.

None by Marcus Garrett

We ain't seen nothing yet. Harris has a surprise in next few games. A nice one.

Harris may have been the impetus but the real key for this team to excel will be for every player to maintain the expectation that their involvement, whatever it is, must be amped up. We can’t let depth, what should be a strength on this team, be neutralized Effort can’t be delegated to starters or only necessary at certain times. It’s cliche to talk about giving 100% or some amount more. The reality is that even when giving what feels like 100%, the more elite find another level of effort whether that be in the game, on the bench, or in preparation. The latter becomes more important the farther you go in anything.