Jayhawks' defense inviting teams to get hot from 3-point range 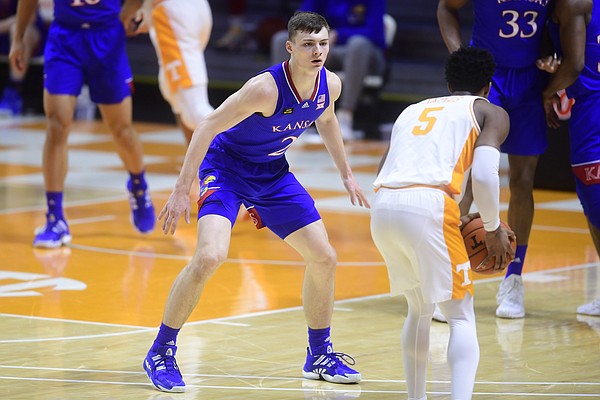 Kansas guard Christian Braun (2) defends against Tennessee guard Josiah-Jordan James (5) during a basketball game between the Tennessee Volunteers and the Kansas Jayhawks at Thompson-Boling Arena in Knoxville, Tennessee on Saturday, January 30, 2021. by Tennessee Athletics

Hop onto Twitter during any Kansas basketball game these days and you’re liable to see a few — or a few hundred — KU fans bemoaning the fact that the opposing team, which is not always known as a great shooting squad, is lighting up the Jayhawks from the outside.

While bad luck or the unfair fairy usually catch most of the heat, it turns out that the Jayhawks themselves are largely to blame.

“I don’t think that we’ve got the personnel, as much as we’ve had, to be there on the catch (and) we're not a real quick team,” said Kansas coach Bill Self when asked after Saturday’s 80-61 loss at Tennessee if the way the Jayhawks were defending teams was encouraging teams to fire away from beyond the 3-point line. “More inviting would probably be the answer, but when you allow a guy to catch the ball on the (3-point) line and you close out short, it's a relatively in-rhythm type shot.”

Although Tennessee appeared to outplay the Jayhawks in most areas on Saturday, the discrepancy in 3-point shooting between the two teams — again, not necessarily a strength for the Vols coming into the game — stood out the most.

Kansas shot just 25% from behind the arc (6-of-24) and made just 2 of its first 17 3-point tries before throwing in a few late with the game well out of reach.

Tennessee, meanwhile, drained five of seven triples in the first half and finished 8-of-13 for the game, good for 62%.

So many of the Volunteers shots were shot over Kansas defenders that were in good guarding position, but appeared to be playing the drive more than worrying about the shot, which allowed the Vols players clean looks all evening.

"Guys caught it and shot it on us,” Self said after Saturday’s loss. “We need to make them catch it a step further out and then close out short, and we don’t do that much. We don’t do much to play our man before he catches it.”

While the answer was addressing the 3-point issues, that fact is true for KU’s big men in the post, as well. And it has led to a rough month for the Jayhawks, who wrapped up January at 11-6 overall and 5-4 in Big 12 play, but just 3-5 since the new year arrived.

Seven of the KU’s eight January opponents hit at least eight 3-pointers against the Jayhawks. And five of those seven hit at least 40% from 3-point range.

For the most part, KU’s opponents have gotten tougher, to be sure, but Self believes his team’s defense also has made it too easy on teams.

Just two of KU’s final nine opponents — Baylor at No. 1 and West Virginia at 81st — rank in the top 100 in 3-point shooting according to KenPom.com. And KU will play six games against team who currently rank 183rd or worse in that category. So it’s possible that the numbers soon will even out and KU will start seeing teams do less damage from the outside against them.

But rather than hoping that the percentages slide back in his team’s favor, Self is hoping that his team will change the way it defends the arc this month.

“We're not giving up on that by any stretch,” Self added Saturday. “But we're not near as aggressive or near as athletic on the perimeter as we have been in the past.”

Coach, do you think other coaches live and die with 3pt shooting only? Don't underestimate the other coaches. They have better offense strategy. If you tighten the perimeter, they can score inside easily. It's the power of always in-motion offense. That's good basketball. They will move the ball, screen each other, etc.

These days: 1. More kids can shoot the 3s - you like it or not, that's the evolution of NCAA basketball. 2. Teams (seen with good coaching) can beat any defense with smart plays, ball movement, screens, etc. 3. How many buckets can you prevent opponent from scoring with your best defense? How many times do you think you can run out their clock?

Even if you can prevent all those 3, without good offense plays, your team will still get beat. Only difference is by how much. We're a laughing stock now, without ability to score. Once our kids equipped with the right tool (coaching) to make baskets, I'm 100% sure, our defense will improve. Right now, you ask them to tighten the defense, but they don't know how to score, all of this for what?

Why am I having trepidation about tomorrow nights game against K-State? They're best chance against us is to make 3s and they have one that just made 8 in their last game. We give everyone what they practice. What will it take for this team to actually defend and play team defense and make people uncomfortable? And of course, what will it take to put the ball in the basket?
It's not been fun to go into every game thinking we will get it together and realize our potential and it's only gotten worse. Not a good time for Jayhawk nation.

Bill Self: “I don’t think that we’ve got the personnel, as much as we’ve had, to be there on the catch (and) we're not a real quick team."

Hey Coach, maybe instead of cracking on your players, how about you and your staff figure out how to use the players you've got! Ever think of that one?

Apply for the job Bryce. I'm sure sitting in your recliner that you have all the answers!

It all comes down to his feeding-the-post idolation, thinking one big can do it all (in B12, at least). The rest he figures can be done through defense. Yes, motto Defense wins it all is tatooed in his forehead. Maybe with the right combination - he proved it with '07-'08 team (with a bit of luck, because Rose could've aced the game, would've been different story). Well, then it's hard to argue when we have PGs like Graham, and 3pt shooters. That's why he gets paid big $$$.

It’s got nothing to do with personnel. We stand at least 5 feet away from the shooters. Always. We need to be in their shorts even if they occasionally drive around us. If anyone hasn’t noticed, three points is more than two points.

The last few games I have watched, is like what Matt Tait titled this article. we seem to be daring other teams to shoot the 3 by standing 3-5 feet away from the shooter. Like David Robinett said, we need to be in their shorts, especially when they are standing stationary behind the three point line dribbling the ball, like Marcus Garrett did last year. That's why he won the defensive player of the year. This team seems to not have the urgency to get in the opposing players face, and getting them to turn over the ball. Instead, we stand back and give them the green light to shoot, and not closing in fast enough to disrupt the shot. This is hard for me to understand, since most of these players were on the team last year. Of course the biggest problem is, WE CANNOT MAKE BASKETS!