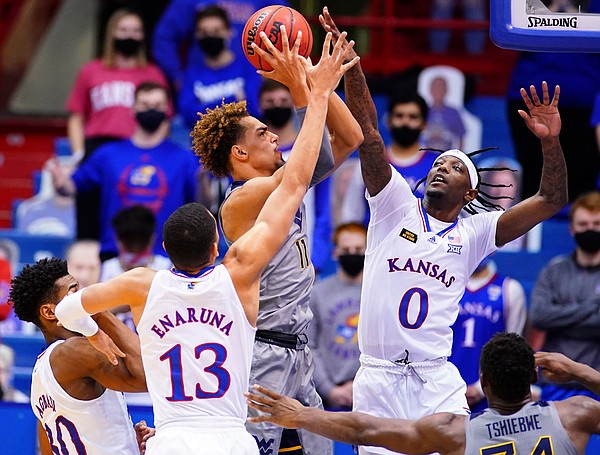 Kansas guard Marcus Garrett (0) comes in to defend against a shot from West Virginia forward Emmitt Matthews Jr. (11) during the first half, Tuesday, Dec. 22, 2020 at Allen Fieldhouse. by Nick Krug

If you’ve paid much attention to Kansas basketball during the past couple of decades, you surely have heard KU coach Bill Self talk plenty about how making shots does not define a good possession.

Making shots is critical. And it’s an important part of putting points on the board and winning basketball games.

After all, sometimes the ball just bounces a little funny and shots that should go in just don’t. Other times, shots that have no business falling through the net find a way to do just that. Such is life.

“You don't have to make every shot,” a spirited Self said Monday night, during his latest “Hawk Talk” radio show with Brian Hanni when discussing what he wants to see more of from his team in the weeks ahead. “Matter of fact, I don't give a crap if guys make shots. Of course, to win games you need to make shots. But hey, figure out a way (to impact winning when you’re missing shots).”

Self went on to explain exactly what that last part looks like.

“(If) you miss shots, you can’t get zero rebounds,” he said.

“(If) you miss shots, you can’t let a team score (in) the last three seconds of the shot clock,” he explained.

Self then summed up his point.

“When things aren't going well, you have to grind to be a little tougher in other areas,” he said. “And I don't think we're playing like that. I think we're still playing like things are going better than what they are and we don't have that extra gear we’re getting to.”

Not surprisingly, Self believes that finding that gear is all about the defensive end of the floor.

Late in the first half against of last Saturday’s 75-68 loss at Oklahoma, KU found itself trailing by seven points (27-20) with 6:08 to play but cut the gap to one by halftime by limiting the Sooners to just one field goal the rest of the way.

“For a five-minute stretch, we didn't give a crap about scoring the ball,” Self emphasized. “All we gave a crap about, from the appearance that I had, was making sure they didn't. Isn't that a kind of an eye opener to that's how you win?”

It is to Self. And it’s obvious to his assistant coaches, former players and even a lot of KU’s die-hard fans.

The game, which was rescheduled from Tuesday night because of COVID-19 issues within the TCU program, will be the Jayhawks’ first home game in 19 days.

'play hard, play together, play smart, have fun and try to guard'--- LB

Steve - Does this help you understand the other articles? Your misunderstanding about what wins games and championships?

There’s a reason he is where he is and we’re on the “brilliant” side of the keyboard.

Dirk, can you please be more specific? Do you understand what I was trying to say through LB's quote?

Steve - I think it was the “what really wins” article. Coach focused on D, and you commented on O being more important.