Bill Self: Early offense does not always equal a fast start for Kansas 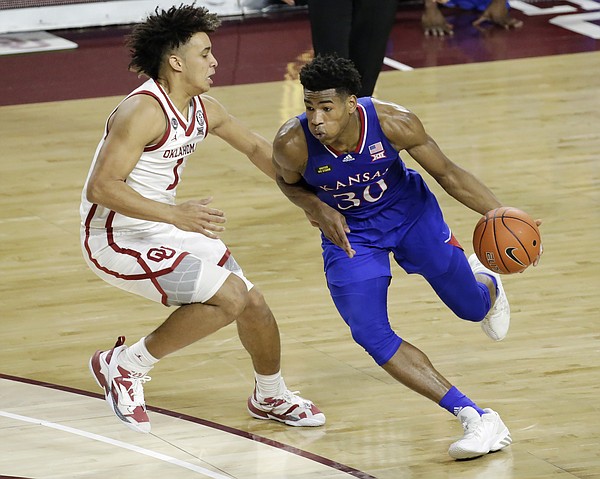 After seeking faster, better starts than the ones they delivered in some of their recent games, the Kansas men’s basketball team opened Saturday’s loss at Oklahoma by hitting six of its first nine shots and racing out to a 16-10 lead.

After the game, which went much rougher than the opening few minutes and turned into a 75-68 KU loss, Kansas coach Bill Self explained why he did not consider KU’s play in the opening minutes against OU to be a fast start.

“The way I look at this, and you guys will probably think I'm nuts, I look at it as where we would be if we weren't making shots,” Self said on Saturday.

In the familiar spot of trailing early is the answer to that question.

In recent losses to Oklahoma State, Baylor and Texas — and even in their home win over OU — the Jayhawks misfired early and fell into 7-10 point holes as a result.

So while starting out last Saturday’s game at Oklahoma by making shots was a step in the right direction, it did not come close to solving KU’s biggest problem. Try as it might, this team still struggles to guard the ball, particularly late in the shot clock when the floor is spread.

Self further hammered home the point about defense being the key to this team getting back on track by explaining that teams that can defend at an elite level can open games with the feeling that they’re not playing very well and miss a few shots only to look up at the scoreboard and see they’re ahead by two.

“Guys just made shots,” Self said of KU’s start at Oklahoma. “But I don't feel like we took advantage of us making shots because we allowed them to as well.”

Had Kansas been able to pair its hot shooting start at Oklahoma with some better defense, Self believes the Jayhawks could have opened with an even bigger lead and taken more control of the game.

Instead, the KU offense quickly cooled off — making just three of 18 shots the rest of the half — and the defense disappeared altogether during a 14-0 Sooners run that put Oklahoma in control of how the rest of the game went.

“Really, what the game came down to, even though we didn't rebound very well and certainly didn't run great offense over a 40-minute period, was can you guard your man,” Self said. “They beat us off of basically going one on one.”

After the loss, Self pointed to his team’s struggles with transition defense, deflected balls going through players' hands and the Jayhawks’ inability, at times, to find their assignments and settle in defensively even after made baskets, as the things that drove him “crazy” about KU’s latest defensive effort.

The numbers will show that this Kansas team has been good defensively this season. KenPom.com still lists KU in the top 20 of its adjusted defensive efficiency rankings at No. 19 overall at 91.4 points allowed per 100 possessions.

To put that in perspective, Baylor, which is ranked No. 2 overall and No. 1 in KenPom’s defensive efficiency rankings, is allowing 87 points per 100 possessions. So it’s not like Kansas is that far off of where it needs to be and from where Self typically pushes his teams to play on that end of the floor.

But there's little doubt that this team's defense is trending in the wrong direction.

In its first eight games of the season, Kansas allowed just one opponent (No. 1 Gonzaga) to reach an offensive efficiency of 100 or higher. However, in the past seven games, five of KU opponents have cracked the century mark in that category.

Put another way, KU is 9-0 in games it keeps its opponent below 100 in KenPom's offensive efficiency rating and 1-5 in games when the KU foe tops 100.

They say defense wins. So it makes sense that no defense often loses.

The poor timing of KU's defensive breakdowns and this team’s inability to consistently guard all five spots on the floor that has contributed greatly to KU’s current three-game losing skid and left the Jayhawks looking for answers.

“We don't have great individual defenders that can lock in and really guard,” Self said. “And that was every evident late (at OU). … You’ve got to be turned up in the last 10 seconds of the shot clock.”

Reigning Naismith Award Defensive Player of the Year Marcus Garrett said after Saturday’s loss that putting bad habits behind them — like soft close-outs, poor communication before and during defensive possessions and bad late-clock execution — is something the Jayhawks have to find a way to do if they want the rest of the season to play out to their liking.

“I just feel like we all just need to lock in defensively,” Garrett said. “It kind of feels like every time we make a mistake, we pay for it.”

I don't believe you can cover all aspects of defense. Most of the times, the opponents have 1 guy that just fires from anywhere - 20pts from one guy, no matter how you guard them. Some other teams, they pass the ball very well and they're more athletic - they can steal the ball from us easily, can't guard them either. How are we going to handle or at least compete against them? Sure we can improve on defense. That will probably address only the former.

But don't you think improving offense makes more sense here? If we play smarter, play better basketball, we could actually beat a few of those teams through offense. Remember, more athletic teams can easily defend us with inferior offense (yes, bunch of TOs). Just my .02 cents.

Steve - The difference is whether a shot goes in or not is sometimes a matter of luck and tiny tiny variations. Defense on the other hand is generally about effort and very controllable. It’s what Coach Self has preached for years and why he’s successful.

He's successful, indeed... winning games, not championship. I can say the same about defense, it depends on who's in charge of whistling. Either way, we don't have kids who can defend against quicker and more athletic teams.

Luck or not, I don't buy that. If the team play together, with effective offense - there's no luck when they play good basketball.

At the pace we're launching offense, sure, it's a matter of luck. But not for teams who can pass well, score high % 2pts, launch 3pts.

Matt - I would suggest a word change in the title. Early offense is a fast start, but isn’t necessarily a good start.