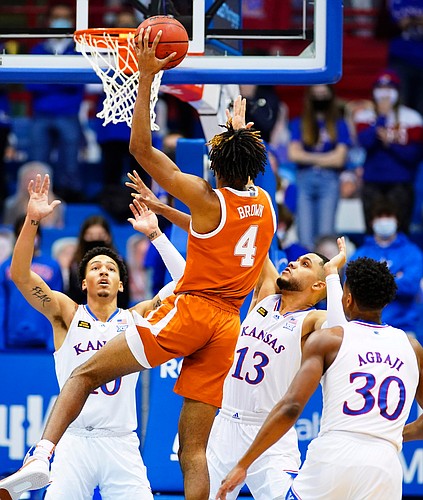 The Kansas Jayhawks have been saying all season that they would have to bring their own energy inside a mostly empty Allen Fieldhouse in order to create something that even comes close to resembling their regular home-court advantage.

On Saturday, in an 84-59 loss to No. 8 Texas, the Jayhawks failed to do that and paid dearly for it.

Of course, the way Kansas played combined with how hot the Longhorns were, KU coach Bill Self had his doubts about whether a full building would’ve changed the outcome.

“Like I told our guys, if we’d had 18,000 packed into Allen today, I don't think it would have made any difference with the outcome of the game,” Self said. “But you do get spoiled when there’s energy when you’re playing poorly, that the crowd (can) kind of pick you up.”

If you’ve seen it once, you’ve seen it 100 times. That kind of Allen Fieldhouse impact is the stuff of legends and has been known to keep opposing coaches and players up at night, trying to find a way to neutralize it or wondering what they could have done to prevent it.

During normal seasons, when 16,300 adoring Kansas fans fill the fieldhouse bleachers, the Jayhawks routinely ride the wave of energy that comes from the crowd a few times per game. In good moments and bad, KU has always been able to count on its sixth man to help it dig deep for that one key run or clutch stop that can swing a game.

But with the pandemic limiting the venue’s capacity to a maximum of 2,500 fans this season, that signature Allen Fieldhouse roar and the instant boost it gives the home team has not been as easy to obtain and likely won’t be arriving any time soon.

Most Kansas teams have had one or two easily identifiable players who the team, and even the coaching staff, could look to when the team's energy level needed to be elevated.

Think Jamari Traylor, Devonte’ Graham, Sherron Collins, Kevin Young or Thomas Robinson. All of them, along with others, led with passion on the court and often found ways to bring that approach out in their teammates.

While this team has that in small doses, Self said the 2020-21 Jayhawks likely will need more than that.

“I think the whole team has to do it collectively,” he said.

Even last year’s team, Self said, didn’t have to intentionally turn up as often because its two All-Americans, Udoka Azubuike and Devon Dotson, both created that naturally with their play and often overpowered opponents.

With this group, getting to that point might require a little extra effort from the coaching staff, Self said.

“Everyone can say that we play poorly today,” he noted. “But, hey, we coached awful today. We obviously thought that we had them ready to play, but that was certainly far from the truth. So there's a lot of things that we can do to try to help our guys more in the future.”

I swear David had that energy today - too bad he missed those dunks. But I can tell he's hungry. I'd say keep feeding him like we did Doke. David has that energy, strength and power to go vertical, use him more. Marcus has got to just throw the ball when he's got a chance. Learn how to pass like Morant. Marcus is too slow. Way to slow to pass and has to develop court vision now or never. Ochai, Wilson, they seemed ready. Our 3s fell short. Either the kids played tight, tired or scared. Let them played freely. Let them played with no fear.

The Texas Trio - Ramey, Coleman, and Jones - slapped KU around and had some fun. Agbaji, Braun, and Garrett were stumped.