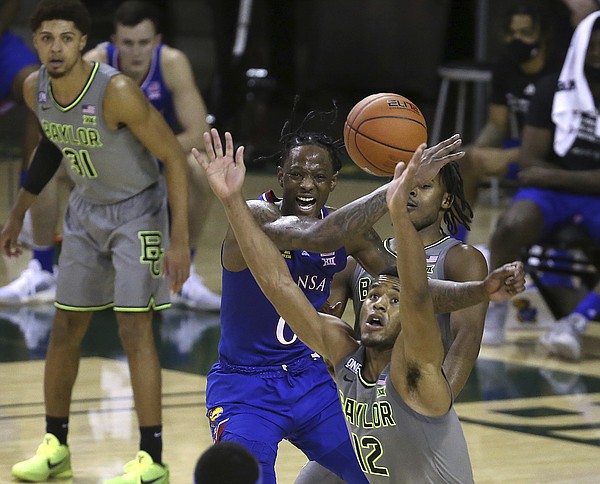 Marcus Garrett’s five-turnover effort in Kansas’ 77-69 loss at No. 2 Baylor on Monday was borderline historic and underscores an issue that has plagued the Jayhawks throughout the 2020-21 season.

What’s more, it marked the second game in a row inside Baylor’s Ferrell Center that the KU point guard has turned it over five times.

Prior to Monday night, Garrett had turned the ball over more than four times in a game just twice in his 114-game Kansas career.

Both of those games came last season, when Garrett gave it away five times in a win at Baylor and coughed it up six times in a road win at West Virginia.

Other than that, the Dallas native has been remarkably solid with the ball in his hands, committing two or fewer turnovers in 85% of his games as a Jayhawk and one or none in 68% of his outings.

Given those numbers, along with Garrett’s propensity to handle pressure of just about any kind from his freshman season on, we can draw two conclusions from the data.

The first, and perhaps most obvious, is that Garrett’s role has changed dramatically from his first three seasons to this one and that is impacting his play.

In each of his previous seasons, the Jayhawks had another true point guard on the floor with Garrett — Devonte’ Graham in 2017-18 and Devon Dotson in 2018-19 and 2019-20 — who both handled the ball and initiated the offense, leaving Garrett to attack and make plays for himself and others at the right time and against less resistance on both ends of the floor.

“He’s always been kind of Robin and somebody else was Batman,” Kansas coach Bill Self said on “Hawk Talk” Tuesday night. “And this year he’s Batman and really doesn’t have a Robin when you talk about ball handling. … If you’re going to handle the ball as much as him, you’re going to have two or three turnovers. You have to understand that. I think a lot of that is fatigue.”

The second conclusion is that Garrett might simply be playing out of position.

Self said as much last week while previewing KU’s upcoming game with Iowa State that wound up being postponed, and the fact that nearly 25% of Garrett’s career games with more than two turnovers have come this season illustrates the point, as well.

“We’ve talked about that a lot as a staff,” Self said. “Last year or the year before or the year before that, he was really a 3 guard that could play point. He didn't have the ball hawk guarding him and he had more space when he caught it, usually, because of the way people guarded or the way the other personnel matched up. This year, it just seems like he has to labor so much to get what he gets.”

Although he has praised Garrett’s point guard skills in the past, Self recently called Garrett “the prototypical 3 guard,” and noted that the new role has cut into some of Garrett’s effectiveness.

“We’re asking a lot of Marcus,” Self said. “I think Marcus is better when he's not on the ball so much, but we really don't have as many choices not to put him on the ball unless he and (freshman Dajuan Harris) are in the game together.”

Ninth-ranked Kansas (10-4 overall, 4-3 Big 12) has tried that at times this season, but only in small stretches and not even every game.

Harris remains a promising part of KU’s puzzle. And as he continues to improve, the opportunities will be there to play him with Garrett a little more often.

Until then, though — and most likely even after that — KU’s best chance at success continues to be with Marcus Garrett in the game.

if Garrett doesn't come back, and maybe even if he does, we need a true pg who can shoot. Problem is Harris is not enough of an offensive threat that teams don't drop off of him.

Thompson is a possibility, if he can stay healthy, but without pg and center improving it is hard to see this team a whole lot better next yearr.

Thompson is too sloooow and a so-so ball handler.

Um, Garrett is a senior. He's not coming back next year. He's graduating.

He can take the eligibility waiver the NCAA has extended for this season if he wants to return. As can Lightfoot. They're allowing for larger roster sizes as well so it won't impact the incoming freshmen.

Or rather, a senior who returns for an extra season won't count against the scholarship limits, I should say.

It's not even just a senior thing. This is a "free" year which means it doesn't count against any kid's eligibility. So Tyon for example will still have 2 years of eligibility remaining after this season even though he played 2 years of JuCo already.

Your next streak to end is weeks in the top 20. And then we can look forward to an NCAA probation.

But hey, that dorm has really helped the program.

Oh that's right! You're a Democrat, so you have TDS too! You truly are a sick, sick man.

It's the Top 25, not Top 20, and it likely won't end this year either. As much as this is a down year for us, we're still killing it relative to the other blue-bloods. Any of them would gladly trade seasons with us right now. We sure are spoiled when our down year has left us in the Top 10 all season.

The dorm is paid for, what's the point of tearing it down like you always say we should do? Also, you like to say it hasn't helped but you're not factoring in that it's one of the big reasons we've not had to cancel any games due to Covid as it allows the team to isolate away from the rest of the student body to avoid Covid exposure. So in that regard it's help us tremendously this year.

Can somebody please relay this to Marcus?

Marcus, you're 6'5'', do you know that Morant is shorter than you? If you don't like clip I sent earlier on Trae Young, here's on Morant:

I've been saying this, but you've got to be more bouncy, pound the ball harder, be more unpredictable with your moves. You need to fake more, bounce pass more, improve your interior passing.

Your dribble drive is so predictable, your layups are contested mostly, learn these moves: - euro step - swing step - veer step

You're not in high school anymore, yo! Dunk more, dunk dunk dunk, that's your mission when finishing to the rim. We don't have any options, coach has nobody but you. The only way to end this season with a bang is a better version of Marcus and his team. Let's go Marc!!!!

You realize Ja Morant is an outlier and exception, with rare leaping abilities?

I didn't expect Marc to be just as good as Ja, but I expect Marc to improve. Heck... I can't be as good as Marc, but watching youtubes, practice outside, at home, I'm a much better player now than before. It took me 2-3 weeks to be able to shoot 3s pretty consistently. Trust me, watching is inspiring, and when he's inspired he'll be more motivated to get better. He's got coaches, right?

The coaching staff knew that Devon Dotson was not willing to return, under any circumstance - and did not manage to bring in a replacement point guard. Pathetic!

I think ideally, Issac McBride would have been that person but your point stands. I also think today's game more than ever before your lead ballhandler needs to be a shooting threat. I love Garrett and he's made big strides in his motion and in-game shooting, but it's not the same.

Free Marcus! (from point guard duties, that is)

Move Christian Braun to PG and tell him to study film of Luka Doncic!

Or give Jossell a shot at PG, along with Harris (our two smurfs in tandem).

Marcus is still 8th in assists and second in A/TO in the conference. The only player with a better ratio has fewer A. Every player with more A also has a proportionally higher ratio.

Marcus will continue to improve as virtually every Jayhawk has done under Coach Self. Guessing he’s digging into those outlier TO games.