Kansas basketball coach Bill Self on his team's defense: 'We've got to get back to guarding' 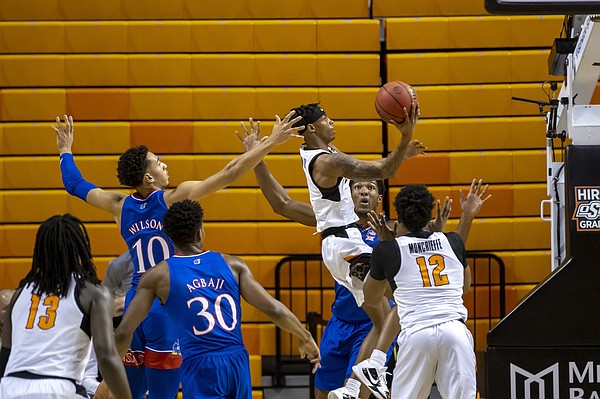 But after watching Oklahoma State carve up KU’s D and hit KU for 37 points in transition during Tuesday night’s loss in Stillwater, Okla., Self believes it’s time for his current team to grab a better understanding of what playing great defense actually means.

Self pointed out that most years he and his coaching staff would not even have to point out a breakdown like that. For the past two decades, most of Self’s teams have featured several players who made defense a priority and measured the team’s success under that microscope.

“It has been for years, that (when guys) look at a stat sheet from the game, the players don’t turn to see who scored, they turn to see how many the guy they guarded got,” Self said on “Hawk Talk.” “I mean that’s kind of been the mindset.”

Self admitted that things are different today than they have been in the past, primarily with defenses designed to switch so often and run different schemes based on that. But he said he still would like to see his players take some more pride in getting stops.

“They had 25 points with 12 minutes left in the first half,” he said of Oklahoma State on Tuesday night. “And I said, ‘Guys, they're on pace for 125.’ And there wasn't that pride of saying, ‘All right, OK, enough's enough.’ We’ve got to get better at that.”

One of the big reasons Self is starting to emphasize his team having more pride on the defensive end is because he believes they have enough weapons on offense to get what they need to get even on off nights.

But he noted that this Kansas team does not have the margin for error not to be good on the defensive end.

“We didn't guard Texas (on Jan. 2), but they played at an athletic level that was superior to us that day, that even if we would have guarded them a little bit better, it may not have been enough. That wasn’t the case the other night.

“You can’t play nine minutes hoping the other team doesn’t score,” Self added.

Asked by Hanni to ID some of the players who took their studying of the postgame stat sheet the most to heart, Self listed Brandon Rush, Travis Releford, Tyshawn Taylor, Udoka Azubuike and Frank Mason III, while saying there were several others, as well.

“Every team that we’ve had that’s been good had a guy that was a stopper,” he said. “But it’s also a team thing. The guys have to buy in if you want to be a great team. The great teams all buy into being able to identify who they are and the roles and the strengths and the weaknesses of the individual players and the team.”

Like always, Self wants this team’s identity to be tied to its play on the defensive end. And he appears to be poised to emphasize that to his players more than he has thus far in the coming days and weeks.

“You keep yourself in games and you win close games because you guard,” Self said. “That wasn’t the case the other night. We didn’t guard.”

Self said on “Hawk Talk” that that point was hammered home to him during a Thursday phone conversation with a longtime female coach at a major Division I program.

“She said, ‘Bill, I watched you guys play early in the season and you weren't very good offensively but you guarded. Now, you're not guarding,’” Self relayed. “Coming from another coach, that's actually kind of tough to hear. But that’s the fact. We’ve got to get back to guarding.”

To save the season, Enaruna Should start vs Braun, and Self should move to zone defense. Current team not quick enough to defend as needed.

Agreed, but that won't prevent the other team from scoring fastbreak points, which are mostly caused by TOs (intercepted passes).

That is a tough call between Enaruna and Braun. If Enaruna was less prone to careless turnovers, I would have no problem with that but at this point, it's kind of a wash. The defensive mindset of this squad seems very lacking, no real instinctive defensive studs. Evan Marcus seems out of sync on the defensive end. They just seem to be lost, getting routinely burned giving up transition buckets and having a horrible time keeping their man in sight or playing recovery defense getting back to who they are supposed to be covering. Never quite understood why Bill's defenses seemed to really rely heavily on players cheating off their man to help everyone else out. The reaction time to get back to their man seems to always be way too late, giving up a lot of uncontested shots. I'll admit I am a spoiled Jayhawk fan and I know that we will not always have the same stable of horses every year, but man it still gets under the skin!

Here coach, have you guys sprint up & down the court, record their speed, you'll probably get good numbers from guys like TGF, LJ, maybe Agbaji. That's about it. Your 5 starters are not that quick. What do you expect? I remember Shanon G educated me on twitch muscle, something some athletes that are born with, can't be trained (but can be found within the team).

So, if you want to have a team that have capability to get back on guarding, especially from those mounting TOs your plays create, first you need to recruit the right guys; e.g. Josh J, Mason, Chalmers, Russ, Svi, Releford, Dotson guys who can really run with and without ball. You need to pick the taller ones, though.

But with your kind of plays, you probably don't need those 'run n gun' players. Will those players look to consider getting in your program? Probably not, until you change your offense style. No offense, but that's just a reality. Who wants to be in a program where they'll just have to settle on offense with the weaving where the ball eventually end up in low-post? The rest will be just watching or shoot 3s? We can still win lots of games if we have the right players (guys who can post & those who can shoot 3s).

He's got a couple guys who've committed recently that are crazy athletes, namely Cuffe Jr. and Curry. TGF is obviously a great athlete but he's not shown the ability to be mentally ready to play yet. Good thing this year is a freebie and he'll have 2 more to figure it out after this season.

Can't wait!!! getting committment from Kendall would've been super. Alas, KU saw him only as a defender:

“They say that I’m a very versatile player with my size and ball handling skills and that I can be an elite defender with my length,” said Brown. “They’ve said that they really like my defense and I can make a living off of it.”

The reason I bring this up is that last season's team really had a shot at the NC. I mean they really did. The aforementioned stat indicates that teams that go all the way, overwhelmingly, fail to match that zenith right away, indicating that, to the 20 or so teams every year who have a legit shot, the odds are not good to win and repeat.

Losing Devonte, Dok and Silvio will be an obstacle that KU will probably not be able to overcome this season. Thus, KU is at the beginning bottom of the Bell Curve for any National Championship.

Heck, we not even be the in the top four of the conference. Still, we'll win a bunch of games, continue our NCAA streak and reload for next year. There's a lot of youth and talent on this team and we got Zach and KJ coming next season, so stop and smell the sunflowers and enjoy the ride this year. :].

Nice sum, Tony. But why did you even mention Silvio? :)

Our basketball program will never be healed until we get rid of the person who has degraded it.

The absolute best outcome for KU basketball is a mid-league finish and a significant NCAA punishment. This would give Major Milktoast, Not Here Long and Dollar Bill all the cover they need to do the right thing.

This is a Free State University. Founded by people with principles. Let’s revisit that mission.

And destroy that idiotic dorm. Or give it to financially strapped students who actually care about their college degrees.