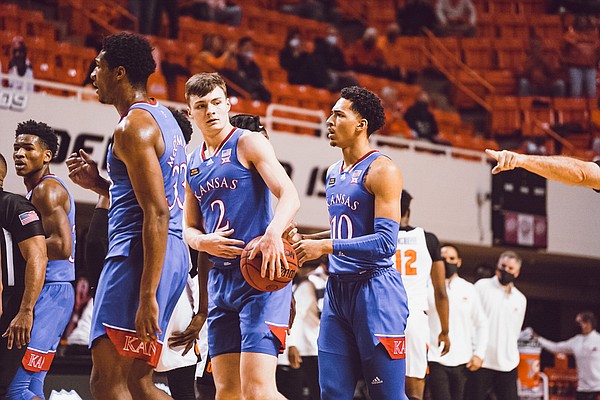 Given the way he started the season, exploding onto the college basketball scene as one of the country’s top breakout players, Jalen Wilson’s past two games have not exactly lived up to the standard he set for himself.

In a close-call KU win over Oklahoma at home last weekend and Tuesday night’s loss at Oklahoma State, Wilson scored a total of 13 points on 4-of-11 shooting — including 2-of-7 from 3-point range — and turned it over 10 times while playing his usual workload of around 30 minutes per game.

There’s probably nothing to panic about here. Sometimes a guy’s shot just doesn’t fall. Wilson got four pretty good looks from 3-point range on Tuesday night and missed them all in a variety of ways.

But off shooting nights plague just about every player at one point or another. And, maybe, after a red hot start, Wilson is simply coming back to the pack a little.

The 10 combined turnovers is the more surprising of Wilson’s statistics during the past couple of games, when he just hasn’t quite looked like himself.

Wilson turned it over just 11 times total in KU’s first seven games of the season. And he coughed it up just four times in the three games leading up to the past two outings.

All of the things we’ve seen from the talented freshman during the past two games — from the moments of frustration to the missed shots and uncharacteristic turnovers — led me to wonder if something had changed for Wilson between now and his hot start.

Were teams defending him different? Was he not getting the same looks or being as aggressive when they came?

In order to try to find out, I went back and rewatched Tuesday’s loss and focused my eyes on Wilson the entire time. What I saw surprised me.

Except for just a couple of times when he looked a little hesitant to pull the trigger from the outside — OSU freshman Cade Cunningham may have had something to do with that — Wilson looked pretty much like the same player he has been all season.

He hit the glass, competed, looked to attack off the dribble and tried to play smart, winning basketball, reversing the ball when needed, feeding the post when required, etc.

While that’s good news for Kansas, the rewatch did not answer the question of what might have caused Wilson to look a little different during the past two games than he did during his first 11.

Remember, we’re talking about a guy — a freshman — who already has three 20-point games on his resume this season, who also recorded three double-doubles in a four-game stretch against Kentucky, North Dakota State and Creighton.

His averages during those three games? 20 points, 12 rebounds and 14 shots.

Any time a player riding that kind of streak quietly puts up 11 total shots in a two-game stretch, it’s going to catch your eye.

If anything changed — other than makes turning into misses more often — it was probably KU’s approach on offense.

It’s no coincidence that Wilson’s two quiet outings came while junior forward David McCormack enjoyed two of his best games of the season.

Rather than leaning on Wilson and others to score from the outside, the Jayhawks pounded it inside to McCormack over and over during the past two games, hoping to take advantage of his hot hand and clear size advantage against the Sooners and Cowboys.

It worked. And McCormack combined for 41 points on 18-of-32 shooting.

Wilson salvaged the OU game with a couple of huge 3-pointers late and 11 rebounds. He was not as fortunate in the OSU loss. But, for the most part, he did take the shots when they were there and he threw it into McCormack when that was the smarter play.

I wondered for a minute if it was OSU’s zone that caused Wilson some discomfort. But he worked pretty well from the high post, and one of his better plays of the night came when he caught a soft pass at the free throw line and immediately turned and drained a quick shot for two points. No thinking. No hesitation. No stress. Just an athlete making a quick play.

That was different from how Wilson looked when he shot the 3 against Oklahoma State. On most, if not all, of his 3-point tries against the Cowboys, Wilson looked more like he was thinking about shooting rather than catching it and letting it fly in rhythm and with confidence.

Had just two of Wilson’s four 3-point tries fallen instead of bouncing out, KU very well may have won the game and Wilson would have added another double-digit scoring night to his game log. So it’s not as if this is some kind of major situation that’s developing.

It might take some time for Good Jalen and Good Dave to figure out how to play well at the same time, but, provided they do, the Jayhawks will be better off in the long run with both of them having the experience of carrying the load offensively.

The bigger thing to watch is Wilson’s mindset. As long as he keeps hitting the glass and defending — his work as a team defender on Tuesday night was far superior to that of his individual defense and he, like many of his teammates needs to be better as a transition defender — he’ll continue to be out there.

He was on the bench for the 6- or 7-minute stretch of the OSU game when KU stormed back from down 16 to take a 3-point lead in the final 10 minutes. But that probably had as much to do with what Bryce Thompson and Tristan Enaruna were doing as it did what Wilson wasn’t.

More and better energy is always going to be the answer for any player in a slump, even one as small as the one Wilson’s in right now.

And bringing it consistently in that department might lead to easier baskets on a couple of possessions or better overall feel and rhythm when he does decide to let his jumper fly.

The smart money is on Wilson delivering a strong bounce-back game in the very near future, perhaps as soon as Saturday versus Iowa State or on Big Monday at No. 2 Baylor.

Now that he has established himself as one of KU’s top players and go-to scorers, he’s going to get that kind of attention from opposing defenses.

But as long as he’s willing to work through the time it takes to adjust to that, which appears to be what’s happening now, the expectations for Wilson to continue as one of KU’s top players and most reliable weapons should remain right where they are.

Nice observation, Matt. So, if they are asked to give up the ball to low-post, what's the chance of him getting more productive offensively? What's the alternative, other than standing at the perimeter? His TOs are enormous in the past few games, too. Not sure if that's a coincidence with pounding the ball inside.

Wilson is not rebounding as aggressively as he was earlier. You can always rebound even though your shot isn't falling. When he gets back to being aggressive on the glass at both ends of the court the game will come to him and he'll be contributing even if he's not scoring.

That kinda explains Wilson, but why has Braun been stinking up the court the last couple of games?

It's hard to get a rhythm when a shooter is just standing waiting for a ball to come, unless unguarded - that's my observation. If he moves around a little bit, he might score more. He seems frustrated. That's the challenge coach needs to resolve, how to get these high-scoring sharp shooters to be more productive. Design plays for them, not just focusing on high-low offense, kick out. Players need to move around to get open.

RE: Wilson, There was a flash of the high low going on with Garrett at the top, that doesn't work super well, but Wilson would be perfect for this option in the O - he has the size, the feel, the shot and the passing to do that more often.... just a thought. I am not a big fan of constantly running the high low - but it was a cool flash that could be an option in the offence and get him going possibly with a shot from the free throw line to get him in rhythm during the game.

I'm challenging kusports.com, to create a poll to the Jayhawk Nation & fans - re: who's a big fan of constant high-low offense. I'm pretty darn sure, Chris, the majority is not a big fan of this style.

Steve, I agree, but the offense options have been pretty stale (for years actually) and running a high/low option flash just at the top of the key, when opposing teams are pushing the guards further our past the 3 point line in the "weave" a called play or two there with a 10 - 12 jump shooter threat or possible pass will force the opposing defense to stay honest.

Just throwing ideas out there and thinking about getting someone an easy touch to get them going, especially when it seems we do not have players this year with that "quick twitch" speed and getting covered up on the parameter and driving the offense to start further out and causing higher risk passing.