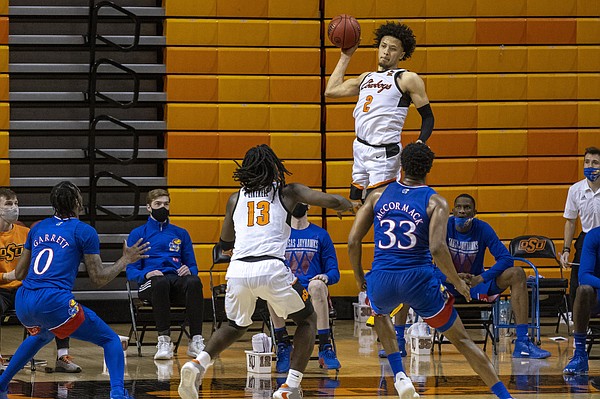 Oklahoma State's Cade Cunningham (2) passes the ball during the second half of the NCAA college basketball game against Kansas in Stillwater, Okla., Tuesday, Jan. 12, 2021. (AP Photo/Mitch Alcala) by Associated Press

Even after Oklahoma State tied the game with a late and somewhat unlikely 3-pointer by junior guard Isaac Likekele on Tuesday night, Kansas coach Bill Self believed his team was in prime position to win.

The fact that they didn’t, and instead came home with a 75-70 loss, was the result of several things going wrong down the stretch for the sixth-ranked Jayhawks.

Self talked about many of them in his postgame press conference and the one thing he kept coming back to was an old buzz word that has been a cornerstone of Bill Self basketball for the past 28 seasons.

“We’ve got to play tougher,” Self said after the loss. “And that's my honest opinion. We don’t make other people play poorly; we hope they play poorly. And that’s not the way to live in this league.”

Tougher does not mean more physical.

Tougher does not mean harder.

Overall, Self has been pleased with how his team has performed this season in those two areas.

Tougher, in this case, means with a stronger mind, both from the standpoint of imposing one’s will on the opponent and in making the right plays in key moments.

Self pointed to two such plays from Tuesday night that did not outright cost Kansas the game but certainly contributed to the loss.

The first came after a missed 3-pointer by junior guard Ochai Agbaji in the final 20 seconds, with Kansas down three.

After grabbing his own miss at the top of the key with just over 8 seconds to play, Agbaji immediately launched a second shot toward the rim with OSU freshman Cade Cunningham challenging it.

Replay shows that if Agbaji had pump faked and taken even a dribble or two to get himself in rhythm, he would have been all alone for the potential game-tying 3-pointer.

“Ochai rushed his second 3 when he had all the time in the world,” Self said after the game.

Agbaji agreed and regretted the rush.

“I kind of floated that up there thinking I had less time on the clock,” Agbaji said. “I didn’t look, but I know I could’ve set my feet and actually got a better second shot off.”

That Kansas needed a 3-pointer to tie in the first place was the result of a transition foul by sophomore Tristan Enaruna on Rondel Walker, who finished off a play that started with a Cunningham block and save with an old-fashioned 3-point play to put the Cowboys up three with 17 seconds to play.

“You can't give up an and-one at game point,” Self lamented. “If that's a two-point game instead of a three-point game, it has a totally different feel to it.”

“There's just some things like that that we can get better at,” Self added. “We (probably) haven't been in that position enough to be great at it. But we’ve got to get better at it.”

Those late examples were just two of the smaller mistakes that Kansas made on a night that featured bigger problems throughout the game.

KU’s transition defense and ball security was the poorest it has been all season. The Jayhawks again struggled from the 3-point line on offense, making just 5 of 21 from behind the arc, with four of the makes belonging to Agbaji. And KU also swiped just three steals, compared to nine by Oklahoma State.

Bad moments happen in every game. And teams are going to make and take runs throughout the season.

But the part that seemed to bother Self the most after Tuesday’s loss was that, after a 21-2 run gave them a chance to win, the Jayhawks gave it away with a couple of crucial mental lapses late.

Rather than pointing the finger directly at his players for that, Self said eliminating those things starts with him.

“That's on me more than the players,” he said. “I’ve got to get the guys where we think a little tougher. Pride and toughness is a big part of stopping people. And we’ve got to get better. I’ve got to demand more.”

KU's next crack at correcting some of its issues comes at 1 p.m. Saturday, when Iowa State visits Allen Fieldhouse.

So, can we all admit that Garrett playing point guard is terrible for him, AND the team?

Garrett is a stud off-ball, if he's not off-ball, quite frankly he shouldn't be in the game. When he's running the point the ball sticks/turnovers/blocked shots driving into bigs repeatedly. Off-ball it seems like we get better ball movement, which ironically actually puts Garrett in a better position to get to the rim on a slash and not get stuffed by 3 guys.

Love Garrett, hate to see him be relegated to a position he can't play similar to EJ his senior season. But even EJ was still far better suited to play PG than this. We have other options that while they may make mistakes, are still an upgrade at the 1PG spot.

Just my .02 cents, i'm sure Self will work his magic to right the ship as he always does.

He's been terribly inefficient this season and we play better with Harris at the point, that's for sure. The advanced stats show this is the case by a huge margin. Unfortunately the extra energy he spends at the point seems to negatively effect what he can do defensively as well.

I was confused by how the last play went. Coach Self is masterful at drawing up plays out of time outs, but it seemed that Braun curled into traffic instead of to an opening and Wilson led multiple defenders to him. Maybe the ball was under thrown but the area seemed more overcrowded to me. (I fully recognize there’s a reason he’s a millionaire and I’m just watching.)

Ditto! Same observation from my end. I wish Matt or Jesse brought that up in the post-game interview. Usually coach wants player to curl away from the basket initially, use the crowded area just to get back towards the basket for a 2 or lob, not what you mentioned for a 3. It's a guarantee - a contested 3 shot.

I watched it multiple times trying to figure out what they were trying to do as I had the same observation that Braun seemed to curl to the wing when he should have went to the top of the key.

He's not that bad. Garrett needs to assess the court, knows where everybody is, not sure if you can teach court vision, that and being able to pass a good pass, be it bouce pass, lob pass, wrapped around pass, no-look pass; which makes a very strong case, Garrett is not a PG. He's a great defender, not too sure on offense, perhaps he fits a wing?

If coach still insists on using him as PG, coach should groom him, hire a personal NBA- trainer, or at least equip him with training:

I'm sure coach BS realize how important a PG is in basketball. He'd better prepare Garrett more - time is running out. Or replace him with Harris. I have a bad feeling about KJ Adams, too.. his style is similar to MG's.