A look at how all 5 Jayhawks on the floor made David McCormack's game-sealing jumper possible Saturday vs. Oklahoma 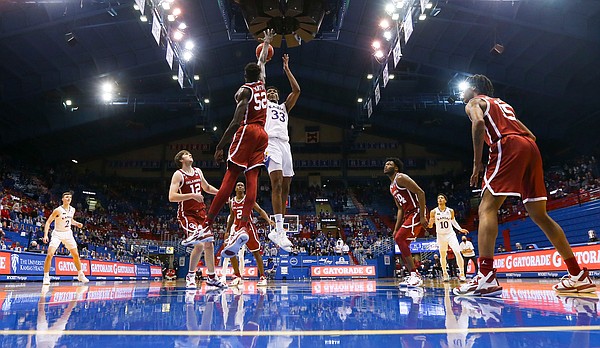 College basketball games are 40 minutes long and, with very few exceptions, are rarely played to perfection.

Misreads, missteps and missed assignments are a part of every game and they often determine the outcome.

Every once in a while, within those imperfect games, there exist possessions that are executed to near perfection.

The sixth-ranked Jayhawks delivered one of those with the game on the line on Saturday and the result helped them survive a scare from Oklahoma at Allen Fieldhouse.

Here’s a look back at that possession, which ended with a David McCormack jumper that put Kansas up four, along with a quick breakdown of what every player did right during what wound up being the game-clinching sequence.

First, a look at the possession.

Since senior point guard Marcus Garrett starts with the ball, we’ll start with him.

Clearly in control of the game and keenly aware of what Kansas coach Bill Self wants his team to run, Garrett quickly gets the ball to the side of the floor where the Jayhawks want to start their action, takes a look at McCormack on the slip screen and then reverses the ball to Jalen Wilson, who was hoping to find an angle to get to the rim.

It’s during this reversal when the one mistake is made.

As the ball is reversed, McCormack has a golden opportunity to seal his man on his back, leaving the lane wide open for an easy entry pass from Wilson and a likely dunk.

But contact is never made, OU’s Kur Kuath does a great job of recovering over the top of McCormack and the opportunity never really presents itself.

As that’s happening, Wilson wastes no time in attacking, dribbles hard to his left and appears to be setting up a crossover back to the right that could get him to the rim or at least to the free throw line.

OU defender Elijah Harkless does a great job of sliding his feet and his body to stay in front of Wilson both ways, though, cutting off Wilson’s options. Kuath getting over the top of McCormack also crowds the paint, making Wilson’s drive to the rim tougher and less appealing.

Instead of forcing up a bad shot, Wilson makes the right play and skips a pass to Christian Braun in the corner.

At the time the pass was thrown in real time, I thought it was the perfect setup for a 3-point shot for Braun from the corner.

But OU guard Austin Reaves’ close-out, and possibly Braun’s cold shooting (he was 1-of-6 from 3-point range on Saturday), cooerced the KU sophomore to flash some patience instead of jacking up the shot.

Before Braun even caught the pass, he likely noticed that McCormack was still down there on the block providing an easy target to throw the ball into. Kuath’s hustle to get over the top of McCormack on the initial action put him squarely on McCormack’s back at this point, and the KU big man did a great job of making contact and making himself available.

With the shot clock down to 6 seconds, Braun saw him and immediately threw it inside.

From that point on, it was all McCormack, who noted after the game that he knew OU had help coming from the weakside (Reaves) so he instinctively worked to the middle to find a shot.

It’s worth watching what Wilson, Braun, Garrett and Ochai Agbaji all do after McCormack begins to make his move. That adds to the execution that made this play stand out.

As soon as he made the pass to Braun, Wilson vacated the paint and faded to the 3-point line. You can see him hopping up and down asking for the ball as McCormack gets into his move.

At that point, with Wilson already having hit two 3s in the the final few minutes, a quick pass there would not have been a bad play at all.

After making the pass, Braun relocates to the 3-point line on the wing, both making himself available for a pass and trying to bring his man away from McCormack. The move provides KU with one more advantage, though. By doing it, Braun also is already well on his way to getting back on defense, where, if McCormack had missed, KU would have had to seal the game with a stop.

Not surprisingly, getting back on D is what Garrett’s focus appears to be on throughout the final few seconds of the possession, as well.

Finally, there’s Agbaji, who ran to the corner opposite of McCormack and stayed there. Until the end.

As soon as McCormack picks up his lone dribble and gathers to go up for a shot, Agbaji darts to the rim and slips in behind OU guard Alondes Williams. There’s no telling where the shot might have come off had it missed, but Agbaji put himself in excellent position for a tip-in simply by playing smart basketball and executing what the KU coaching staff has no doubt emphasized hundreds of times since Agbaji has been here.

New England Patriots coach Bill Belichick became known for his “Do your job” approach to winning football games and the five Jayhawks on the floor in crunch time against the Sooners did exactly that to help Kansas snag the victory.

McCormack got a lot of the credit for hitting the shot. And it was a tough, clutch shot. So he should receive plenty of praise. But this one play, if watched a few times over, provides a great look at how much goes into having success on any given possession.

Thanks for the great analysis, Matt. It's always nice to understand all the little details that go into making a play successful.

Check out my music at LenShaffer.Bandcamp.com.

Pretty standard stuff. Slip screen from the high post to low, Feed to the corner shooter and pass to the low post. McCormack's execution of the shot, spinning to the lane and avoiding the trailing defender trying to knock the ball out of his hands, was exceptional, His improvement in the low post has been great to see.

Definitely standard stuff, but not everybody always sees it, especially the casual fans. Let the people have some fun, Brad!!! ;-)

It will be interesting to see if McCormack can keep trending in a positive direction. The answer to that question may very well determine how successful this team can be.

Great analysis, Matt. Yep, couldn't agree more with the progress. At least there's no 'moving picks' now that he's slipping from the high screen fake. Good to see that play. But you also see in the clip, David doesn't stay on the ground low at 'low'-post, he gets pushed out easily. If he can make the fall-away jumper/hook, great, but that's a 50-50. I'd like to see him getting deeper, spinning to the left, closer to the basket, by extending his left leg further down. I've seen him doing the spin move, drop step kind of play before. But it's very very rare. It's a powerful move. If he can do it quickly. I think in one of his plays where he got fouled getting up, too bad he didn't score and-1. Nevertheless, there's still lot of rooms for his improvement.

Saw the mistake there, never mind.

Very cool analysis of this play. Thank you Matt!... More of these types of articles for us junkies. Lol