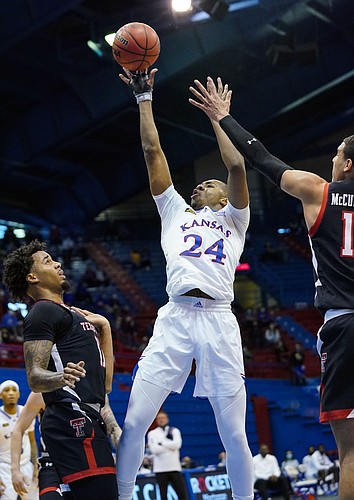 Kansas coach Bill Self said Monday during his regularly scheduled press conference that the Jayhawks are still debating whether to add another opponent next week during the team’s 11-day layoff between Saturday’s regular season finale against Baylor and the start of the Big 12 tournament.

“We’re considering that,” Self said. “But in order to do that, we have to get on it immediately.”

Any opponent KU would add to the schedule would have to meet certain COVID-19 protocols to even make the game possible. The Jayhawks have an open date because of the cancellation of the Tarleton State game in mid-December.

Self has said throughout the past week that he would like to play to keep some of the rust off but that he also would rather be rusty than risk COVID-19 complications.

As for the ideal date for KU’s 27th game of the season, if it does happen, Self pointed to Thursday, March 4 because, “that would be kind of halfway between when we last played and when the (Big 12) tournament's starting and would give us plenty of time to rest and to prepare.”

“Nothing’s been decided yet,” Self added.

After playing with a protective glove on his right hand during his first few games back from a broken finger, Bryce Thompson plans to ditch the glove this week as he climbs closer to 100%.

“He’s getting better all the time,” Self said Monday afternoon. “He practiced without his glove for the first time (Sunday) and says he feels good.”

Although nearly everyone in the lineup has played a significant role in KU’s five-game winning streak, Thompson’s return has given the Jayhawks an added weapon off the bench. In addition to providing Self with another competitive player who thinks team-first when he’s on the floor, Thompson has provided KU with another option to lighten Marcus Garrett’s load as the team’s primary ball handler.

The Jayhawks are 12-2 in the games Thompson has played in this season and just 5-5 with him in street clothes.

“When we didn’t play well and we needed a pick-me-up, we didn't have our pick-me-up because Bryce was hurt,” Self said. “So I do think he's very important to us, and I think he's going to continue to get more and more confident and better as we finish the season.”

Garrett a finalist for national award

On Monday, senior guard Marcus Garrett was named one of 10 finalists for college basketball's Senior CLASS Award, given annually to a men's and women's player who excels both on and off the floor.

Garrett was chosen by a selection committee that selected the finalists from a list of 30 men’s candidates announced earlier in the season. Nationwide fan voting begins immediately at the Senior CLASS website, and the fan vote will be combined with votes from media members and Division I head coaches to determine a winner.

This year's male and female honorees will receive their awards at the 2021 Final Four in Indianapolis.

Kansas coach Bill Self on what he expects in rematch with Texas by KUsports.com

Christian Braun on mindset of Jayhawks after winning five consecutive games by KUsports.com

The voting link lets you vote as many times as you want. After voting you click "Return" and you can vote again. Looks like some people voted many times, looking at the number of votes some have received already. Fan voting (popularity and school-ism) should be eliminated from these awards.

No, please don't add a game. Don't risk injuring a key player before the postseason. It's not worth it.

An exhibition game against a state school just like usually happens at the beginning of the year would be great. Just enough to be loose but minutes for everyone.