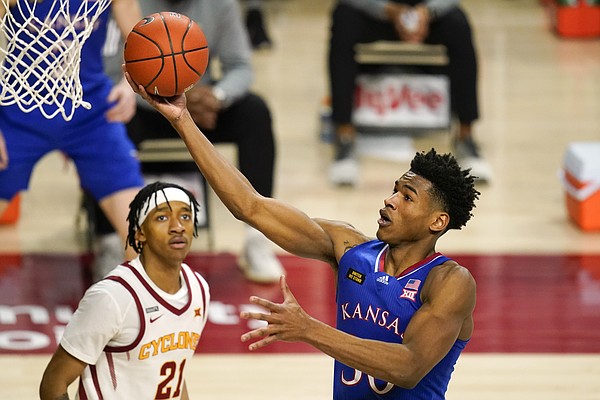 The Kansas men’s basketball team did what it needed to do this week to position itself to get fully back on track before the postseason arrives.

Three wins in six days — one against a ranked team — helped the Jayhawks move on from the rough stretch they hit in January.

Now, Bill Self’s squad is looking at the final two weeks of the regular season with a little different point of view.

So what’s next for this Kansas team? That’s easy, according to Self.

After that, the Jayhawks will kick off one of the toughest sprints to the finish in recent memory, with three straight games against Top 15 teams to close out the regular season.

The first comes Saturday, against Texas Tech at home. After that, KU will travel to Texas for a Feb. 23 rematch with the Longhorns, who drubbed the Jayhawks by 25 in Allen Fieldhouse on Jan. 2 to kickstart their rough month. And then it’s back home for a clash with No. 2 Baylor on Feb. 27 to close out the regular season.

“You can obviously have momentum going in the wrong direction, which we had last month,” Self said. “So we’ve got to curtail that, but we’ve got to extend this (momentum that we have now). So hopefully we can keep doing that.”

One of the focal points for the final two weeks of the regular season — other than trying to keep their positive momentum going — will be the Jayhawks’ playing for seeding, both in the conference tournament and the NCAA Tournament.

Self and his players have talked openly about their desire to chase down a second-place finish in the Big 12, which is still within reach but won’t happen without at least a couple more wins.

Although the team hasn’t talked much about it, there’s also another streak on the line in the next month.

No Kansas team in the Self era has been seeded lower than fourth in the NCAA Tournament. If they finish strong, this team won’t become the first. If they don’t, it’s entirely possible that they will. The current Bracketology projections at ESPN.com have Kansas as a No. 5 seed.

None of that stuff matters as much to Self and his players as the opportunity to play well and get rolling for the most important time of the season. So that’s where their focus lies.

“We’ve got three ranked teams and our in-state rival left on the road,” Self said. “So that right there should be motivation (enough), four games the guys should be excited to play without question. It'd be nice to have as much momentum as we can going into the Big 12 tournament and postseason, but I don't dislike where we're at. I really don't.”

Neither do the players, who all continue to talk about having the right mindset going into the homestretch.

"We have to maintain our positivity," junior forward David McCormack said. "Maintain encouraging each other and just stay positive through the troubling times. Now that we're into the positive stuff that we want to be, we just have to make sure that we reinforce that positivity."

Added redshirt freshman Jalen Wilson: "We're focused now. We're ready for this (next) stretch and for last few games of the Big 12, so we're focused and prepared for anything."