Kansas basketball a part of the blue blood blues, but Jayhawks' resume still looks better than most 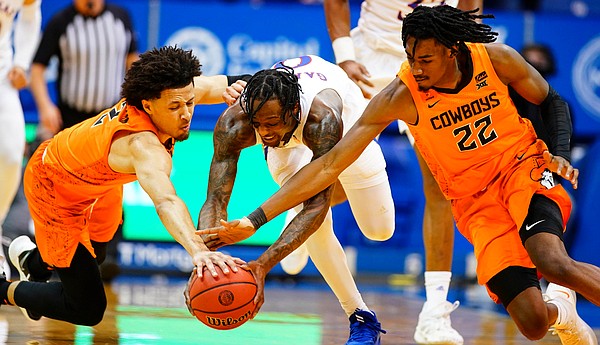 Kansas guard Marcus Garrett (0) competes for a ball with Oklahoma State forward Kalib Boone (22) after stripping it from Oklahoma State guard Cade Cunningham, left, during the second half on Monday, Feb. 8, 2021 at Allen Fieldhouse. by Nick Krug

KU’s 12-point win over Oklahoma State on Monday night was big for the Jayhawks’ psyche and confidence.

But it also did wonders for those people — fans and critics alike — who have refused to write off this Kansas team.

At 13-7, with six games to play in the regular season, the Jayhawks sit a far cry from where many are used to seeing them.

Unranked. Uncertain about who they are. And unsure about what the future will bring, be it the madness of March or the next half of basketball they play. This team continues to move forward as one of the greatest mysteries of the Bill Self era.

As individuals, the Jayhawks have shown they have enough to produce quality performances on any given night. We saw that right out of the gate, when the Jayhawks had four different leading scorers in their first four games and their overall leading scorer at that point (Ochai Agbaji) was not one of them.

But it’s been their ability as a team — the sum struggling to be greater than the value of its parts — that has plagued the Jayhawks during the Big 12 season.

The Jayhawks have had very few halves, let alone entire games, where their lineup has been clicking all at once, and that has led to seven losses and even more questions.

The Jayhawks have been roasted by many as a team that just doesn’t have it. Others keep waiting to see what might they might become.

But regardless of which side of the fence you’re standing on, it’s important to note that this team deserves at least a little credit for what it has accomplished. Thirteen wins while playing the nation’s fourth toughest schedule — per the NET — is nothing to scoff at. And five of those wins have come against ranked teams.

Self has started to point that out in recent days.

“Of our seven losses, all of them have been ranked,” Self said following KU’s 78-66 win over No. 23 Oklahoma State on Monday night. “It's been a hard schedule, without question.”

As difficult as this season has been, the Kansas coach has not leaned too hard on that fact as an excuse for the way his guys have played or as the reason why they lost. After last Saturday’s loss at West Virginia, which was ranked No. 17 at the time and is up to No. 13 in this week’s poll, Self said in no uncertain terms that he was not leaving Morgantown with the idea that what transpired should in any way be considered “a good loss.”

But perspective is important. And the Kansas coach both appears to have it and be sharing it with his players.

“There’s a lot of teams that are ranked in the top 20 that would have our record if they had played our schedule,” Self said after the WVU game. “We’ve played a monster schedule.”

You’ve all seen the struggles of other blue blood programs around the country this season. Duke, Carolina, Kentucky and Michigan State are all having down seasons by their lofty standards.

But to understand better what this KU team has done, take a look at the records of those other perennial powers and the strength of schedule mark associated with them, according to KenPom.com, which ranks KU's schedule as the eighth toughest to date.

Beyond that, KU has five wins against Top 25 opponents this season. And it's that total, along with the tough schedule, that inspired ESPN's Jay Bilas to rank KU as the 24th best team in the country this week, despite their recent rough stretch and status as an unranked team.

And then there's this, from ESPN's John Gasaway, during a recent edition of his Bubble Watch.

Maybe the "down" year we're seeing from Kansas isn't so very apocalyptic after all. Yes, the Jayhawks fell out of the AP Top 25 for the first time since 2009. Yes, the visual contrast between this group and last year's juggernaut and presumptive No. 1 seed is unmistakable. Still, we've seen KU outscore the Big 12 by about this same per-possession margin before. The difference between now and 2019-20, however, is that Kansas is getting fewer wins out of that scoring margin than before. Coming up short on the bottom line means that, for now, the Jayhawks are seen as a No. 6 seed.

These types of seasons happen, of course. But rarely, if ever, have we seen them happen to all of these programs at the same time.

I’m not sure that does much for KU , but from a misery-loves-company point of view, it does seem to illustrate that KU’s season, though sub-par in many ways, has not been the train wreck that many have painted it to be.

Believe it or not, KU’s schedule won’t get any easier, either. That, of course is nothing new in Lawrence, where the Jayhawks routinely strive to take on the nation’s toughest schedule and have done so five times in Self’s first 17 seasons.

Several other seasons have featured a strength of schedule number in the top five or top 10.

Self always prefers that, even if sometimes it backfires, because he believes those types of games, especially early prepare his teams for both Big 12 play and the postseason.

Whether that proves to be true this season remains to be seen. The early run of games against Gonzaga, Kentucky and Creighton did KU some good at the time, but we probably won’t know how ready this team is for a postseason run until it gets there.

And it’s possible that winning some of those games and opening the season with an 8-1 record provided a false sense of security for the Jayhawks. Whether that’s true or not hardly matters now because what’s done is done and the only games that matter are the ones that are ahead.

Three of those come in the next week against teams that have struggled this season — Thursday vs. Iowa State, Saturday at Iowa State and Feb. 17 at Kansas State.

“I think it's probably the two biggest games on our schedule thus far, without question,” Self said of the upcoming back-to-back battle with the Cyclones.

There are many reasons Self feels this way, but building confidence and momentum and positioning themselves for a strong finish are at the top of the list.

After that, it’s games against No. 7 Texas Tech at home, at No. 13 Texas and home against No. 2 Baylor. KU could be an underdog in all three games. And losing all of them is certainly within the realm of possibility.

But even if that happens, and the Jayhawks finish the regular season at 16-10, Self will move forward believing that his team is prepared for anything. Their chances at success will be up for debate, but their preparedness will not be.

Entering March at 16-10 as a middle-of-the-pack seed in the NCAA Tournament would make the road tougher, and the Jayhawks’ confidence would be a real concern. But one of the things KU has prided itself on year after year, no matter the record or postseason seeding, is being in position to be a true contender.

“No school has ever done what we've done, from a consistency standpoint, as far as being in the game year in and year out like this program has," Self said when talking about the program's 231-week AP Top 25 streak that recently came to an end.

No one will be picking Kansas as a dark horse Final Four team when the brackets are revealed next month. But that doesn’t mean the Jayhawks are out of it yet.

A response that I feel could help the team. When players are afraid to make a mistake and probably are not aggressive to prevent mistakes. Wilson for example when he makes a mistake or fails a shot shows disappointment and maybe hopes not to get jerked from the game. Expressions by Self probably is a factor. If you are aggressive you can and do makes mistakes. But it also affects your opponents so don't fret mistakes make wise decisions and that will help.

This team cannot play defense the way Self wants it played. There are occasions when it seems to click but not for long.