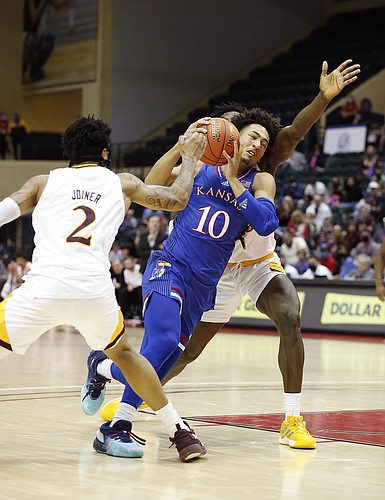 Struggling Kansas sophomore Jalen Wilson has two players on his own team that he can turn to while searching for a way to flip the switch and snap out of his early-season funk.

Even though they play different positions and are asked to do different things, finding out why things finally clicked for senior forward David McCormack against St. John’s would be a good conversation for Wilson to have.

After that game last Friday night, in which he scored 15 points and grabbed a career-high-tying 13 rebounds, McCormack said it was all about letting the game come to him and playing with a free mind. In short, he took the pressure off of himself and made the most of his opportunities when they came to him.

Heck, even junior guard Christian Braun had a bit of a slow start to the season — relatively speaking, of course — and then flipped the switch and has been a madman in KU’s past four games. His secret? Just play.

Braun has been in attack mode non-stop during the past four games and he has thought less and acted more, opening up opportunities at the rim, on defense and in big moments. No one on this KU roster appears to be having more fun playing the game right now, and that, it seems, has allowed Braun to become the poster child for what playing free and having fun can do for one’s game.

Wilson is the kind of player who seems to thrive under pressure, but pressing is one thing that won’t help. He knows that. But, with the way Ochai Agbaji and Braun are playing, Wilson does not need to be this team’s hero.

He just needs to be a player whose effort, energy, ability and matchup-problem potential take the Jayhawks from a very good team to a great team.

“He’s got to become one of our best players,” KU coach Bill Self said of Wilson after KU’s win at St. John’s. “He can drive it. He's a better shooter than what he’s shot it. He hasn’t made any free throws.”

Against St. John's Wilson finished with 5 points on 2-of-8 shooting (1-of-2 at the FT line) while adding nine rebounds and three fouls in 16 minutes. For the season, he's now averaging 4.5 points and 5 rebounds per game while shooting 32% from the floor, 33% from the free throw line and still searching for his first 3-point make after misfiring on his first eight attempts of the season.

If his teammates stay at the level they’re playing and Wilson finds his footing, he can become the guy that Self gushed about throughout the preseason. As was the case with McCormack, the Jayhawks, to a man, all believe that Wilson will find his rhythm again.

It’s been hard to come by in the early portion of this season, partly because of the self-inflicted wound that took him out of the lineup for four games and partly because KU has too many guys worthy of real minutes.

That wasn’t the case last year. So, Wilson got the chance to play a ton early and he responded by quickly turning into one of KU’s top offensive options. Despite being bigger in some areas and leaner in others, more explosive, faster and stronger heading into this season, that guy has not shown up yet.

Whatever the reason, Wilson appears to be very much in his own head when he’s on the floor. He’s overthinking things with the ball in his hands. He disappears at times when he doesn’t have it. And the confidence and swagger that made him that dude a season ago has been missing completely.

Wilson would benefit from seeing the ball go in a time or two early in games. But when he’s on the bench for the first 5-7 minutes of each game, those buckets — even if they did come — would not drop until midway through the first half. At that point, Wilson’s still feeling the game out while at 10-12 other guys on both teams have already done that.

That reality can make it difficult to operate as a primary threat. And until he starts doing that again — whatever it takes for him to get there — Wilson’s passive play may continue.

He surely knows what he needs to do. And he has the talent to do it. At this point, it’s just about clearing his head, wiping the slate clean and focusing on what happens from this point forward, forgetting about what has taken place thus far.

“He's just a better player than what (he’s shown so far this season),” Self said. “But he’ll get back. He's a little frustrated now, but that’s a whole different element to our team when he starts playing.”

“difficult to operate as a primary threat”

Part of what made David successful at StJ was getting away from this notion of needing to operate as a primary threat. Very rarely did the O run through him. Instead he focused on the grunt work and cleaned up to a career best game.

Very rarely will we need JWIL to be a primary threat which will likely make him much more of one and more importantly a greater asset to the team.

Sometimes players are passive because they look around them and realize there are a lot better dudes on the team. No switch to be flipped here.

Harris a Self special favorite lacks scoring ability. Teams will notice that and leave him open. I believe if R Martin was the point guard the offense would be much better. Wilson his replacement. I think teams with tall players will benefit rebounding and easy shots.

**On that night in March, Bill Self made it clear his mission was to improve the talent and athleticism on his roster to make sure getting outclassed like that wasn’t a possibility this season. Self brought in four transfers to go along with the four returning starters. The outlook is promising. And Nijem says there’s a collective belief and mentality from the coaches, support staff and players.

“The goal is to play in April,” Nijem says. “Anything short of hanging that banner I think it’s gonna be a disappointment. We don’t shy away from that. Guys who have been here talk about that openly and the new guys who came to Kansas came to get the same thing done.” **

Yadee yadee yaduuh..... Tell me coach, have you seen JWill dunking in practice? Let's not talk about confidence if he even doesn't do it. I don't think he's like Dedric (Shannon can help here). I don't think JWil's got sticky feet, heavy legs. The guy has pretty good ball handling skill, but man, how predictable his move is. Somebody needs to teach him hesitating move, dribble with bounce, how to fool defender with fake in-out dribble move, point is to become unpredictable. Count how many layups/drives did he make. His percentage is very very low. Count how many times he kicks the ball out after half-way driving the ball. Do you know why? because he does not know how to finish the drives!!! Once he knows how to take the ball to the rim, I'm very sure his confidence level will go up. Trust me.

Matt, do you have insights whether Mr.Ramsey has plyo program for JWil...? Do you know what kind of training JWil did this past year after attending NBA draft event?