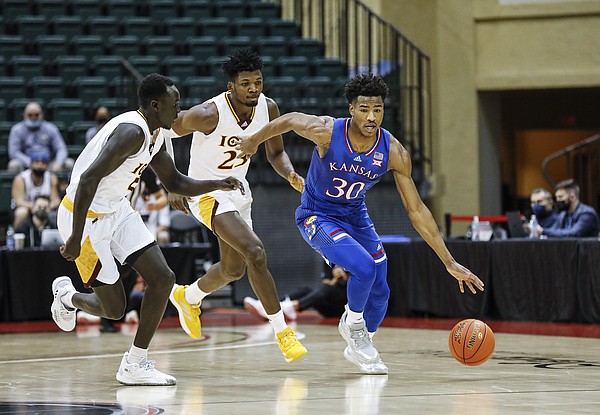 Through the first six games of the Kansas men’s basketball season senior guard Ochai Agbaji has been on fire, leading the team in scoring five times and putting up consistently strong numbers no matter who the opponent.

As easy as it is to see that by looking at his name in the No. 7 spot on the list of the nation’s leading scorers or by checking the KU box scores to see that he’s shooting 55.3% from the floor and 41.7% from 3-point range, KU coach Bill Self provided another way to comprehend Agbaji’s hot start just before the team left Florida.

And he needed just a single word to do it — human.

“I thought Och played well,” Self said after KU’s win over Iona in the Orlando tournament’s third-place game. “He didn’t play as well as he had been, but he still gets 17 (points) and five (rebounds) and three dimes on 14 shots, which is pretty darn good. He’s kind of become human for us while he’s been down here, but it’s still been pretty darn good.”

Six games into a senior season in which he vowed to be more assertive, Agbaji has been exactly that. He leads Kansas in scoring (22.5 points per game), shot attempts (94), 3-point attempts (36) and free throw attempts (21).

He hasn’t given much on the rest of the stat sheet yet, but his ability to get a bucket at any time and in a variety of ways has been more than enough of a contribution for this Kansas roster.

After flirting with the NBA draft last summer, Agbaji said it was a conversation with the GM of the Toronto Raptors and other team officials that served as his light bulb moment for a return to school.

During that talk, he heard the word “assertive” and knew all he needed to know about what the Raptors and other NBA teams wanted to see from him. So how many times did he hear that word during his conversations at the pre-draft combine?

That was all it took.

“That's kind of just been on repeat in my head since that moment that I got told that,” Agbaji said. “And I'm just trying to keep it going throughout the season.”

Asked to elaborate on the specifics of the conversation, Agbaji obliged.

“If you go back to school, that's the one thing, being assertive, assert yourself more on the defensive and offensive end,” Agbaji recalled being told. “Just be more aggressive about my game and my mentality.”

After three seasons as a role player, Agbaji knew he needed to step into more of a leadership role for this team. But rather than force it, he let it happen naturally, and he said it did not take long for him to see that the transition from supporting actor to leading man

“Everyone was on a different wavelength of just like, ‘He's the guy. He's the guy that's going to lead us,’” Agbaji said. “But I still look up to other people on our team as leaders also. It's not like I’m above anyone else on my team.”

While that approach has gone a long way toward building chemistry on a roster with a whole bunch of new faces, Agbaji said the respect he feels from his teammates is the direct result of them seeing how much work he has put in and how much he cares.

“Really just everything about my game,” he said when asked what was different this season. “My mindset towards it, my approach towards the game, my approach in practice and even when I'm just working out by myself. I think my whole mind space has just changed.”

While Self has been more than pleased with Agbaji’s newfound aggressive mentality, he still would like to see Agbaji — and others — attack the basket more than they have.

“As much as those guys have the ball, when CB (Christian Braun) and Och combine for one free throw (vs. Iona), they can still be more aggressive,” Self said.

Its interesting how we beat Tarleton by 26 and Gonzaga struggled with them led by 1 at the half and won by only 9. Gonzaga dismantled UCLA at the time no 2 ,Duke beat Gonzaga and now Duke loses to 2 loss Ohio State who beat an Akron team by 1 .....It gonna be a wild year

Good illustrations of “on any given night”, Mallory. Part of the reason why so much gloom and doom after Dayton is overblown. Individuals and teams will have off games. Everyone does. The year of practice is about reducing the number and severity to hopefully string together the best series in March and April.

Mallory, your right its going to be a wild year.

Dirk, what can I say? Time and time again you read something and then try to make it fit your narrative. Like you are flailing at anything to make your point of view the right one. The only sensible take on whatever you decide.

Room to bloom is just as bad as doom and gloom. The only difference is one is based on performance while the other is based on just hope and dreams.

Was Matt's sentence structure correct on this article? Does no comment mean it passed your purview?