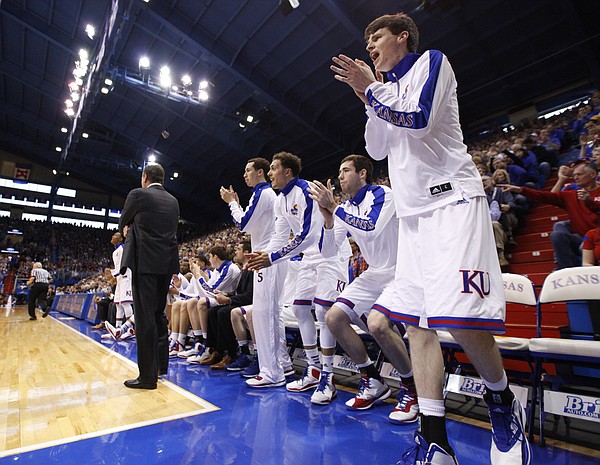 Team manager Chris Huey gets up to celebrate a Jayhawk bucket during the second half, Saturday, Feb. 21, 2015 at Allen Fieldhouse. Huey suited up as a walk on for the game. by Nick Krug

New York — After years of putting his heart and soul into all things Kansas basketball, former KU manager, Chris Huey, is a little more than a day away from facing the Jayhawks for the first time.

Now in his sixth season with St. John’s basketball, Huey, as the Red Storm’s director of basketball operations, has had a significant role in helping SJU (5-1) prepare for its Friday night matchup with Kansas at 6 p.m. at UBS Arena in Elmont, N.Y.

The Journal-World caught up with Huey in New York on Wednesday afternoon, and he acknowledged that, until that interview, he had not let his thoughts drift too much to the significance of facing his alma mater and so many former mentors and close friends.

“Talking to you makes me think about the game a little bit more,” Huey said on Wednesday. “I’ve been so locked in to making sure my family’s good getting to New York and the scouting report’s good that I hadn’t really thought in depth about it. But it’ll be great. I’d say it’s a mixture of surreal and strange.”

There were, Huey said, a couple of texts and phone calls with KU staff members Norm Roberts and Fred Quartlebaum.

“Talking smack leading up to the game,” was the way Huey described it. But those types of interactions are far from rare. He said he communicates with several members of the KU staff on a regular basis and cherishes the relationships he has with them.

“I consider most of that staff as some of my biggest mentors in basketball,” he said.

That includes KU coach Bill Self, whom Huey said he owes “my whole foundation to him.”

“Seeing how to work in the profession, that was the biggest thing I learned from him,” Huey said of Self. “How he runs a program, how he treats people. He’s just a deep-down genu-ine person. I always felt like I was cared about, and those guys were willing to help me grow and learn. I can’t say enough good things about Coach Self, just as a person, let alone a basketball coach.”

In addition to countless lessons about scouting reports, Xs and Os, building relationships and recruiting, Self provided Huey with a moment that he called “one of the highlights of my life.”

Many of you probably remember it.

The moment came in late February of 2015, when Huey, a 2014 KU grad, was in his senior year as a KU basketball manager. Two days before the Jayhawks’ home game against TCU, Self informed him that he would be suiting up for the game.

Whether he would play or not remained in question and was dependent largely on how the eighth-ranked Jayhawks fared. But with a lead large enough, Huey checked in for the game’s final minute and attempted one shot. It missed, but it hardly mattered. The experience of wearing the uniform and playing in a real game was enough for the Kansas City, Kan., native.

Officially, he played 35 seconds. Self, Huey said, remembers it a little differently.

“I saw him at a recruiting event this summer and we were sit-ting by each other and he told another guy we were sitting with the story of how I played in that game,” Huey said. “He embellished it a little to say I was the only player he’d ever coached who got up three shots in a minute, but we had a good laugh over that.”

Asked how often he thinks about that moment these days, Huey said it often comes up when he meets new people or begins working with a new staff.

“I don’t think about it all that much just because we’re so busy and have so many things racing through our minds,” he said. “I’ve definitely been reminded about it, though. Whenever I join a new staff or meet a new coach, they seem to bring it up and say they found out it happened.”

A 6-foot-7, 185-pound forward at the time, Huey spent a lot of that season practicing with the Jayhawks anyway. But the fact that Self thought enough of him to insert him into an actual game meant the world to him and still does.

“It says so much about who Coach Self is, and that staff,” Huey said. “That they would allow me to do that was really cool. Kansas will always have a special place in my heart.”

Is this the same guy that ran suicide drills with the team while pushing a floor sweat mop?

Nope. That was the manager they called "Ollie" - Riley Cobb.