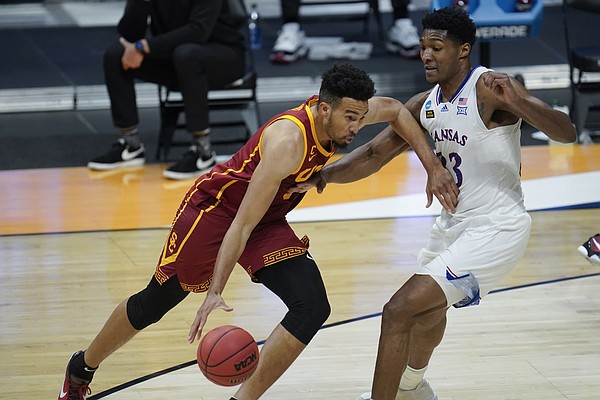 USC forward Isaiah Mobley (3) drives on Kansas forward David McCormack (33) during the second half of a men's college basketball game in the second round of the NCAA tournament at Hinkle Fieldhouse in Indianapolis, Monday, March 22, 2021. (AP Photo/Paul Sancya) by Associated Press

Five months after it happened, evidence surfaced of a unique style of celebration by students at Kansas State University, who clearly took great joy in USC’s convincing NCAA Tournament victory over Kansas that eliminated the 2020-21 Jayhawks from the postseason.

So much so, in fact, that student government leaders at KSU went as far as to extend an official written commendation to the Trojans for the win.

The document itself — yeah, there was a real document — addressed the details of the game, how it was one of the largest defeats in KU history and the Wildcats’ longstanding rivalry with KU.

It also noted that “a hearty Go Trojans” should be uttered by student senate members and anyone else in attendance at the recent meeting.

And there was even video evidence that the rallying cry was used at the meeting.

The document was then sent to USC’s president, athletic director, head basketball coach and student body president, and it wound up in the hands of USC big man Isaiah Mobley, who posed with the piece of paper during a recent USC practice.

The document notes that the resolution was approved unanimously on April 8, 2021. And it was signed on April 19. For whatever reason, the details just hit social media channels this week.

The document, the video and the photo of Mobley holding the piece of paper was posted by the Twitter account for USC Men's Basketball on Aug. 24. So that must have been the first time the Trojans players actually saw the document themselves.

This kind of behavior in rivalries in college sports is nothing new, of course. However, I can’t say that I can recall hearing about anything as formal as this being done. I’m sure it has. But it’s certainly a first in this rivalry. Usually people just make T-Shirts of DVDs to celebrate these types of things.

I can remember Missouri fans buying and wearing Bucknell T-Shirts after KU’s first-round loss to the Bison several years ago. But taking student senate time, all these months later, to do something like this certainly trumps that.

On the outside looking in, the whole thing is easy to laugh off. But you can bet that most K-State fans think it’s absolutely awesome and most KU fans are rolling their eyes about it.

None by USC Men's Basketball

The measure stated that a hearty “Go Trojans” be uttered by K-State student senators! pic.twitter.com/prLcmRnBsJ

None by USC Men's Basketball

sad that they did this, sadder i read about it, saddest i commented on it....

Sadder still - if you look on line 17, they can't even spell "brought" correctly. So much for the Big Ten wanting the Kitty-Kats in their conference because of their high intellect!! LOL

It's kind of like those back window "Pee on xxxx" in that it's always the wannabes displaying their jealousy of #1. You don't see the best celebrating losses suffered by their in-state rivals. In fact, now I have to question my ongoing rooting for the kitties in the tournament when they are not playing us. It will be hard to continue that now.

I don't even have a memory of any team that KSU has ever lost to in a specific tournament game.

Don't forget when KU beat K-State in (Detroit?) on KU's way to winning the 1988 national title over Oklahoma. I won't forget that particular K-State loss.

I hear that K-State has already printed the t-shirts commemorating this and are planning to hang a banner in Bramlage.

It's not a rivalry........ I wish people would just stop with that. Missouri is our rival. Whether we play them or not, that's who I loathe and hate most. Kansas State just makes me laugh and roll my eyes. They try so hard..... it's quite comical. Rock Chalk!!

It appears the lineage of cuckery is actually getting stronger .....

So much for rooting for all Big 12 teams in the tournament. KSU's actions with USC goes beyond tacky. It speaks to KSU's irrelevance.

Sounds more like a promotion for condoms than a slight to KU. Yes KSU fans use more condoms and be more original!

your right Glen , in order for it to be a rivalry the other team has to win once in awhile, trying to remember but when one team can go in and beat what's called a rival what 18-19 yrs in a row on their home floor? - - THAT's not a Rivalry. - -That's just sad yet funny that they are so consumed by KU'S success - they have to reach such depths - But it's ok , they too maybe will have a Basketball team some time. Rumor has it anyways they are talking about starting a team - - we shall see lol

This takes vicarious living to a whole new level. But will they make a commemorative video to sell in the bookstore? Probably on vhs tape to go with the others.

Have the kitties won anything in March since then?

Thanks for the entertainment Matt. It’s good to laugh. I know a person that once claimed to be faster than the family car. Dad let her race the last block home. Fortunately, she grew up by the time she went to grade school. :-)

Oh kitty cats..... We'll be rooting for them in the Mountain West Tourney in a couple years! 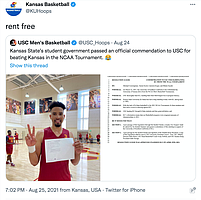 Gotta include the response tweet from @kuhoops. Rent Free is right!

Pretty sad when a Kansas school goes out of their way to celebrate an out-of-state school beating an in-state competitor. I view K-State along the same lines as Wichita State or Washburn, except those two schools know how to occasionally show a little class.

Know this is a late comment but...Just when all this re-alignment stuff starts to hurt our ego as Jayhawks, there's always KSU to assure us that we still have a major impact on lives outside Lawrence!