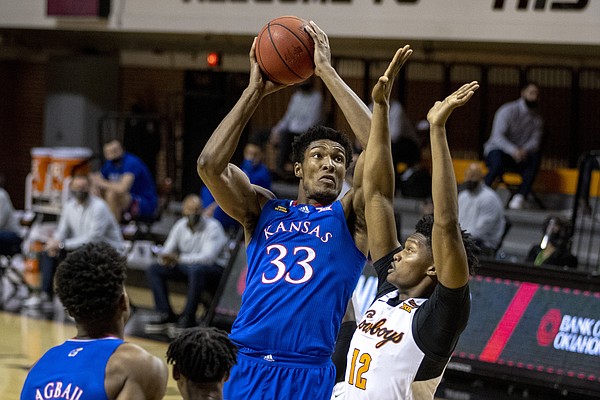 Now that school is in session and the entire Kansas men’s basketball team is on campus ready to get to work on chasing another championship, it’s time to take a peek at some of the specifics with this new-look roster.

In short, it’s time for another “He Will, He Won’t, He Might” series.

In all, 10 newcomers have joined eight returning players, with 14 of them on scholarship and the other four playing as walk-ons.

We’ve learned a lot about the new faces over the past few months, but predicting exactly what they’ll do, let alone how much and where they’ll play, has made this year’s “He Will, He Won’t, He Might” series tougher than ever.

Because of that, we’ll start with some of the veterans.

Last season, it was small forward Jalen Wilson who led the Jayhawks in rebounding at 7.9 boards per game, with the taller and bigger McCormack finishing second nearly two rebounds behind him.

Whether it’s because he figures to open the season much more comfortable this year than he did last year or because he figured out how to work down low in the post-Udoka Azubuike era toward the end of the season, I think McCormack will be KU’s leading rebounder this season.

He finished with eight or more boards in seven of KU’s final 12 games a season ago. That stretch included three of his six double-digit rebounding efforts for the entire season.

With McCormack, it’s all about effort and energy. When he’s locked in and his head is in a good place, he’s arguably as good as anyone on the floor and his numbers often reflect that.

Last season was tough on these guys for a lot of reasons, COVID, the 2019-20 hangover and having to replace several key players all took their toll.

But things seem to be a little more comfortable today. KU returned its core from last season and added a ton of talent via the transfer portal and incoming freshman. As a result, the expectations are where they normally are at Kansas, with the Jayhawks sitting as a likely top-3 team in the preseason polls and a true contender to win a title.

McCormack will be a big part of that quest and I expect him to be in a good head space right out of the gate this time around. I think you’ll see a player who is both more comfortable and hungrier, which should make him a double-double machine from start to finish.

He Won’t: Play on the perimeter nearly as much as he could

There has been a lot of talk the past couple of seasons about how good McCormack could be on the perimeter.

While that’s true offensively, where his range extends out to 15 or so feet, it’s still a work in progress on the defensive end.

Because of that, you should expect to see McCormack spend most of his time operating in and around the paint this season. That little 15-foot jumper will still be available. And his jump hook, with either hand, could be a weapon, as well.

The Jayhawks are loaded on the wings, though, and pulling McCormack away from the basket will likely not be necessary.

In fact, even in the instances when he’s out there with another big — be it Cam Martin or Zach Clemence (which I expect at least some of the time) — it’s those other guys who are more likely to work on the perimeter, leaving McCormack all the room in the world to operate inside on offense and clean up the glass on defense.

For his own personal growth and development, McCormack needs to continue to improve his perimeter defense. We all saw how well that worked out for Azubuike during his final season as a Jayhawk.

Because of the way the college game is played, McCormack should still get plenty of opportunity to play in space on the defensive end while staying as close to the block as possible on offense.

He Might: Be named an All-American at season’s end

If you look back at McCormack’s 2020-21 season from Jan. 28 to the end, you’ll see 12 out of 14 games in double figures, with averages of 15.5 points and 6.7 rebounds per game. Both numbers were better than his season averages.

What’s more, he shot 57% from the floor during that stretch, recorded 14 of his 30 blocks on the season and also showed an ability to get to the free throw line with more regularity.

All of this is a roundabout way of saying that McCormack, finished the year on a high note, and we now know that at least a handful of those games at the very end were played on a bad foot that required surgery in the offseason.

Provided he can stay healthy, and if the above predictions hold true, McCormack has the potential to average a double-double during the 2021-22 season.

It might not be the most stout double-double you’ve ever seen, but if he can average 13 points and 10 boards at Kansas and in the Big 12 Conference, against what figures to be one of the nation’s toughest schedules per usual, that should get McCormack consideration for a second- or third-team All-American nod when the season’s finished.

It seems to me that first-team all-Big 12 honors should be the bar for McCormack. He was a second-team choice last season and was close to cracking the top five.

If he starts with that goal, and reaches it, the All-American stuff could come, too.

For McCormack, the whole season, and all of these predictions will be dependent on one thing — does he let loose and play as hard as he can every time he’s out there or does he get in his own head from time to time, limiting his production and potential?

He has plenty of experience. He’s been through a ton. And he’s a senior now. This is at least partly his team.

That’s enough for me to believe that this year’s version of David McCormack will be the best we’ve seen yet.

ah, basketball is coming back...

Yes it is! Matt, Hope you're right about David this year. I think you're 'Will's' are more 'Might's' but he's been such a great guy through the four years there's nobody I'd root for more. From third big going into his sophomore season to 1st team all Big12 would be awesome. Who says we can't develop big guys since Danny left?

I realize the basketball roster is almost as big as football’s,but it just seems wrong to start talking about the upcoming season before even figuring out the 2-deep.

Matt I have to ask, was anything consumed, drank, or inhaled for your inspired writing? This was great! :)

Matt Tait, Thanks for starting your series!! I agree with what you say about McCormack. That foot injury might delay the best part of his season> However, from my perspective his personnel attitude and demonstrated improvement at KU means this will be a great season for him.