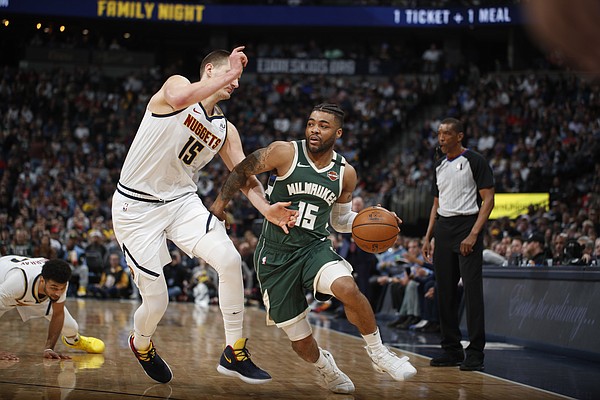 Former Kansas point guard Frank Mason’s journey through the NBA has landed him an opportunity with the Philadelphia 76ers Summer League squad.

Mason, the former college basketball national player of the year and 2020 G League MVP with the Milwaukee Bucks organization, is getting another crack with Philadelphia.

There remains a long way to go before Mason is elevated into the conversation about joining the Sixers NBA roster on a full-time basis. But even a two-way contract with one of the top teams in the East would qualify as a major step for the fifth-year point guard.

Mason has played for three teams in his first four professional seasons — two with Sacramento, which drafted him No. 34 overall in the 2017 NBA draft, and one each with Milwaukee and Orlando.

Mason earned just over $2.5 million for his first two seasons in Sacramento before signing two-way contracts with the Bucks and Magic in the years since.

With the Bucks, Mason appeared in just nine games while starring in the G League for the Wisconsin Herd.

With the Magic, Mason played in just four games before an injury derailed what appeared to be a path toward more playing time with the NBA club.

So now it’s an opportunity with the Sixers. If successful, Mason could be reunited with 76ers star Joel Embiid, with whom he played one season at Kansas as a freshman.

Even if this latest Summer League opportunity does not lead to a contract with the Sixers, Mason essentially is auditioning for the 29 other teams in the league. His blend of poise, toughness and intelligence make him an interesting option for just about any team looking for point guard depth.

In 90 games with the Kings, Mason averaged 7 points, 3 assists and 2 rebounds in 15.8 minutes per game. While those numbers did not lead to a long-term stay in the California capital, Mason often showed that, when healthy, he had what it took to compete at that level.

At age 27, the former Jayhawk great still has a little time to prove that he can stick in the league. Shining with Phily’s Summer League squad in Las Vegas would be a good first step to getting the chance to do just that.

Good wishes to Frank. My wife and I are pulling for him to do well.

There has never been anyone Jayhawk Nation has wanted more to make it on the big stage.

Love that guy, if we was only 4 inches taller he would be a AllStar

"Even if this latest Summer League opportunity does not lead to a contract with the Sixers, Mason essentially is auditioning for the 29 other teams in the league."

Hasn't he already proven himself by winning the G league MVP? What more do teams need to see to know that he's worthy of consistent playing time?

Just a guess here, but I’d say consistently do it against NBA competition. Opportunity is a big part of that. And maybe someday he’ll get a good one & catch a couple of breaks. But to this point, he’s been OK against NBA teams and torched G League teams. Needs to bump that OK up to solid and then the opportunity got more minutes may come. Even then, there are no guarantees.

Frank’s as tough as they come, mentally and physically. He’ll stay in it and give himself every shot in the world. Others have to, too, though.

That translates to an average of 14 points, 6 assists and 4 rebounds in a fairly standard 30-ish minutes per game. Sounds better than what other starters are averaging.

Similar to D-tae, he needs a consistent chance though I do recall him having the misfortune of an injury when a big opportunity came his way in Sac-town. Guessing he’s still doing alright playing the game he loves.

I understand the desire to be in the NBA, but couldn’t Frank make several million playing abroad?