A household name in college basketball he is not, but Jeremy Case is ready and qualified for his new role as a full-time KU hoops assistant 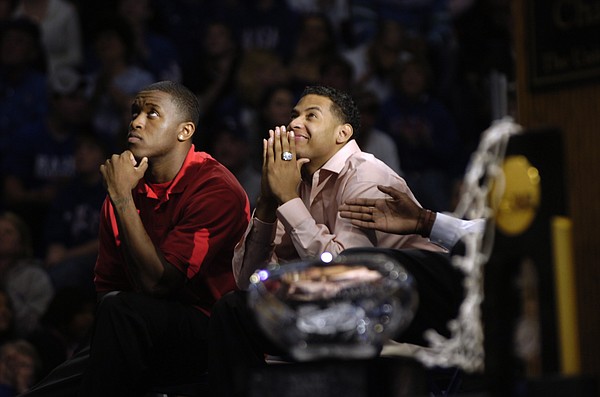 When Kansas fans first caught wind of Jeremy Case as a real option to replace Jerrance Howard on Bill Self’s staff, the reaction was somewhat mixed.

I’ve never met anyone who doesn’t like Case. In fact, most people absolutely love him. But there were — and probably still are — plenty of KU fans out there who were worried that Case would not be able to recruit at the level needed to be a factor in the biggest battles for the best players year in and year out.

For one, Case, who was officially promoted into the role of full-time KU assistant on Monday, is not doing this alone. In Norm Roberts and Kurtis Townsend, the Jayhawks still have two of the most accomplished and experienced recruiters in the college game today. And then there’s Self.

Not only will they all still be major factors in KU’s recruiting efforts, but they also have been grooming Case for the transition, both for the past four months and for the past five years.

And then there’s the fact that Case, who’s still young, has plenty of cachet behind his name.

He’s got a national championship ring. He played at Kansas. He played with and against all kinds of future pros. And he has been a part of a KU coaching staff that has developed several pros just in the past five years.

Selling himself as a man who knows what big time college basketball is about won’t be hard because he does. He lived it.

Selling Kansas as a big time college basketball school won’t be hard either.

Even if the knock on the program right now is that it is not getting the 5-star guys like it once did, KU is still recruiting at a very high level.

Oh, and nearly all of that came with the NCAA and FBI investigations hanging over the program. Don’t get me wrong; those issues cost Kansas some very good players during that time. But it’s not as if the staff struggled to put together quality classes.

We’re getting away from Case a little there, but the point is this: He’s got the pedigree, he’s got the program and he’s got the support from those around him.

What we haven’t talked about yet is his drive. It’s enormous.

Case did not want this job because of the bump in pay or the flashy title that he can brag to his friends about. He wanted the job because he wants to be great.

Beyond that, his genuine passion for the program, the university, the people and the community merely add to the list of reasons he wants to do great things and give it his all. He'll want to succeed not only because of what it will mean for KU but also because him doing so will make those who believed in him and gave him this chance look good as a result. That's just the way he's wired.

Jeremy Case is not Gerry McNamara, a top assistant at Syracuse, Jon Scheyer, the head coach in waiting behind Coach K at Duke or Kim English, who is set to begin his first season as the head coach at George Mason this fall after successful stints at Colorado at Tennessee. All of those guys were stars on their college squads who played big minutes and major roles.

Case did not. But he was there for every practice, clutch moment and big win. And he knows the ins and outs of what Kansas basketball is as well as nearly anyone.

At 36 years old he’s both young enough to relate to the players and old enough to have gained some very real experience.

The players he recruits will love what he’s about. The parents of those players will adore him. And his understanding of basketball, work ethic and approach to coaching are top notch.

Not only is he ready for this role, he has every reason in the world to absolutely crush it. The bet here is that he’ll do just that.

Matt, I'm very glad you wrote this. I admit to feeling a bit of unease about Case. Not because of anything I know, but just a weird feeling that we were somehow settling or that KU couldn't get anyone "better" because of the ongoing investigation or some other reason. This column settles my feelings and I am now happy to welcome Coach Case to the staff.

It's hard not to root for Jeremy Case to succeed. My wife and I support this decision and with him the best with his future both while at KU and beyond.

Some people might wonder about the selection because they link Coach Case to Jeremy the player. When he was playing, I’m recalling there being articles about him being the best shooter on the team throughout his time, but with the exception of senior night (?), never showed it in the games though given opportunities.

Sometimes the best coaches/teachers aren’t the best players/students because they had to work and study a bit more to achieve. Fortunately, he has had the opportunity to learn from a great coach. I’m looking forward to great things from CC in the years to come. Maybe he will be like Scheyer and McNamara in eventually becoming the HC in waiting to lead his alma mater.

Bill Self should have brought Danny Manning back to KU where he belongs!

Case has a ways to go. Glad he is surronded by exerience, cause he will need a few years to grow into the job. No issue with the promotion. Nice guy, but this is a who you know promotion. Does not hurt he is already here and part of the program either.

I guess we'll see how it plays out. Self received interest in the job from all over the place and still went with Case. Clearly that means something. I think Self believes Case will be great. And now they both have the incentive to make sure he is.

I agree Matt, but it’s a bit concerning that Case admits, he out of practice with recruiting, and not used to going up against other Blue Bloods. Other coaches who were interested would not have this weakness. They might even bring in experience in part of the country we struggle with. On the other hand, he is not new to the program, nor how Coach Self likes to work. Does not need to get used to the campus etc. Heck Coach might even like the mentoring part of a young coach, something different for him.