AD Chatter: Could KU's search be over on Monday? 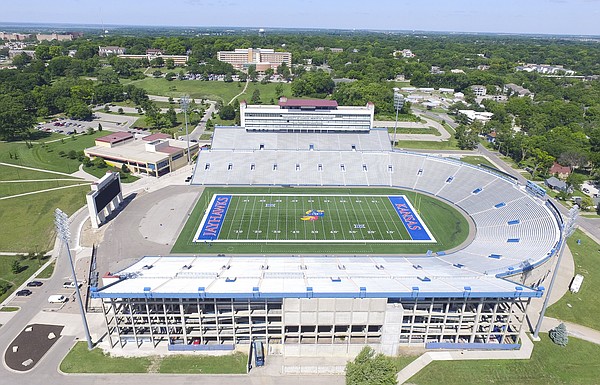 Now that we’re smack dab in the middle of KU Chancellor Douglas Girod’s “within the next few weeks” timeline that he provided after KU and Jeff Long parted ways on March 10, here’s a quick look at the latest info I’ve been able to gather as KU’s search for a new AD moves into its fourth full week.

I have not yet been told that KU’s search for a new athletic director will end on Monday, but it sounds like it definitely could.

Sources indicated this weekend that there’s been talk of the KU plane (and perhaps more than one private plane) heading from Lawrence to Chicago on Monday, which would certainly lead you to believe that Northwestern Deputy AD Travis Goff could be the pick.

I also was told over the weekend that Tulane AD Troy Dannen was (or perhaps still is?) involved deep into the process and, like Goff, went through both Zoom and in-person interviews.

The Athletic’s Matt Fortuna reported last Tuesday that Goff and Dannen were “the favorites to land the job.” And while every indication I’ve been given since then tells me that that was dead on, I heard of at least one potential mystery candidate who might have been involved as recently as last week.

None of my sources shared a name — or even speculated — on that one, but at least one of them heard that the KU plane visited Dallas last week.

As we’ve learned far too many times during these deals, that could have been completely random or for some reason other than the AD search.

But if the plane was in fact in Dallas AND there for the search, the two most likely names that come to mind there are SMU AD Rick Hart and North Texas AD Wren Baker.

No big revelation here, but another source told me last week that KU, at least initially, wanted to look long and hard at sitting ADs. However, KU ties also were deemed to be important in the search, and Goff graduated from KU and grew up in Dodge City.

For what it's worth, KU's open AD job listing was still on TurnkeyZRG's website as of 11 p.m. Sunday night, but given that the search firm prides itself on keeping things quiet, it would make perfect sense to me for the listing to stay there until an announcement is made.

Because Goff is the hottest name at the moment, here’s a little deeper look at his resume.

After working in the KU athletic department following his graduation in 2002 (journalism and sociology), Goff went to Tulane to get his master’s degree in business administration in 2007.

After getting his master’s at Tulane, he stuck around and worked as an Associate AD for External Affairs until leaving for the job of Deputy Athletic Director/Assistant Vice President (Development) at Northwestern in late 2012.

According to his Northwestern bio, Goff, as a member of former Northwestern AD Jim Phillips’ executive staff, has been involved in “all high-level strategic decisions for the department,” while also serving as the sport administrator for football, volleyball and baseball.

Phillips recently announced he was leaving Northwestern to become the commissioner of the Atlantic Coast Conference, and CBS Sports’ Dennis Dodd recently reported that Goff has been heavily involved in helping find Phillips’ replacement.

Goff’s bio indicates that he has seen more than $400 million worth of facility upgrades during his career, and, in addition to his administrative duties, Goff has led Northwestern’s Athletics & Recreation’s fundraising initiatives, which include a campaign goal of $450 million, major gift and annual programs and overseeing a team of 11 development professionals.

In 2019, Goff was named to Sports Business Journal’s “Power Players in College Sports” list. A year earlier, he also was recognized as a College AD “Next Up” honoree, as one of 11 people on a list of administrators who were ready to become athletic directors.

If Goff is the man, then he will need our support. He must be bold and decisive, and he must understand the passion of KU fans, and the truly unlimited potential of the brand. I don't know how many times I've been in an airport, with a ku hat on and had someone come up and start talking to me, Ku grad, ku fan, all ages, races and creeds.

The NCAA albatross is a vicious bird, the hole that KU football resides in goes to the center of the Earth, but the only way out is up.

We live in metro San Diego and get the same thing here. We'll hear 'Rock Chalk' or "Go Jayhawks' or someone will just come up with a smile and start chatting up KU. It's everywhere.

Goff sounds like a really strong candidate. Lots of boxes checked based on Matt’s research.

The Tulane connections would suggest that Willie Fritz will get a hard look for the HC job. But since Goff would also know the Big 10 well, maybe there is a coordinator out there that he might have his eye on?

With the Self business resolved, it’s time to move on and get high on KU Athletics again. We need some fresh energy. The sky is the limit for Kansas Athletics.

Bro! That got me pumped up.

Layne, as a KU grad from Douglas City, I’m sure he is fully understands the Jayhawks brand. That is part of the beauty of hiring a graduate.

$400k is a lot of money though less so when spread over almost a decade. On a more positive note though, I believe Northwestern’s football program has improved significantly in that time. They used to be a doormat and now are playing for championships and bowling, albeit out of the weaker west division. The improvements probably go back to when they struck it rich with a local young(est) stud coach in Fitzgerald.

i didn't see a percentage wheel...

So, is Travis Goff a member of Goff Motors (in Dodge City) Family?

Yes. His parents were inducted into the Dodge City Community College Sports Hall of Fame for all of their support providing vehicles for coaches to recruit, etc.

"Goff has been heavily involved in helping find Phillips’ replacement." I am curious as to why he was not considered as a candidate for the position?

Exactly what I was thinking, seems a bit peculiar!

The Athletic is reporting that Goff is the one getting hired.

Several outlets have reported Travis Goff has been hired about an hour ago.

Matt Tait. On the job!