Now-former Jayhawk Marcus Garrett said he felt like he played with a Dream Team at KU; here's what it looks like 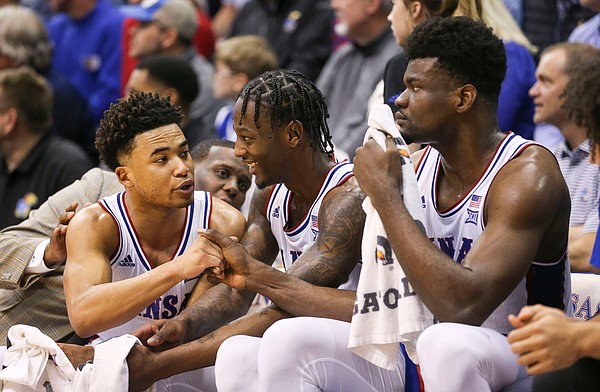 Marcus Garrett’s heartfelt farewell to Kansas basketball was everything KU fans could possibly have wanted it to be.

It was genuine, well thought out, respectful and emotional. And it perfectly summed up what KU meant to Garrett and, in turn, what Garrett meant to KU.

While the thought of a Bill Self basketball team without Garrett on it will take a little getting used to, something Garrett said in his goodbye got me thinking and I figured those thoughts were worth sharing here.

“I’ve played with so many great players during my time here,” he wrote. “It was like a Dream Team. I will cherish all my teammates.”

So just what does the all-Marcus Garrett Career Kansas basketball team look like?

In a word: Nasty.

That’s a ridiculously good team. And while you could make an argument for other players to be included at the 3G and 4 positions, there is absolutely zero debate on the other three spots.

And, since they were Garrett’s words that sparked this thought, I didn’t hesitate to put Garrett in the starting five. Truth be told, Garrett would’ve been on there anyway for me.

From the way he played the game to the way he carried himself and treated everyone he came into contact with, Garrett was as much fun to cover as just about any player I’ve ever been around.

Another year would’ve been fun. You can never be around too many guys like that. But, for what it’s worth, it does feel like he made the right choice here, and I think he’ll have a real shot to catch on with an NBA team. Even if not, he’ll be playing basketball for money for a long, long time.

OK. Back to the exercise at hand.

With the starting five set, I needed to come up with eight more players to fill out the roster.

Here’s who I went with. Many were no-brainers, but there were a couple of tough choices.

• Svi Mykhailiuk – No-brainer. And, honestly, you could make a strong case to start him, either in Garrett’s spot or at the 4 instead of Lawson. I went with Lawson, though, because we never got to see how it looked to have him and Dok playing together.

• Ochai Agbaji – Garrett and Agbaji were partners in crime for two full seasons and the talented, no-frills shooting guard would be good on just about any team.

• Malik Newman – Another no-brainer. Mr. March was a major part of KU’s squad during Garrett’s freshman year and he can fill it up offensively and offer another option as a ball handler.

• David McCormack – It’s easy to forget since McCormack’s roles were smaller during his freshman and sophomore seasons, but these two played together for 3 years and McCormack played a huge role during Garrett’s final season as a Jayhawk. He adds good depth and size up front.

• Quentin Grimes – Say what you will about his lone season with the Jayhawks, Grimes proved (really then and in the 2 years since) that he has a couple of legit skills. For a player like Garrett, who's best — and probably even elite — with top talent surrounding him, Grimes’ addition is an easy call.

• Christian Braun – While there might be better players who did not make the list, none of them bring the same kind of scrappy, do-anything mentality as Braun. His minutes would be tough to come by, but he’s great insurance in the backcourt and also can be a spark at any time.

• Dajuan Harris – This was kind of a fun selection. While Garrett, Newman and even Braun all couuuullldd play point in a pinch, none of those three are best suited as point guards. Harris is. And on this team he’d be a deep reserve behind Dotson and Graham. Like Garrett, Harris is at his best when the talent around him is top notch. This team has that and he’d be a great fit.

I thought the same thing, but when I went and checked Marcus got here the year after Frank left so that's why he wouldn't be on the list.

And what exactly are the 'couple of legit skills' you're speaking of with Q Grimes? Watched the final 4 game with them and saw the same player he was here. The aggressiveness of Wiggins without the physical gifts. i was ready to be sorry he had left but that was not the case.

Q was certainly not a star in all facets, but he was the leading scorer and a pretty fair rebounder on a better team than we fielded in 21. Not sure his reason for leaving was ever revealed. I wish him well.