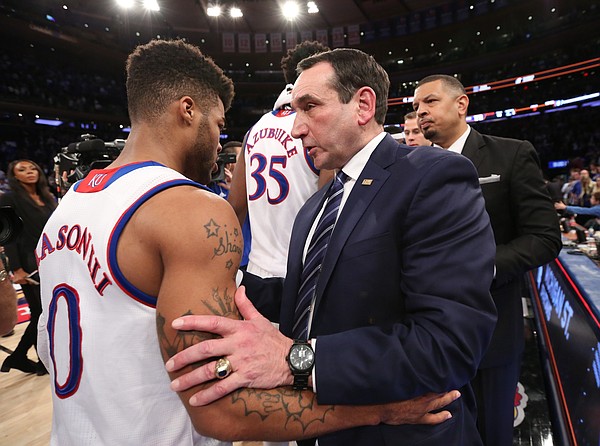 There has been talk in the past about expanding the men’s basketball NCAA Tournament from 68 teams to 72, 96 or even 128. But if the ACC coaches get their way in 2020, those numbers will look tiny.

According to multiple reports Wednesday morning from national college basketball writers across the country, the ACC coaches this week voted unanimously to propose a plan that allows all Division I men’s basketball teams to participate in the 2021 NCAA Tournament.

Not most. Not more. Not almost all. All.

Stadium’s Jeff Goodman reported that the idea was led by Duke coach Mike Krzyzewski. And it has been met with mixed reaction since the proposal surfaced.

Some love it. Included on that list is Syracuse coach Jim Boeheim, who said that the 2020-21 season is going to be different anyway and that the powers that be need to think differently to make it work.

Others hate it. And it’s easy to see why without all of the details of the plan being known or digested yet.

At its core, the proposed plan appears to be designed to bring equality to the season.

Rather than letting each school or conference figure things out for itself, therein running the risk of repeating what college football is facing, — with two of the five power conferences not even playing this fall — Coach K and his ACC counterparts are trying to come up with a one-size-fits-all solution for college hoops.

What’s good for the Dukes isn’t always good for the Dartmouths. But the ACC, at least for this strange season, is seeking to make sure that’s not true in 2020.

Will the super-sized tournament replace most if not all of the the non-conference portion of the regular season? Will we still have conference play to determine seeding? Will this thing even work?

Those questions, and many more, still need to be answered. And the good news is there’s time to answer them. But whether you like the idea or not, this, to me, is merely the latest good sign of college basketball’s top leaders staying in front of the pandemic and trying to make sure they are as prepared as possible for the start of the 2020-21 season.

Now is the time to sort those things out, and that appears to be exactly what is happening here.

A proposal does not mean this is the way it’s going to be. The ACC’s plan still would need a ton of support from across the country in order to work. And Krzyzewski himself, in an interview with The Athletic, even said he would be all-in on supporting a better idea, “if there is one.”

A week from today, we’ll have a little better idea of the direction in which things are headed.

That’s when the Division I Council will meet to determine start dates for winter sports. The council is not likely to react publicly to the ACC’s plan at that time, but you can bet it will be discussed.

~ The ACC coaches have been rolling out their support of the plan on social media throughout the day. Here's a look at some of the messages that have come out ~

None by Steve Forbes

None by Chris Mack

C’mon man... let’s give these kids some hope for the tournament after all they have been through over the past year! pic.twitter.com/RccGRta6Bt

None by Mike Brey

None by Jeff Capel

None by Mike Young

ACC Head Coaches stand United. We unanimously agree the 2021 NCAA Tournament should include every Division I program. March Madness For All!

None by Jim Larrañaga

Our program stands UNITED with my fellow @accmbb coaches for an all-inclusive 2021 NCAA Tournament. It is not only a great incentive, but also puts safety first. It's the RIGHT THING to do for every single student-athlete in our sport!

None by Coach Josh Pastner

None by Duke Men’s Basketball

But what will Joe Lunardi do for a living? He must be sweating bullets.

How is including every single school in one massive tournament that will require more sites, bring more people and cause more chances of interaction to occur considered "the right thing to do" you know...... how does that "put safety first". Do these jack wagons really think we're that stupid? The tournament is supposed to be earned and now in this participation trophy world we live in now, well hell....... let's just throw em all in there why don't we. This is a money grab, to get back some of what they lost. That's pretty simple to see.

Everyone gets a trophy!

Add two more rounds and about 45 play-in games and everyone gets invited.

Personally, I'd rather see the tournament paired down and make it double elimination. It's the playoffs. These are supposed to be the best college basketball has to offer. Is it really fair that Maryland Baltimore County gets the opportunity to play Virginia. They didn't have a single quality win during the regular season and their SOS didn't crack the top 200.

Glen gets the bingo. Of it comes from Dixie, it’s about making money regardless of the human cost.

Our 30 consecutive tournament appearances will be rendered obsolete if they let everyone in.