Why I'm not buying the talk of KU playing 2 QBs on Saturday night vs. Coastal Carolina 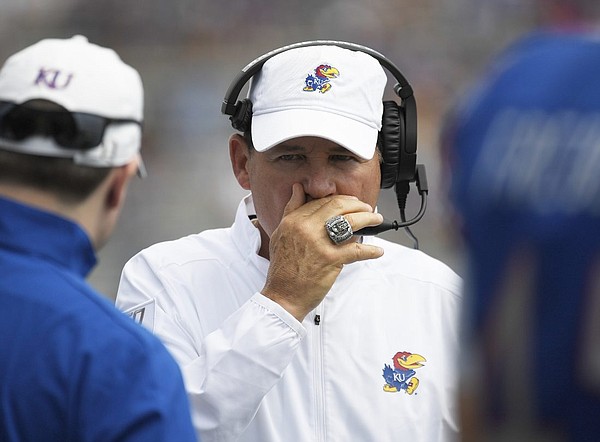 I know Kansas football coach Les Miles said Monday that he could see the Jayhawks playing both Thomas MacVittie and Miles Kendrick in KU’s season opener on Saturday night against Coastal Carolina.

In fact, I’m well aware that Miles even went as far as to call it “a good possibility” that both would play.

But I’m not buying it.

Miles is too smart to do that in the opener of a season in which he and his team desperately need the starting quarterback to quickly establish a rhythm and chemistry in an offense loaded with weapons.

Proof of that came a little more than a year ago when Miles faced a similar situation and elected to stick with Carter Stanley instead of playing two QBs in KU’s season-opening win over Indiana State. And that was even after Stanley threw three picks and did not look anything like the player he became.

Sticking with Stanley in that game last year played a significant role in Stanley’s strong season. And that’s why I’d bet Miles and offensive coordinator Brent Dearmon will stick with one guy on Saturday night, as well.

The rest is just chatter.

A week ago, Miles said he’d likely let the starter play the entire game. This week, he’s saying two could play. And now Coastal Carolina and Kansas fans alike have no idea what to expect.

It might seem silly to play those kinds of mind games with your opponent, but remember Coastal Carolina beat Kansas a year ago. And the Jayhawks are certainly in no position to take anything for granted when it comes to things going their way on the football field.

It's also important to remember that just because we don't know who will start or what the plan will be on Saturday does not mean that the Jayhawks themselves don't. They likely do already and are spending the week preparing accordingly.

So find an advantage — real or manufactured — and do everything you can to use it to help you win the game. There’s nothing wrong with that. As long as you don’t let the game playing spill into game day.

The bigger question is why KU would even consider playing two quarterbacks in the first place.

I realize there might not be a major difference between the two QBs vying for the job, but I just can’t see flip-flopping quarterbacks being the right way to set the tone for the season.

If the starter gets hurt or struggles for a few games then it might make sense or even become necessary. But to switch them out in the season opener just for the sake of doing it does not seem wise.

Remember, with Pooka Williams Jr., Andrew Parchment, Stephon Robinson, Kwamie Lassiter and a handful of other legitimate playmakers, this offense has the potential to put up points and rack up yards.

But the only way Kansas is going to do that consistently is by staying consistent at the game’s most important position.

You can argue that the identity of the QB is less critical in Dearmon’s offense than it is in some other offenses. Dearmon’s system is designed to allow the QB to make quick and easy reads and put the ball in the right place almost without thinking. It’s like algebra — if x+y = 4 then throw the ball to Parchment.

If both KU quarterbacks are capable of doing that, it should not matter what jersey number they’re wearing or how tall they stand.

Last week, I asked KU center Api Mane if it mattered to him who he was snapping the ball to and he said his job was the same no matter who was back there.

And while that’s true to an extent for the offensive line, there are a number of other variables that make trading quarterbacks risky.

The tone of the huddle changes. The cadence of the snap count sounds different. Every QB’s ball has a slightly different feel or spin when it hits the receivers’ hands. Their ability to communicate with non-verbal cues is different. And the energy, encouragement and leadership qualities can change, too.

Why would you add any of that uncertainty to the season opener when you don’t have to?

The answer is you wouldn't. And that’s why I think we’ll only see one quarterback on Saturday night.

I agree fully with Matt on this one.

I disagree. I think MacVittie will start, but will have a relatively short chain. I think Kendrick offers another dimension to our running game, and if that becomes necessary to defeat C.C., you'll see him play meaningful minutes. This will be a crucial game to win and we'll do anything to get that "W".

Jeff has hit an important part of the equation. What if the starter is failing? This first game needs to be a win. Therefore, if that is the case we may well see two QB's. Otherwise I do agree with Matt.

That’s a strong case Matt, especially with the extra data points of last year with Stanley. The 3 variables that are (potentially) different between years are:

Also, x+y=4 is not a simple equation.

Point taken, but it's simple enough, like reading keys quickly in a defense.

X can only equal 0, 1, 2, 3 or 4. And based on that, you know immediately what Y equals. So it's relatively quick and determining X makes Y super easy to figure out.

All of that said, I'm a writer and never liked math so maybe that wasn't the best way to go here. Ha!