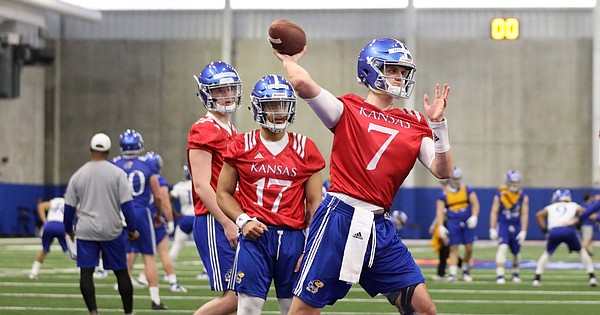 While the Kansas football program continues to wait to name a starting quarterback for the fast-approaching 2020 season, it’s the execution of the QB who wins the job and not so much his skill set that will matter most.

For months, Kansas fans have debated the strengths and weaknesses of senior Thomas MacVittie and junior Miles Kendrick, with freshman Jalon Daniels being thrown into the discussion a handful of times, as well.

But here’s the thing: Both upperclassmen are capable of doing the job as long as they do the job.

Neither player possesses the kind of overwhelming talent in any one area that makes him the obvious choice to take the snaps for the Jayhawks this fall. If that were the case, we’d have had our answer to this question weeks, if not months, ago.

So given the fact that both are capable yet not incredible, it really comes down to which one can best handle what offensive coordinator Brent Dearmon wants them to do.

Forget that MacVittie is a little bit taller and might have a slightly bigger arm. And throw out the idea that Kendrick is more mobile. Truth be told, although their skills are packaged differently, the two are actually pretty similar in the way they play, with MacVittie being more mobile than most people give him credit for and Kendrick being a better passer than has been advertised.

So it’s not so much the skills that matter as it is the smarts.

And while stating that the guy who takes better care of the ball and makes better decisions seems like a painfully obvious way to put it, it really could be that simple with this year’s team.

The fact that the Jayhawks are still searching for that guy is the bigger issue and has been for the past decade.

Even last season, when Carter Stanley delivered the best season by a Kansas quarterback in the post-Todd Reesing era, we did not know the identity of KU’s starting quarterback until opening night.

I used to think covering quarterback battles was fun. I’ll never forget writing the story about Kale Pick edging out Jordan Webb for the job in 2010. I talked to both players and head coach Turner Gill along with some of their teammates. I wanted to make sure I painted a complete picture of how it went down because I was not sure when — or even if — I would get another shot at telling that story.

How wrong was I?

Most of the rest of that 2010 season was about the quarterback quandary, and it’s been that way nearly every season since.

Perhaps Gill jinxed the whole thing by yanking Pick at halftime of his first game after winning the months-long battle.

Or maybe this is the price you pay for three years of Reesing.

Either way, you’d have thought by now that KU would be long past this. But after four coaches, 121 months and 14 different quarterbacks getting a real crack at the job, we’re no closer to knowing if Kansas has found an answer at quarterback today than we were on Aug. 10, 2010, when Pick got the first opportunity.

Think about all that’s happened between now and then. And all that hasn’t.

For what it’s worth, I’d go with Kendrick as my Game 1 starter on Sept. 12. I’ve always been impressed by his poise and demeanor, he has more in-game experience than MacVittie and he seems, to me, to be best equipped to be able to follow the rules and take advantage of the guidelines laid out in the Dearmon offense.

You don’t have to be Patrick Mahomes or Trevor Lawrence to do that. You just have to be smart, decisive and willing to compete on every snap and during every meeting and film session.

I think we could have had a "Reesing"-type situation with Stanley, but he never got a fair chance until last year, and we all saw what he did then.

As for this year, I agree with you that Kendrick seems like the best choice, but I've never been impressed with MacVittie anyway, at least going by his juco stats, which were extremely underwhelming. Hopefully he's improved since then, but he had a long way to go.

While my choice would also have been Kendrick, there seems to be a lot of smoke among the followers of the program for MacVittie (sp). I am wondering why. Does he have some inside track we do not know about. My greatest hope is that Dearmon is the one making the decision.