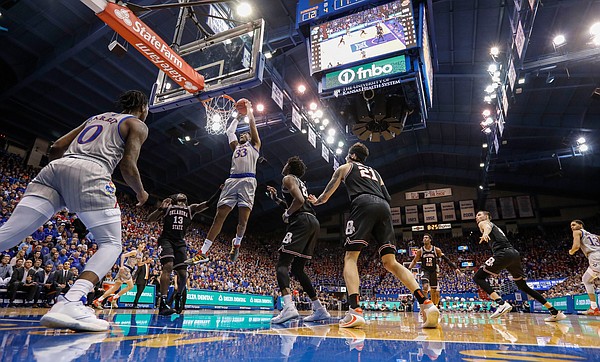 There remains both time and work to do before the start of the 2020-21 college basketball season, but, as of today, no one knows for sure when the season will actually begin.

Last month, NCAA Senior Vice President of Basketball Dan Gavitt said the NCAA would provide some direction about the start of the season sometime in September.

And now that the calendar has flipped to September, the urgency for figuring out how to proceed is likely to jump up a notch.

Again, there is still time. After all, we’re still more than two months out from the currently scheduled season opener — Nov. 10 in Chicago, with Kansas playing Kentucky and Duke facing Michigan State in the Champions Classic.

But, according to a report from CBS Sports college basketball insider Jon Rothstein, the NCAA Division I Oversight Committee plans to propose a start date of Nov. 25 instead of the early-November tipoff.

Rothstein also reported that the Oversight Committee plans to recommend against hosting scrimmages and exhibition games this season because of continuing health and safety concerns related to COVID-19.

The 16-member committee includes seven athletic directors, two conference commissioners and two head basketball coaches — Missouri's Cuonzo Martin and Purdue's Matt Painter. And the committee's recommendation will be voted on later this month (Sept. 16) by the Division I Council.

As of Wednesday morning, KU still had no exhibition games listed on its 2020-21 schedule. Typically, the Jayhawks host two exhibitions per season, rotating in-state programs Emporia State, Fort Hays State, Pitt State and Washburn every two years. But those games — which would be against ESU and Washburn in the rotation — appear to be in jeopardy this season.

Pushing the start date back two weeks likely would change the entire look of KU’s nonconference schedule rather than just backing up the games that are currently scheduled.

There is, however, some wiggle room built into the schedule, with December dates against USC (Dec. 19) and Colorado (Dec. 22) no longer listed on the KU website as a result of the Pac-12’s decision to delay all sports until at least January.

KU AD Jeff Long said last month that Kansas was seeking to replace those games on the schedule, but no new games have been announced at this point.

According to a Wednesday report from CBS Sports' Matt Norlander, the Pac-12 appears to be trying to line things up to be ready to play college basketball by the potential Nov. 25 start date. If they're able to pull it off, that certainly could impact KU's schedule and, potentially, could save the Jayhawks' games with Colorado and USC.

People throughout college basketball, however, appear to have a strong belief that the season will be played in some fashion. Whether it incorporates a bubble approach like the NBA, a conference-only approach like many football conferences have moved forward with or a hybrid of the two like the Big 12 football schools — which have rescheduled for one non-con and nine conference games this fall — remains to be seen.

One other interesting note regarding the 2020-21 college basketball season came from the NCAA itself this week.

According to a Monday report from ESPN’s Adam Rittenberg, the NCAA has applied to trademark the phrase “Battle in the Bubble,” which clearly points to the potential for the 2021 NCAA Tournament — and perhaps more — to be played in a bubble environment if needed.

None of this is set in stone, of course. And things likely will become clearer in the next couple of weeks.

But the Oversight Committee’s reported plan and the NCAA’s latest trademark application both serve as the latest signs that the NCAA is continuing to work ahead of the action in order to be prepared for the fast-approaching college hoops season well before it is scheduled to begin.

My daughter played AAU hoops this summer. Bang around for 50 minutes, but no hand shake after....you know Covid19. Like Covid19 knows whether you are playing an exhibition or nonconference game. Healthy 18-24 year olds are not at risk. Just play.

we have seen plenty of very sick high school and college age students in our hospital.

A close friend of mine, in her late 20s, contracted COVID two months ago. She spent one month going through the ringer - couldn't walk from the bed to the bathroom without stopping to catch her breath. Two months later, she's feeling much better but there are still some lingering symptoms.

Spare me with the talk that college kids are not at risk. Just because they might not die doesn't mean there are no risks.