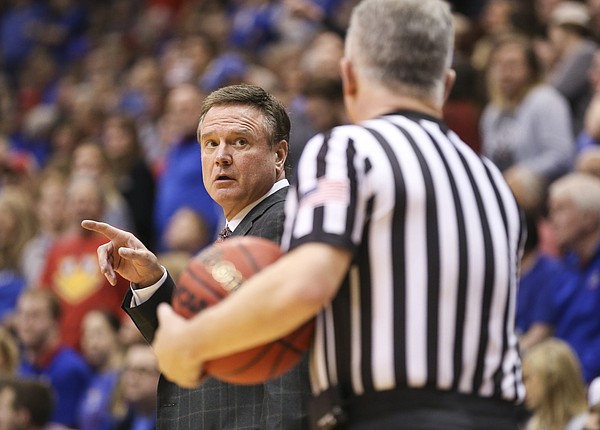 Kansas head coach Bill Self looks for clarification from an official during the second half on Tuesday, Dec. 4, 2018 at Allen Fieldhouse. by Nick Krug

In the two days since the NCAA announced Nov. 25 as the official start date for the 2020-21 college hoops season, we already have seen some serious movement on the scheduling front.

Nothing official yet, but teams, tournaments and conferences across the country are clearly in the process of trying to redraw their schedules.

Normally at this time of year, we’re waiting for the release of the Big 12 Conference portion of the schedule, which seems to come out later and later each year.

It would make plenty of sense then for KU and the rest of the league to release their 2020-21 schedules in their entirety as soon as they’re able to figure out what to do with the nine nonconference games they’re allowed to have this season.

Time will tell if that’s the way it plays out or if we’ll get a slow release of several different games before the Big 12 slate comes out.

For now, though, here’s a quick look at a few of the more notable moves from the past two days that might soon affect the Kansas men’s basketball team.

• According to a Friday morning Tweet from Andy Katz, of NCAA.com, it looks as if the Champions Classic, which will feature KU versus Kentucky and Duke against Michigan State, is eyeing the first week of December in Orlando as its time and location in 2020.

Katz called the Dec. 1-5 timeline tentative in the tweet and, if that holds it would move the Champions Classic back from the season-opening tipoff event to the second major tournament of 2020, with the Maui Invitational moving from Hawaii to Asheville, N.C. and slated for Nov. 30 through Dec. 2.

I’ve heard no new talk of the Champions Classic event becoming a round-robin extravaganza, but did find at least one coach who had already kicked around the idea — Kentucky’s John Calipari.

According to KentuckySportsRadio.com, Calipari tossed out the idea of playing all three teams in the Classic back in August, saying, “With basketball, we’re talking 12 players, a party of 20. I think the bubble or a pod, it’s been shown to work now. Do you have multiple bubbles or pods? Do we go and play the Champions Classic in a bubble, without fans, and we play each other? We all play each other round-robin? We could walk away with three games (played).”

It looks today like the format will hold to two games instead of six, but it’s clear that they’re still ironing out the details.

• Adam Zagoria of ZagsBlog.com tweeted Friday morning that the Big 12 Conference was holding onto two dates in mid-to-late December to host conference games.

Although the specifics of those dates/games has not been made available yet, the idea here is that the Big 12 clearly wants to get things going as soon as possible and has more or less sent out save-the-date correspondence to the schools so they know not to schedule any non-con action on those particular dates.

The Big 12 schedule typically does not begin until the first week of January — Jan. 2 last season — although there have been a couple of conference games played during the last week of December in recent years.

Moving that up to mid-December this year would be notable, but would also make sense given the fact that the schedules as a whole will be four games lighter than last year, dropping from 31 regular season games to a maximum of 27.

• Louisville coach Chris Mack has taken to Twitter to try to get his program in the running to be a host site if college basketball looks at mini-bubbles to play at least part of its nonconference games in 2020.

Mack notes that lodging would be no problem and that medical protocols also would be a part of the plan.

Who knows if those spots really are filling fast, but the idea makes plenty of sense is and certainly one that KU could try to pull off at Allen Fieldhouse, as well.

Think about the teams who could come to Lawrence to play in a bubble-type environment to get half of their nonconference games in — Creighton, Missouri, Wichita State, Nebraska, Tulsa, Iowa and Arkansas all would have easy drives to Lawrence. And, if you’re looking to fill out the field with some teams that you’re more accustomed to seeing in November and December, Missouri State, Omaha, St. Louis and Kansas City could be added to the list, as well.

If Lawrence doesn’t work for some reason — lodging? — something similar could probably be pulled off at T-Mobile Center down the road in Kansas City, Mo.

None by Chris Mack

Could the Big12 be moving forward the start date to allow for makeup dates during the conference schedule similar to what they essentially did with football?

No question. Would make a lot of sense to leave the wiggle room and also to cut down on the times teams pack 3 games into a 6 or 7 day span...