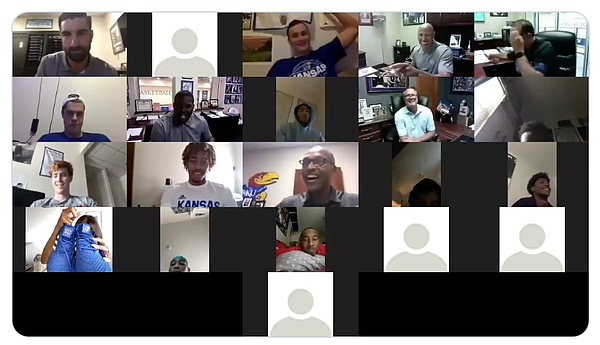 A portion of this week's Zoom call with ESPN host Maria Taylor and the Kansas basketball team, during which Taylor, in the bottom left corner, is showing off her blue KU basketball shoes to the group. by Matt Tait

As part of their ongoing efforts to learn and grow in areas beyond the court, the members of the Kansas men’s basketball team recently participated in a Zoom chat with ESPN’s Maria Taylor, designed to give them tips and advice for how to use their platform wisely.

“Our team is trying to learn, too,” KU coach Bill Self explained during a portion of the call that was made public through KU’s Twitter account. And our team is trying to get better. My team has been unbelievable. It’s the most mature group I’ve had as far as dealing with extra-curricular things outside of basketball.”

When it comes to racial injustice, police brutality, unity or getting more involved in the voting process, the Jayhawks, as a collective group, have shared their thoughts through videos and messages on social media during the past few months.

Self said the coaching staff has given the players “assignments” to inspire critical thinking and that the players, in turn, have challenged Self with similar requests.

The goal, he said, is for everyone associated with the program to “educate themselves in a way where we can hopefully speak somewhat intelligently about some of the issues.”

That’s where Taylor entered the picture. In addition to participating as a co-host on the ESPN networks for shows that highlight thought-provoking conversations about those same issues, Taylor found herself in the middle of a recent social media storm that led to the firing of a Chicago sports talk radio host.

Taylor, who made her debut as a sideline reporter for Monday Night Football last week had her outfit criticized by radio host Dan McNeil, who posted and deleted a tweet that shared his thoughts that Taylor looked more like she should be hosting an adult film awards show.

Dozens of people throughout the sports world supported Taylor through the incident and McNeil lost his job.

While it’s unlikely that the Jayhawks will ever encounter that exact scenario, Taylor’s message was universal and emphasized how to handle those types of situations, regardless of the nature of the specific content.

“I do suggest that you guys get prepared, whatever you're going to do as a team, for the criticism,” she said during the short clip shown on Twitter. “Be prepared for it to be polarizing and be prepared to have tough skin. As athletes you already have it. … How are you going to be when it’s the fans attacking you not just for your basketball IQ or the game (but) about who you are as a person? Are you ready to deal with that? And if you’re not, that’s fine, but don’t say anything then. Wait until you're personally strong enough to deal with that criticism.”

Taylor, who herself responded to McNeil’s tweet by inviting him to come on the NBA Countdown show she hosted Tuesday night — adding, “Hey ladies remember you can wear whatever you feel confident in! — emphasized the fact that, although the Jayhawks represent the program, the university and Jayhawks everywhere, they are still individuals with their own beliefs and the ability to share them as they choose.

“It’s been really interesting throughout this journey to hear how different people and different players are using their voices and are using their platforms,” Taylor told Self and company on the Zoom call. “There’s no wrong or right way to do it.”

Earlier this week, the Jayhawks also met with three members of local law enforcement organizations — Deputy Chief James Anguiano, Lieutenant Myrone Grady and Detective Jack Campbell — for what assistant coach Jerrance Howard described on his Instagram account as “a real, raw and genuine conversation with our players and staff about what to know when interacting with law enforcement.”

“It was a conversation that needed to be held,” Howard added. “And we all learned and benefit from this discussion. Looking forward to building a relationship to help create change.”

THANK YOU, @MariaTaylor for taking the time to speak to the squad ✊

So much respect for you, what you do, and how you use your voice. pic.twitter.com/xM6dhxdTKo

Continuing to listen, learn, and grow as a 𝘁𝗲𝗮𝗺 🤝