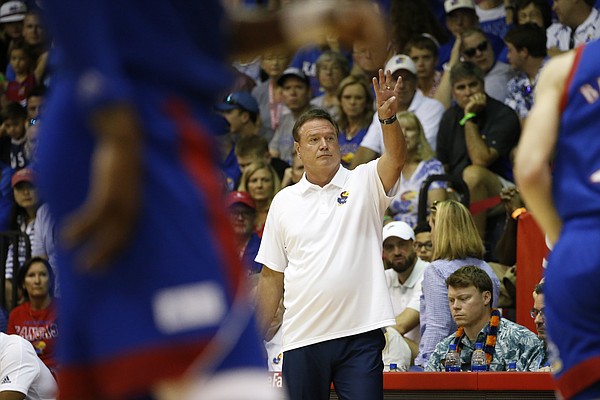 It remains to be seen exactly when the 2020-21 Kansas men’s basketball team will actually play a game or hold an official practice, but when they do KU coach Bill Self will have a lot to look at.

Depth and talent at all five positions will be the theme of the 2020-21 roster, and the incoming recruiting class will play a big role in that.

It includes two potential starters, a big man with a motor that might be unmatched on the roster and an overlooked guard who could be in line to become the next rags-to-riches story in the KU backcourt.

At face value, that’s a solid class. And Rivals.com has it ranked as the 17th best group in the 2020 rankings.

But the class probably should be graded a little differently given the fact that Bryce Thompson, Tyon Grant-Foster, Gethro Muscadin and Latrell Jossell all committed to and signed with KU in the midst of the uncertain and ongoing NCAA infractions case.

“We only signed four,” KU coach Bill Self said recently on an episode of “Hawk Talk.” “And we got them early, but it was a pretty good haul considering we were going against some obstacles.”

In an era when KU and other blue blood programs around the country seem to sign as many one-and-done prospects as they do three- and four-year players, it’s noteworthy that KU’s 2020 class is likely made up of multi-year players.

Even Thompson, despite his five-star status, was regarded in recruiting circles as a player who likely would spend at least a couple of years in college.

He joins a roster with enough veterans, versatility and scoring punch to allow him the time to transition to the college game naturally and at his own pace.

There’s no doubt that his talent and potential have him in line for big minutes right away, and he certainly figures to be in the mix for one of those five starting spots when things get going for real.

“He’s going to be terrific.” Self said of the combo guard. “I think he’s bigger. I think he’s probably at least 6-6 now and still growing. He had a great year. He’s gotten better all the time.”

Joining Thompson in a push for a starting spot will be Grant-Foster, a junior from Indiana Hills CC, who has the size, length and athleticism to fill the role played by Josh Jackson, Svi Mykhailiuk and Marcus Garrett in recent years.

You might remember Self’s praise of his latest juco transfer from last November, after he officially signed with the Jayhawks. Self said then that Grant-Foster would have played big minutes for last year’s team. So with Devon Dotson, Isaiah Moss and Udoka Azubuike all gone, it only makes sense that the minutes will be there for him on this team, as well.

“We didn’t even know about him in high school,” Self noted of the 6-foot-7 wing who grew up just down the road in Kansas City, Kan. “And this guy went and grew three or four inches and has blown up. He’ll be a pro. And I mean an NBA pro. He’s a good prospect. He can get his own shot. He’s got vision. He can create for others.”

While Thompson and Grant-Foster have a clear path to immediate playing time, the other two newcomers may have a harder time getting on the floor right away.

That doesn’t impact how Self feels about either of them, though, and it’s clear that he is excited about having both Jossell and Muscadin on the roster.

“I love his talent,” Self said of Muscadin, a versatile big with tons of raw talent as a scorer, defender and rebounder. “He’s 6-foot-10 and skilled and he’s going to be really good. He’s just not physically strong yet like he will be. Six months with (strength coach) Ramsey (Nijem) could make a ton of difference.”

Of Jossell, a 5-11 guard from Keller, Texas, Self added: “Latrell Jossell is a little guard that’s fast and can shoot. He wasn’t highly recruited by our standards, but we’ve had a lot of guys like him come in here and turn it out. And I think he’s got a chance, a real chance.”

Are we already talking about basketball after the first football game? ;)

Did KU play a football game?? I must have missed that. All I saw was a bunch of fellas dressed in KU colors running around like chickens with their heads cut off.

Building a football team is a process that's taken over a decade and five coaches to even achieve sufficient recruiting levels to start competing. I graduated in '74 and we were a basketball school then under Ted Owens and remain even more so under Bill Self. So, yes, in this time of a deadly pandemic when we are isolated and struggling to keep "chopping wood" as Coach Mangino would say, let's talk basketball!

Wait, we stop talking about basketball??? Since when?

It would seem a bit of a stretch to say we have depth a point guard. I like our potential but we have really limited experience there. Really limited.

It’s crazy to think there are multiple lineups possible with the short guy being 6-5.