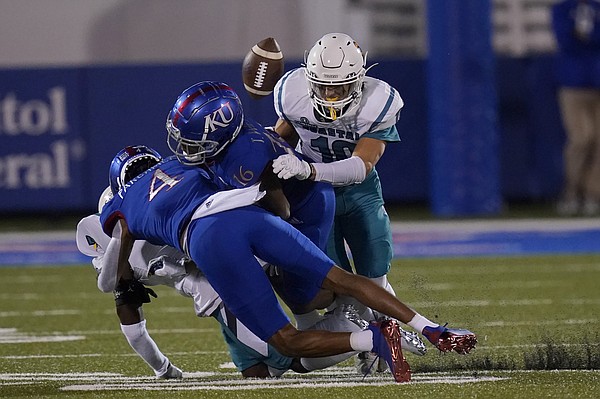 One did not need to dissect the scene too intensely to see just how tough Saturday’s 38-23 loss to Coastal Carolina was on the Kansas Jayhawks.

It sucked. It stung. And there was no doubting that these guys saw the 2020 season opener playing out differently than it did.

But there was a strange sense of calm about the way they handled it.

Well versed in dealing with disappointing outcomes, the four players who talked with the media following the season-opening loss early Sunday morning wasted no time talking about looking in the mirror, watching the film, getting back to work and putting their latest flop in the past.

And, really, what else can any of them do?

What’s done is done, and as much as fans might enjoy seeing these guys rage or rant and rave about their performance, that wouldn’t do anything to change the outcome.

Still, you can’t help but wonder how devastating of a blow this latest loss was for the big picture of the program.

When it comes to Kansas football, just about everything is graded on some kind of a curve. Even a lot of the victories come with a disclaimer or explanation attached.

So it’s not as if this latest loss — No. 10 of the Les Miles era and No. 100 since Mark Mangino was sent packing — is really all that different from any of the others. It’s just the most recent, so it no doubt feels that way.

Some fans on Twitter talked about Saturday’s first half and the 28-0 hole that KU fell into as being one of the true low points of the past five years. And far be it from me to argue with them.

But there have been so many low points during the past 11 seasons that I have stopped ranking them or even remembering them.

For perspective, you have to go back and add up parts of the previous 17 seasons, starting with Mangino’s last year (2009), to get to 100 losses for the program prior to this recent 11-season stretch. That’s approaching twice as long. And that has to leave anyone paying attention wondering when — or even if — this thing is ever going to turn.

Every time the program bottoms out, it seems to find a new way to dig just a little deeper. And each time that happens, fans everywhere find themselves asking the million-dollar question — how?

Miles was asked during his postgame session with the media if he thought Saturday’s outcome would slow down the turnaround he’s hoping to execute at KU.

“I don’t think so,” he said. “First of all, I never want to fix a team that has lost games. I would much rather fix teams that have won games. But I think we have a team that’s committed to doing things for the upperclassmen that are significant. I like the commitment the team has together. That’ll make a difference.”

After all, how else can they handle it?

“I think you just take it day by day,” said junior quarterback Miles Kendrick who finished Saturday’s game 15-of-24 for 156 yards, two touchdowns and an interception. “You’ve got to hit the film room and see where we need to get better. You’ve got to look in the mirror. And we’ve got to come out in practice and take steps forward. We can't do what we did in the past... We’ve got to get better and move forward.”

Asked why he thought this group could be the one that does that, Kendrick, like his head coach so often does, pointed to the character of the players in the Kansas locker room.

Time will tell if that happens. It certainly did not in the season opener.

To add to the misery, the caption on the photo isn’t accurate. Andrew Parchment delivered the hit that knocked the ball out.

You learn from mistakes. You don't quit. A positive attitude is vital. Kendricks's comments reflect that attitude.

Is there an NCAA record streak number for a consecutive building seasons ?????

The coaching carousel since Mangino is the reason that it feels like decades of rebuilding. Miles is building with High School football players unlike those who proceeded him and who felt the pressure to win immediately, i.e., focused on Juco players more developed physically, mentally, etc. When Miles was hired and Long asked alumni to commit to 3 years of tickets, one knew he understood that it was not to be a quick turnaround. The key is getting the 2021 and 2022 commitments to stick with KU, who could be 0-10 this year. Yes the game was frustrating, especially given that in the first half it was clear that KU was out manned (both on the offensive and defensive lines) and out coached, but there were some bright spots. They key is having a team full of bright spots. As always, I believe a coach deserves to see his first recruiting class become seniors before making a final judgment. Hopefully, 2022 will be a more promising season.

I agree with Andy. Another thing that is not mentioned much is that we are still not at a full complement of scholarship players. Yes, I know that would have had little or no impact on this game. One positive is that in the second half we outscored CC 20-10. Which team shows up for the Baylor game, the first half team or the second half team?

Love the optimism and I truly hope that Miles works out. If he doesn't, which way does the program go? They've tried high profile coaches, they've tried up and comers, and they've tried proven winners at different levels. It's incredible that no one has seen success in 11 years, so I can't believe it's all on the coaches and staff. I'm not a conspiracy theorist - okay maybe a little - but there is potentially something toxic within the Athletic Department that impedes progress of the football team. It's either the AD's, the administration or politics between the sports. It's hard to believe that there have been that many bad coaches hired since Mangino or maybe none of them were a good fit for the KU culture or the way the AD's run KU sports programs.

I completely agree that we need to shut up about MIles as coach until we see his recruited Senior Class.

The number of scholarship players is close enough to max it is no longer an excuse. Once you get to 70 scholarships you have 22, 22, and 22 (66 players) with a starter and a develooping backup at every position, offense, defense and special teams. Some schools limit themselves to less than 80. Not excusing Beaty's performance but Beaty was the only that had high school players and less than 66 scholarships most if not all of his reign. Miles has a team full of 3 Star Athletes.

At this point, 90% of KU's recruits are 3 star athletes and will be at KU all 4 years. Not many are transfers. What we don't have are, Seniors and Juniors in the same Offense and Defense scheme for 4 years, or a Quarterback with experience.

What is most disappointing in all of this is that Coastal Carolina has a defense that was quicker than KU's Offensive as well as KU's defense unable to stop CC from scoring.

IMO, this indicates to me, we picked the wrong QB to start....again, and our offense still doesn't know it's plays and responsibilities so we got caught thinking with our pants down while the CC defense over ran us, the KU defensive line needs some speed and strenght and also doesn't know their plays is overthinking while getting beat. You should know what your supposed to and jsut do it without thinking. Also, Parchment played really bad. No separation with a bunch of drops.. Finally, WE MUST STOP TURNING THE BALL OVER AND MAKING STUPID MISTAKES.

0-10 with all kinds of humiliation and embarrassment. Welcome to another losing season of Kansas Football. What a pathetic joke.

Well, at least we can be sure that there will be social distancing at Memorial for every game this season.

Seems to me there have been a lot of changes, way too many, starting with the A.D. who hired Mangino in the first place.

The firing of Mangino

One of the all time greatest mistakes in college football history. Actually it could be number 1.

Letting Glen Mason getaway was a way bigger mistake. Mangino had one good season and that was based on a fluffy B12 schedule. He went 1-4 v. Snyder and had a losing record in conference play. Mason was a solid coach. He fielded competitive, hard-nosed outfits.

The offsides call was devastating, I think KU could have scored on that possession, even if just 3, cutting what was a 28 point lead to 9, or possibly just 5. The initial turnovers gave them momentum. Also, the non-facemask. that 15 yards would have put us in easy FG range at the end of that drive. Yes, we shouldn't have been in such a bad situation, but those blown calls by a SUN BELT crew were really bad.

I'm starting to think Dearmon isn't the offensive god I thought he was.

One other observation: Macvittie is FAST! Hopefully they utilize his speed more.

Dearmon is fine. KU didn't execute because the players don't know the plays, and are unsure or nervous and overthinking. Turnovers, dropping the ball, poor QB play in the first half.

These guys need to get it together and stop making stupid mistakes. The coaches need to make sure that each and every player knows exactly what they are supposed to be doing even in their sleep so they can just play the game. One guy unsure of what to do and the play is blown.